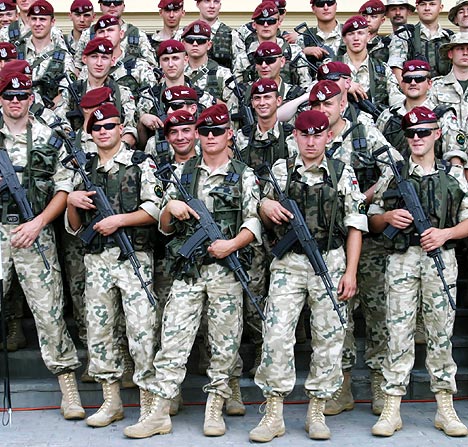 Though not much is being said about the Ukraine in U.S. mainstream news circles, the tension in Europe is being stretched to a near breaking point.

A few weeks ago the country of Estonia warned that their sources indicated that the Russian Army was are preparing an invasion of the Western-supported Ukrainian government. The President of the country’s provisional government has since deployed at leas 40,000 troops to its Eastern front as a countermeasure should Vladimir Putin’s 80,000 strong military cross its border.

In Poland, which sits in a region that has been party to just about every European engagement in modern history, leaders are concerned with the possibility that a Russia/Ukraine conflict would spill over to its country.

According to a report from The Week Polish military reservists are being called up by the thousands, presumably to prepare for the possibility of not just spillover, but all out military confrontation with Russia.

At least 7,000 reservists have been recalled to the colours for immediate exercises lasting between 10 and 30 days.

They’re told by the Polish authorities that the call-ups are “routine”: but the men say they haven’t been asked before and they’re well aware of the growing alarm in Warsaw at President Putin’s aggression. Three weeks ago, their Prime Minister, Donald Tusk, called a press conference to warn that “the world stands on the brink of conflict, the consequences of which are not foreseen… Not everyone in Europe is aware of this situation.”

But in the worst case scenario of a truly revanchist Russia, Poland certainly has the borders from hell.  Starting from the top, it abuts Kaliningrad (the Russian exclave on the Baltic carved at the end of the war from East Prussia), Lithuania, Belarus and Ukraine.

None of these borders relies on any natural barriers like rivers or mountain ranges – they are just lines on a map drawn by Stalin in the full flush of victory.  No wonder the Poles are feeling vulnerable.

And we should be worried, too. Poland is both a Nato and EU member.  We are bound by solemn treaty to defend her in case of attack.  Violation of Poland’s territorial integrity was after all why we went to war reluctantly in 1939.

Poland is one thing but there are other states in Russia’s shadow who are members of both Nato and the EU. Would we fight for the vulnerable Baltic states should President Putin turn the screws on them?

This is the first time in Poland’s history that they have called up their reserve troops, so whatever prompted the mobilization is likely of serious concern.

As cited by Before It’s News Glenn Beck reports that Vladimir Putin is now preparing his forces for an assault on other former Russian satellite countries as well.

Anybody who is in a former Soviet state sees the writing on the wall, that Putin can go in and do whatever he wants and nobody can stop him.

What happened two weeks ago with Russia, Putin on Monday said ‘I’m not going to annex Crimea. We’re just going in to help them keep the peace.’

By Friday, four days later, he signed the annexation. He could tell the world didn’t care, so much so, that he just signed it.

Here are your choices… do nothing and look at possible World War III because what you’re going to see is that Russia will start to sweep across its former satellites and then possibly more, and we will have the situation as we had on our hands in World War II, and that is probably England will come to us and say “you’ve got to be involved otherwise this thing is going to be on your door step.”

So, you can either sit it out or do nothing… which will end up probably in World War III, or hopefully a cold war.

Or… you can get involved in World War III [right away]

Perhaps this is all just posturing by Vladimir Putin and his European counterparts.

But what if Putin does cross into Ukraine… and then Poland and other former satellite countries?

What will America do?

Are we prepared to protect the territorial integrity of Poland and other EU member states? The consequence could well be World War III, nuclear weapons and all?

President Obama has remained largely silent, save for empty threats and “economic sanctions” that include seizing the financial assets of a handful of Russian diplomats and businessmen.

Russia, on the other hand, has flexed its muscle by not only deploying troops, but annexing half of an entire country. It seems that Vladimir Putin believes himself to be unstoppable in his efforts to return Russia to its former Soviet glory.

Will Obama and the rest of the world sit idly by and watch it happen?