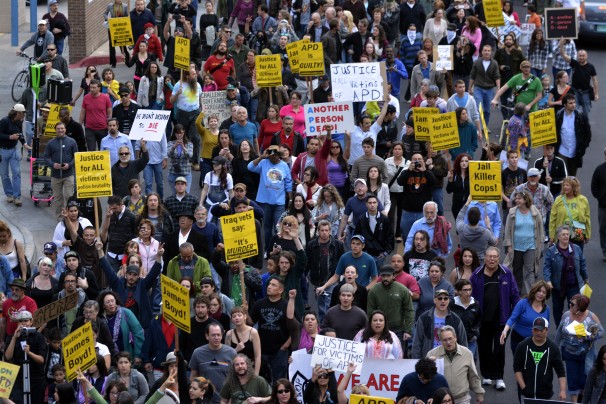 APD is an acronym for the Albuquerque Police Department.

In light of the string of recent fatal shootings by APD officers, some protesters have changed the meaning of the acronym to something chillingly appropriate:

On March 16, APD officers executed James Boyd, a homeless man who was camping in the Sandia Foothills in the outskirts of Albuquerque.

On March 25, citizens marched through the streets of downtown Albuquerque to APD headquarters to protest the shooting of Boyd and others shot by APD officers. At least 1,000 people attended, including a number of elected officials, including State Rep. Moe Maestas, D-Albuquerque, and City Councilor Rey Garduno.

KRQE reported from the rally:

A few hours after that protest, APD officers shot and killed another person.

The victim, Alfred Redwine, was killed outside a public housing complex after officers received a 911 call from a woman who said Redwine had pointed a gun at two young girls. Police arrived on the scene and tried to get Alfred to come outside. When he did, he was shot by police.

Police say Redwine had a gun and that he fired shots at them first.

But witnesses are contradicting that story.

Tammy Redwine is Alfred’s sister. She and her boyfriend are two of the witnesses who told reporters what they saw that night:

Ernie Garcia, 43, Tammy Redwine’s boyfriend, said that before police arrived, the 30-year-old had gotten into a dispute with neighbors who were partying next to his mother’s vehicle. When police arrived, Redwine didn’t come out “because he was scared of police,” Garcia said.

Tammy told KOB.com that her brother didn’t have a gun, and that she tried to get him to come out of the house to talk to the police:

“He did not have a gun. He only had a cellphone. I know because I was talking to him and telling him to come out and talk to the police.”

She was standing outside of his house, on the phone with him. Also there, Albuquerque police. “He’s all no sister. He’s all they’re going to shoot me. He’s like, I know they’re going to shoot me sister. I told him, no they’re not. The lieutenant promised me that they will not shoot you. He’s not here for that. He just wants you to come out,” said Tammy.

Tammy said the APD is lying about her brother shooting at them:

Other witnesses told KOB that Alfred didn’t have a gun:

The Albuquerque Police Department has been under investigation by the Department of Justice since November 2012 over several high-profile abuse cases and three dozen shootings since 2010. In spite of that, the man who designs the department’s training programs has been teaching officers to use MORE deadly force.

The loosely organized internet hacker group known as Anonymous released a video on Wednesday, in which they refer to APD officers as “militarized thugs” and warn them of possible retribution for the police shooting of Boyd.

The video states “We drastically need to address the growing police state that has occupied our country,” the figure says. “… Let them know that your city is not a place for war games against the homeless and the less fortunate.”

The group urged the people of Albuquerque to “occupy” APD headquarters on Sunday, and warned of a cyberattack on the department’s websites: