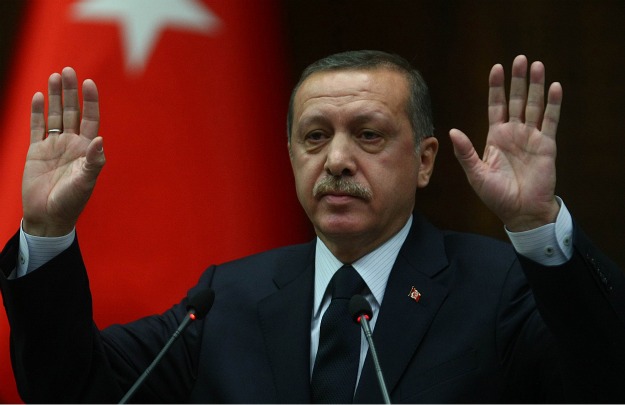 The mainstream media has spun, mischaracterized and outright lied about a shocking leaked audio tape in which top Turkish military and political officials brazenly plan to stage a false flag attack on their own country in order to create a pretext for war on Syria.

Shocking details of dialogue between top Turkish officials reveals clear evidence of them scheming to launch a staged provocation against Turkish interests that would be blamed on Syria as a justification for military invasion.

Turkish Prime Minister Recep Erdogan admitted the authenticity of the tape when he described the leaking of the audio as “villainous” and “immoral,” before moving to ban YouTube.

“I’ll make up a cause of war by ordering a missile attack on Turkey,” states Hakan Fidan, the head of Turkish intelligence.

Plans to attack the Suleiman Shah Tomb, which is in Syria but considered Turkish territory and guarded by Turkish special forces, are also discussed, with Al-Qaeda terrorists playing the role of patsies.

“Prime Minister said that in current conjuncture, this attack (on Suleiman Shah Tomb) must be seen as an opportunity for us,” states Ahmet Davutoglu, the Minister of Foreign Affairs.

“We can also prepare an attack on Suleiman Shah Tomb if necessary,” responds Fidan.

“Listen, listen commander if it’s a pretext we’ll give you one. I’ll send over four men and have them fire eight rockets on an empty lot. That’s not the problem! Pretexts can be arranged,” adds Fidan.

Ambassador Feridun Sinirlioglu responds by asserting that the staged attack will have “legitimacy” because it will be seen as a strike against Al-Qaeda and Turkey will have “the whole world backing us”.

“If necessary, we’ll mount an attack against that place (Suleiman Shah Tomb),” states Fidan, adding, “we’ll do the attack up front.”

To be clear, this confirmed audio tape represents ‘caught red handed’ concrete evidence of Turkish officials planning attacks on their own country to be blamed on Syria as a pretext for military invasion.

The officials also consider how the U.S. would react to the plan, fearing that it could backfire because Turkey may be perceived as weak due to its inability to protect its own interests.

Following yesterday’s bombshell revelation of the false flag plot, the mainstream media reacted in unison by ignoring the shocking content of the actual dialogue and instead making the story about how Erdogan banned YouTube, without specifically explaining why it was banned.

Innumerable news outlets euphemistically described the tape as containing discussions about plans for Turkish “intervention” in Syria, mischaracterizing the context and censoring the fact that the tape was a brazen admission of high Turkish officials planning a staged provocation as a pretext to attack Syria.

Reuters even reported that the conversation, “appeared to centre on a possible operation to secure the tomb of Suleyman Shah,” when in reality the conversation is about attacking the tomb, not securing it.

A BBC News report about the tape said it “relates to a discussion of possible military operations in Syria,” completely omitting the fact that the tape is centered around Turkey attacking its own interests in a staged provocation.

A CNN report goes to great lengths in exploring how and why the audio tape was leaked while failing completely to mention its actual content.

An L.A. Times report states that the tape discusses “possible military intervention in Syria”. Although the article quotes some portions of the tape, it completely omits key sections where Turkish officials admit they plan to launch false flag attacks.

Although a Washington Post article about the leaked tape prints the full transcript, the actual report mischaracterizes it by asserting, “The officials mull whether to strike — or even use ground troops — against the Islamic State of Iraq and Levant, a jihadist group rooted in Syria.” The article fails to mention anything about Turkish officials planning to “make up a cause for war” by launching an attack against their own country.

None of these major publications dared to reveal the actual core of the story – that the tape contains bombshell revelations of Turkish military and political officials planning attacks on their own country as a casus belli for war on Syria.

Only USA Today somewhat accurately covered the story, reporting that the tape revealed, “that top Turkey officials were plotting to fake an attack against their own country as an excuse to wage war on Turkey.”

Given Turkey’s NATO membership and its close ties with the United States, this scandal is at least on a par with the Benghazi stand down yet has received minimal and almost universally distorted media coverage given its staggering importance.