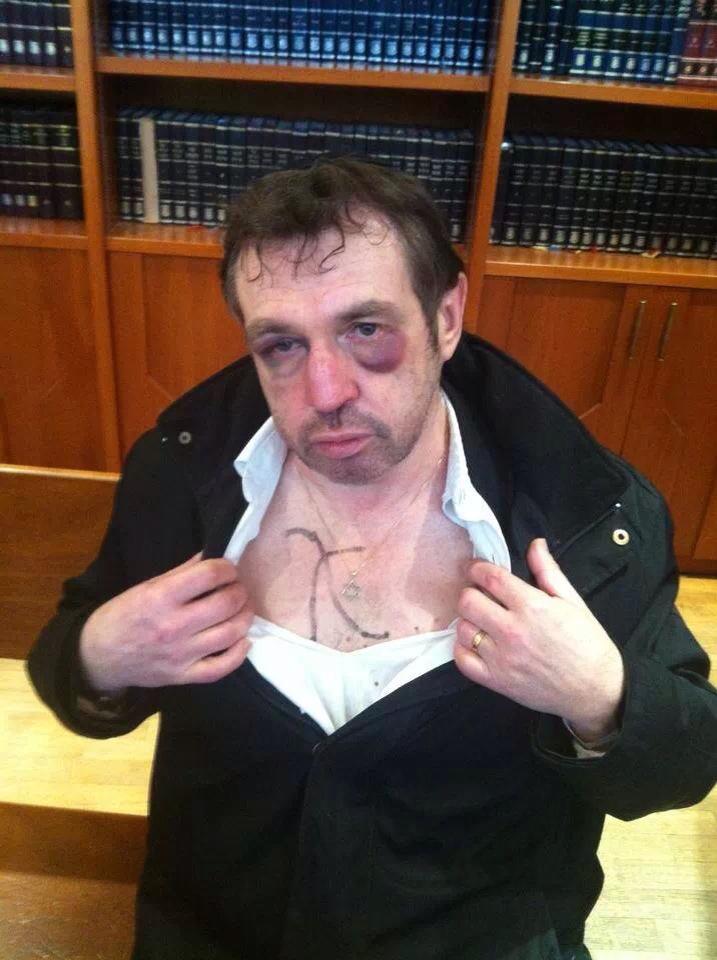 The relentless attacks on Jews by Muslims have made living in France impossible. Jews are leaving France in droves, and this is why.

This is happening in every country in Europe, including the Scandinavian countries. Hatred and violence are driving the Jews from the continent again. If this continues, and I see no sign of any meaningful action or reaction, this time Europe will not recover. And if it does, it will be 100 years from now, or more.

Victim Breaks Down in Footage From Aftermath of Brutal Anti-Semitic Attack in France (PHOTOS/VIDEO),” Algemeiner, March 27, 2014

The Algemeiner has acquired photos and footage from the aftermath of a horrific anti-Semitic attack that took place in Paris, France late last week.

Speaking on camera a day after his assault, the victim – a 59-year-old Jewish teacher only identified as David – said he was attacked by three North African “Maghreb men” at 10 p.m. on March 20 after leaving a kosher restaurant in Rue Manin, Paris, and making his way to a subway station.

“They started to curse me out: ‘dirty Jew,’ ‘death to the Jews,’ ‘son of a b***,’ etc. Then they started to beat me up,” David says in the clip before breaking down in tears. “I was hit on my face, I got my nose fractured… And then one of them took something out of his pocket, I thought it was a knife… It was a marker… And this is what they did to me (showing his chest), a swastika as they were screaming ‘dirty Jew.’ ”

David then shows the Nazi symbol drawn on his bare chest by the attackers. When members of the public started coming close to the scene of the attack, the assailants ran away and yelled “we are not finished, we’ll get back to you!!” he said.

David, who was wearing a yarmulke at the time of the assault, is still being questioned by police in charge of the investigation but the attackers are still free, a source told The Algemeiner. No arrests have been made.

Rabbi Levy Djian, a Parisian living in New York, said the video proves that the safety of Jewish people in France today is unstable.

“As a rabbi to the French Jewish community in New York I am often solicited for helping students, young entrepreneurs and even families to immigrate to the U.S. and Canada in order to live safer and more free as Jews but in the past year the numbers of requests have multiplied!” he said. “Now I understand even more why.”

“It happened right near the main Jewish neighborhood of the 19th district of Paris where I grew up. Often my family and friends who are still in France tend to ignore the rise of anti-Semitism and its danger, but this recent video shows that it’s real,” he added. “It’s the first time that we get to actually see and hear the victim of such a brutal and obvious anti-Semitic attack perpetrated by young uneducated Muslims and it makes us realize what it really feels like.”

The assault was originally reported on Saturday by the Jewish Telegraphic Agency.

At the time, Paris Mayor Bertrand Delanoe said in a statement, “This act of unspeakable cowardice is a betrayal of the foundation of the Republic and the values ​​of Paris,” according to Paris’ Le Parisien.

The attack took place only days before local elections in France on Sunday, which saw strong gains for the nationalist National Front party. In an interview published Sunday, Yonathan Arfi, vice president of Jewish umbrella group CRIF (Conseil Représentatif des Institutions juives de France), told The Algemeiner there is a growing trend in France wherein the political far left connects with the extreme right over a common hatred of Jews.

“What is very worrying for us is when anti-Semitism makes the link between extreme left and extreme right,” he said, referring to a major Paris rally earlier this year where marchers chanted “Jew, France is not for you.” At the demonstration “there were people from the extreme right mainly but some people of the extreme left as well,” Arfi said.

Anti-Semitic attacks in France are reported with some regularity. Earlier this month Israel’s Ma’ariv reported that a young Jewish woman was assaulted at a laundromat in a suburb of Lyon by a mother and daughter of Arab descent who shouted, “Dirty Jew, go home to your country, Israel.” Last week, an Israeli man was attacked with a stun gun outside a synagogue and a week before that a French Jew was assaulted on the Metro.

The second anniversary of the infamous Toulouse attack on a French Jewish school was marked recently. Four people, including three children, were murdered in the Islamist attack.

See photos of the victim’s injuries from the aftermath of the brutal assault below: