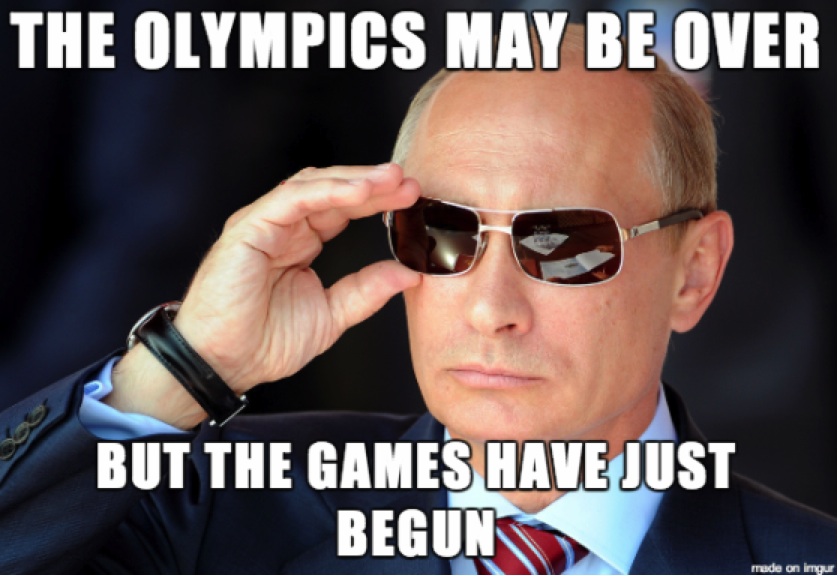 Being a former college basketball coach, I marvel at the skill of a good strategist who can carry out a game plan. Vladimir Putin would have been a great college basketball coach, a masterful poker player, a top used car salesman and he is an excellent leader of his country when it comes to foreign policy. Putin has made the Federal Reserve, Wall Street and our government look amateurish.

If it wasn’t for the fact that Putin has the potential to be one of the most despotic figures in all of history, I would be a fan of his cunning and his ability to carry out an agenda on multiple fronts with precision and skill.

However, there is one group that Putin does not outfox, out-strategize and out maneuver; that would be the forces controlling the Bank of International Settlement (BIS).

Putin is developing almost a cult following among some people in the alternative media. To them, he represents a man with the force of conviction to tell international banking to go to hell. To these well-intentioned, but misguided analysts, Putin has succeeded where other world leaders have lost their lives (e.g. JFK, Hussein, etc.). As romantic and appealing as a superhero may be who will ride in and save the world from the evil bankers, nothing could be further from the truth when it comes to Putin. Whether Putin realizes it or not, he is doing the complete bidding of the big boys at the BIS and everything is moving right along according to plan.

This article explores the fact that Putin, although he may be, on the surface, resisting international banking on one level, he is very much under their control on another level. This article will also explore the implications for these events upon the American people.

In the alternative media, many make the mistake of speaking about the “banksters” as if they were one entity all working towards the same goal which is the establishment of a singular economic system which controls the planet through rabid debt management. Generally, this is true. However, the process of international banking is compartmentalized and when goals are not met, we see divisions emerging and this is exactly what we are witnessing at the present moment.

Before we can effectively analyze how Putin is in the process of putting himself in charge of the world’s chessboard, we need to first take a very brief look at how international banking is organized.

Level One: The Bank of International Settlement

International banking has three major levels. The executive directors of this grand economic scheme, the Bank of International Settlement, from Basel, sit at the head of the table. The BIS sets global economic policy by manipulating currency exchange rates (e.g. IMF), establish lending rates, picking national winners and losers, etc. The singular mission of the BIS is to march the world’s central banks into the NWO that they control.

It can be said that the forces, both known and unknown, are the rulers of the planet.

The second level of power consists of the global central banks including the Federal Reserve which is an unelected cabal of private bankers who have wrestled the financial power of this country away from Congress and control the nation’s money. It is the same in every country. And of course, if an entity controls the money of a nation, they also control those who use their money through the establishment of a predatory debt enslavement system. You learned this principle of finance as a teenager when your parents told you, “For as long as you live under this house, you will do what I say.” The power of the purse determines who controls behavior. The world’s central banks take their marching orders from the Bank of International Settlement because the monetization of the fiat currency that each central bank controls is determined by the BIS.

It can be accurately stated that the central banks are rulers of nations and represent mid-level management in the hierarchy of the process.

The third level of power in this unholy system are the financial institutions of a nation. In our case, this would be institutions such as Goldman Sachs, other lesser Wall Street investment houses as well as the megabanks (e.g. Bank of America, Chase, Wells Fargo, etc.). Policies that are developed in Basel are implemented by these institutions.

The investment houses conduct the day to day management of the polices which flow downhill from the BIS.

Finally, there is everybody else and that would be the sheep of this country who know nothing of how any of this works. Don’t hold your breath on a sudden level of developing awareness, most of us are all too brainwashed by the system to achieve this level of awareness.

The Game Plan for Building a New World Order

Since the 1944 Bretton Woods Agreement which established the dollar as the world’s reserve currency and the US was made the de facto world policeman as a result, Americans have enjoyed economic dominance because in order to buy energy, the world needed to purchase dollars from our Federal Reserve. After the world departed from the gold standard for the fiat currency standard, the US is the only country that truly enjoyed a solvent currency and our standard of living has reflected this status.

Americans have been allowed to enjoy this most favored status because it became our task, on behalf of the BIS, to put together coalitions of central banks to force unwilling nations into this system. And when a nation, such as Libya and Iraq, attempted to swim upstream against the debt enslavement policies of these banks, the leaders were murdered and the people become indentured debt slaves. The cost to America is endless war, massive debt and a reputation for being the “Great Satan”.

Virtually, all nations have succumbed to this tyranny, with two notable exceptions, Russia and China. To a lesser extent, India has also become problematic for the BIS since they have joined Russia and China in using national currency and/or gold to conduct trade among each other rather than using the “required” dollar.

If the BIS is going to realize its dream of New World Order, Russia, China and the United States economies must all be crushed. For when the world lies in ruin, out of chaos will come order. Putin is the main driving force in making this a reality.

Putin Has Checkmated the Central Banks At Level Two

Putin is defeating the world’s central banks at two levels. One, he is spearheading an effort to move the world away from the dollar as the world’s reserve currency. This is what the Syrian and Iranian crisis was all about (e.g. selling oil for gold rather than the Petrodollar) and Putin exposed Obama’s false flag event (i.e. gassing the Syrian rebels) for what it really was. Further, Putin now has the power to refuse to accept the dollar as payment for his gas flowing into Europe. If the Petrodollar dies, what will happen to the US economy? If this does happen, we will find out very quickly why DHS purchased 2.2 billion rounds of ammunition to go with its 2700 armored personnel carriers.

Second, Putin is threatening to become the main supplier of energy on the planet. With the consummation a recent gas deal between the Russians and the Chinese, Putin is undermining the control of energy that the central banks have enjoyed since the early days of the creation of Saudi Arabia to oversee oil production.

Putin is spitting in the face of the Federal Reserve and the other G7 central banks by encouraging Iran to sell its oil for gold. This is turning international finance on its head. Putin also has enough of a military presence, along with nuclear weapons, to stave a direct conventional invasion of his country. Putin has positioned himself to control the energy needs of Europe as the Europeans will be forced to choose between heating their homes or remaining a military ally of the US. This will eventually lead to a disintegration of NATO, thus enhancing Putin’s military power by comparison.

The march of the G7 toward consolidating national power under the central banks has stopped dead in its tracks. Russia, China, India and to a lesser extent, Brazil and South Africa are now charting their own independent economic course. When Libya refused to regionalize and weaken its currency and they were adamant about avoiding the debt slavery, their leaders were murdered and their country was conquered by al-Qaeda proxy forces supported by the funds of the G7.

However, Russia and China are not Libya and Iraq. Both nations possess nuclear weapons and sizeable armies. For the moment, the dream of a New World Order appears to be dead. Or is it?

The BIS Employs the Sun Tzu Strategy of “Death’s Ground”

The G7 central banks are impotent against Putin as he has outmaneuvered them at every turn. But for the big boys at Basel, things are proceeding according to plan. If the BIS has to sacrifice some of its central banks to get what it wants, so be it. The BIS will also think nothing of fermenting the conditions for the next world war.

Over 2,000 years ago, Chinese military strategist, Sun Tzu, imparted a knowledge of military strategy which is still being taught in our service academies and in our war colleges. One of the primary principles of Sun Tzu consists of the concept of placing one’s soldiers on “death’s ground” if you want them to fight hard and achieve victory against all odds. The best military example that comes to mind is what happened to the WWII Normandy invasion force at Omaha Beach on June 6, 1944. These men were thrown onto a beach where there was no retreat and they were only going to leave the beach dead or victorious. The BIS has employed a Sun Tzu strategy of placing its second level of power, the central banks, on death’s ground. The G7 central banks will conquer Putin, or they will die. However, before rigor mortis sets in, the G7 nations will commence a world war based on economic survival. Again, out of chaos will come order.

The failure of the central banks to corral and control Putin has made World War III a likely scenario. As Putin continues on the path of destroying the dollar as the world’s reserve currency, what will the Federal Reserve do? There will be a war to preserve the status quo. As China, Russia and the United States are drawn into a confrontation, the world’s economy will be obliterated along with billions of lives. In the aftermath of the coming global holocaust, the supreme financial rulers of the planet will be waiting to create order, the New World Order, out of chaos.

A willing pawn of the NWO, or not, Putin is no hero. He is doing exactly what is expected. Make no mistake about, the BIS controls the central banks, world finance and Putin. The New World Order is very much alive.