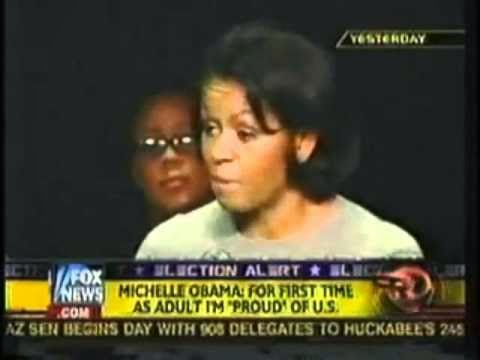 “For the first time in my life I’m proud of my country.”

Barack HUSSEIN Obama…America’s first ‘supposedly’ black president…a man who many held high hopes for as being the bridge between the races has proven to be NOT a bridge but a swirling tornado of racial divide and hatred…so much so that he has made racism in America an excuse to be used as a way to escape personal responsibility of all kinds.

And under this president the race card resurfaces any and every time a black liberal ‘supposed’ leader is criticized, when any Democrat is criticized, when Obama’s many economic and foreign policy failures are criticized, and when it’s needed simply to stir up racial tensions. And liberals relish in claiming that America as a whole is a racist nation simply because they say it’s a racist nation…never mind that we have a ‘supposedly’ black President, a black Attorney General, and 43 black members in the House of Representatives and one in the Senate…none of whom could have been elected without a substantial number of white ‘anything but racist’ Americans supporting them.

And like sheep to the slaughter the overwhelming number of blacks in America continue to support Barack HUSSEIN Obama just because he has dark skin NEVER minding that he has done NOTHING to help them out of the cycle of poverty that seems to dog generation after generation of blacks…NEVER minding that he has done NOTHING to help them get off the government teat. When he ran for president, Obama made countless promises to black Americans…promises he NEVER intended to keep…promises just so they would vote for him. After all his skin color matched theirs…but once in office their lot in life has remained the same or for many has gotten even worse, because now through his actions or lack thereof…through his words of hate…the scabs of long healed racial wounds have been ripped open to bleed raw once again.

And this was calculatingly intended, oh so wanted, and heralded by the left.

But none of that matters for many in the black community are just happy to have a ‘supposedly’ black president, and for them Barack HUSSEIN Obama can do NO wrong. Never mind that the black unemployment rate is double that of white Americans…never mind that 27+% of black Americans live in poverty…never mind that according to the latest census 26.4% of households who actually report (many do NOT) receiving food stamps are blacks even though blacks make up only a mere 13% of the American population…never mind that only 63.5% of black students graduate from high school…never mind any of that for Obama’s skin being dark is all that matters to many of color…sadly to most but thankfully NOT to all.

And with black America currently NOT being a viable force in America’s economic recovery what with the rise of newly emerging economic powers in both Asia and Africa, and as white America is losing patience with those who are NOT carrying their own weight…with those wanting what we have but who do NOT want to work for it…the downward economic and social spiral of black Americans continues.

And this is somewhat of a conundrum as there are men and women of color who have risen out of the black downward spiral who embrace conservative values and ideals yet whom black community leaders across America insist on calling ‘Uncle Tom’s’ or worse…black men and women who through hard work, focus, and dedication have attained the American dream…throwing off the very ‘chains’ the black leaders themselves had encased them in.

Men and women like former Congressman LTC Allen West, former presidential candidate Herman Cain, South Carolina Senator Tim Scott, Dr. Ben Carson, former Secretary of State Condeleeza Rice, and Congressional hopeful Mia Love…all who have made it…all who did NOT think they were ‘owed’ something…all who knew the importance of education…all who have put their race in the background moving their ideologies…their beliefs…their values and vision for America into the forefront …as it should be…instead of playing the race card to win solely based upon the color of their skin.

And white America…conservative America…embraces them NOT even noticing the color of their skin.

And to those like Jesse Jackson, Al Sharpton, Louis Farrakham, Eric Holder, Elijah Cummings, Alcee Hastings, Shelia Jackson Lee, and of course half-black Barack HUSSEIN Obama…being black…playing the black victim…is the sole way they can justify their miserable, hateful, bigoted existence. Even though they’re successful at playing the victim it’s obvious they’d trade it all in a heartbeat to be white, but if truth be told they’d fail at being white as much as they fail at being black…for their failures in credibility and honorability are NOT because of their skin color but because of who they are inside.

These aforementioned men and women have so played the race card…the victim card…screamed the ‘hate whitey’ rant for so long that they’ve tainted the opportunity for true black conservatives to really shine without their own race turning against them…tainted it so bad that America might NOT see another black president for 20 or more years…for a generation.

And that would be sad for there are many of color who would honor our Constitution and all it stands for unlike the man who currently holds the office and those liberal white Americans who worship at his feet simply because they think supporting him shows they are NOT racists.

Hate to tell them but it does NOT show they are NOT racists…all it shows is that they have bought into the media created myth of Barack HUSSEIN Obama being the ‘savior’ of us all.

And like Michelle finally being proud of her country…that above all else that is the saddest thing of all…period. 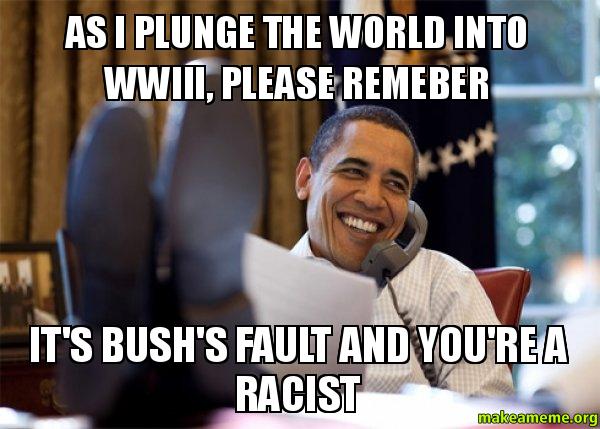