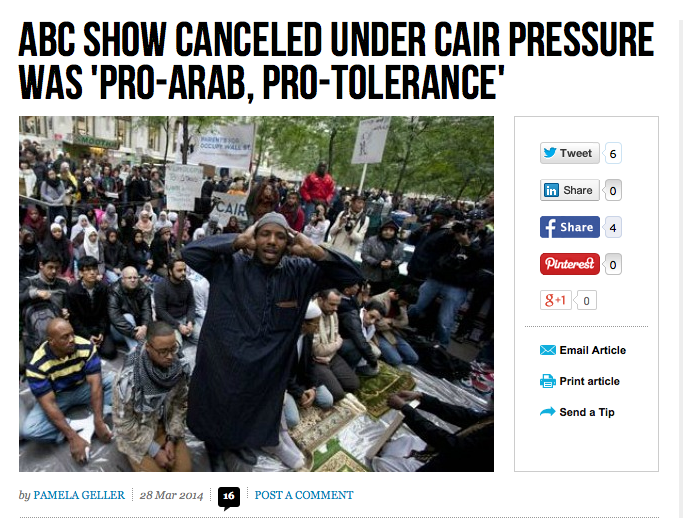 Brooke Eikmeier, creator of the now-canceled ABC Family show Alice in Arabia, is upset that the network has canceled, sight unseen, what she describes as a “pro-Arab, pro-tolerance” TV series.

Alice in Arabia was canceled under pressure from the Hamas-tied Council on American-Islamic Relations (CAIR), as I wrote last week.

CAIR was claiming that the show was going to be “Islamophobic,” but Eikmeier says that “the intended series could have been a step in the right direction for all cultures and all women, sparking greater tolerance, understanding and empathy.” She laments that “success was easily within reach to achieve a goal many in the Muslim community want: a series that showed them fairly and with admiration and complexity, that would give opportunities to Arab writers and Arab actors.”

However, “blinded by the stereotype the mob had of the typical Hollywood writer, however, those imminent jobs have now disappeared. That is no victory, in any form, for anyone.”

It certainly was a victory: it was a victory for Islamic supremacist thugs who want to shut down all speech that could possibly be construed as remotely critical of anything Islamic.

ABC and the writers and producers of Alice in Arabia were sufficiently subjugated and in service of Islam. Sure, the show was “pro-Arab, pro-tolerance”–in other words, it wasn’t going to dare to utter a single critical word about the Islamic oppression of women or anything else Islamic.

Eikmeier explains that the language in publicity material that set CAIR off–about an American Muslim girl being kidnapped by Saudi relatives–was inaccurate:

…when I read the description of the episode, I had a sinking feeling. The show is a “high-stakes drama series about a rebellious American teenage girl who, after tragedy befalls her parents, is unknowingly kidnapped by her extended family, who are Saudi Arabian,” the synopsis read. “Now a virtual prisoner in her grandfather’s royal compound, Alice must count on her independent spirit and wit to find a way to return home while surviving life behind the veil.”

I cringed at kidnapped, as it implied some violent action that was never taken (her grandfather simply refuses to let her return to America for a very specific family reason revealed in the last scene of the pilot). Virtual prisoner was an overhyped phrase I would never have personally used, and surviving life behind the veil was the exact opposite of the cultural tone I was trying to achieve. I wanted to show issues that went far beyond what I now considered a petty argument about a women’s choice of clothing.

But that wasn’t enough. The description of the show gave CAIR the impression that Alice in Arabia was going to speak with at least some honesty about Islamic jihad, subjugation and oppression. How dare they? Those filthy kuffar should have known that it’s not enough to advance the dishonest, fictional narrative of Islam as a “religion of peace.” No, any connection of jihad to jihad, sharia to sharia is blasphemy: it’s a crime under Islamic law, and politically incorrect under the prevailing leftist rules.

Just as I correctly surmised in my previous Breitbart article, the pilot of Alice in Arabia was most assuredly written in deference and submission to Islamic law (sharia). Despite the myriad real-life cases of the kidnapping of infidel children by one Muslim parent, I was rightly certain that Hollywood would take the side of the oppressor. This is consistent with Hollywood’s mores. They are decidedly behind the curve, not in front of it. They have consistently advanced the totalitarian narrative of the day–communism, Stalinism, racism (remember Birth of a Nation). It isn’t until after the right and the righteous have made their case to freedom-loving peoples that Hollywood comes around, as if it had been their idea all along.

We are still waiting for Hollywood to tell the truth about the Islamic jihads in Sudan, Egypt, Libya, Thailand, Burma, Israel, the Philippines, Nigeria, and on and on. Instead, we have to suffer through movie and movie featuring Serbian and Russian terrorists and the rest of Hollywood’s nonsensical narrative, while thousands of victims of Islamic jihad around the world die the worst of deaths–but it’s all good, because the mission and goal of the invaders and Islamic supremacists has been served by their dogs in the media and pop culture.

As I noted last week, “this Islamic victory over truth and art goes far beyond ‘Alice in Arabia.’ The TV and film industry are on notice. Invest in a film or a pilot concerning this subject matter, and you will be cut off at the knees (or the head).”