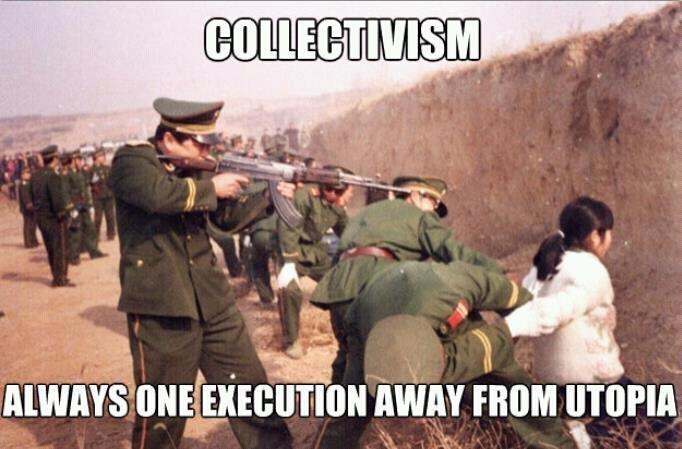 It’s plain and simple. Every political ideology that supports collectivism over the liberty and rights of each and every individual citizen is a hoax. Socialism and Communism have proven to be total failures. Social Liberalism, as the Democrats practice and push in this country today, is well on its way to proving the same truth. Entitlements, created to buy votes for the entrenched political class, have all but bankrupted the country.

Socialism and Communism in all their various forms are unworkable because they go against basic the human values of individual freedom and rights, because they seize wealth from productive people and create dependency on government in those who are already unproductive. Under such a system, only those who hold political power, the politicians, bureaucrats and other apparatchiks of the power structure, enjoy true freedom. The rest of us must toe the mark.

In an era when freedom and individuality ought to be flowering everywhere on the globe, oligarchic dictatorships are flowering instead. In Russia and China they are visible dictatorships. But in the US, where Obama and the Democrats are rapidly stamping out all opposition, they are gradually taking on the characteristics of collectivist dictatorship, as well, by stamping out individual rights and freedoms in favor of “rights” conferred upon groups: gays, blacks, the transgendered and other “blocs.” In other words, false collective rights are replacing legitimate individual rights, gradually denying everyone freedom. The individual who does not fit into some recognized group is deliberately, significantly and actively excluded from the mainstream of society, just as the Jews were excluded from Nazi society and as Christians are murdered and disenfranchised in theocratic Muslim countries.

Wherever collectivist forms of government are established, a group always emerges to exert complete control. It may be led by a strong man (Fidel Castro, Vladimir Putin) or by a committee (post-Mao China, post-Khrushchev Russia). Eventually, under collectivist rule, free elections are suspended or replaced with fictional “elections” that are fixed so that certain people get elected. As prescribed by Saul Alinsky, Obama’s biblical oracle, the government takes over health care, education, the press and banking. Obama care is already destroying the best private health care system in the world. In the press, real information is replaced by propaganda. And in education, Common Core is nothing more than an attempt to seize control of all content being taught in schools. And everywhere, Political Correctness is used as a potent weapon against all free speech and free exchange of ideas, not only on university campuses, but in American life in general. Thus, people cannot distinguish truth from lies. This is because truth is strength, while ignorance is weakness, and only the ignorant or weak can be subjugated. Only truth can set a people free, and, as Frederick Douglass asserted, once a person is tastes freedom, he no longer chooses to be subjugated.

The promises of collectivism are a hoax and the resultant policies of collectivism benefit only those who are in power. When politicians of any party try to sell the American people on the evils of individualism and the value of collective rights, it is wise to beware. When they knock tradition and tell us that it is time to scrap the Constitution, be very wary. And when they say that we should give up some of our freedom for a false safety that they promise to provide, we should shout them down loudly, because they are trying to dismantle the vast web of personal freedom that is supposed to be the standard for American society.

All politicians who break faith with the American people are dangerous and should be distrusted. At every election cycle, they should be rooted out and their policies scrapped. People who steal and cheat are supposed to go to prison, not to the US Congress and Senate. Those who even attempt to steal our freedom and rights should suffer the same fate. We the people may not be able to imprison them, but we can see to it that they never again have the opportunity to tamper with our freedom and rights. We must listen carefully to what all politicians say and to the promises they make, because if we are not careful we may buy their lies and throw away our precious freedom.