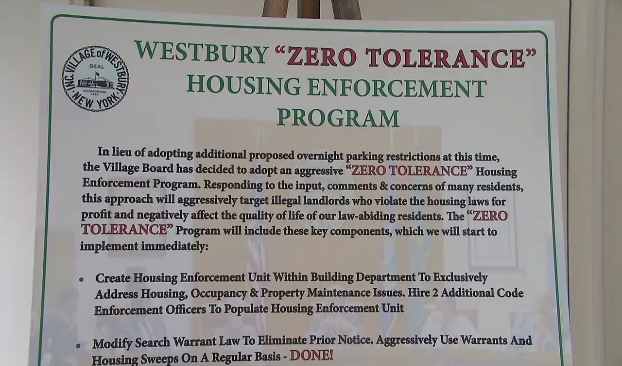 Authorities in Long Island have launched a crackdown on homeowners who rent their house out to tenants who have not been registered under a “zero tolerance” program that will see police conduct home inspections without notice.

Landlords in the Long Island community of Westbury will be targeted by a newly created police “Housing Enforcement Unit” that will “modify search warrant law to eliminate prior notice, aggressively use warrants and housing sweeps on a regular basis.”

Residents are being encouraged to report their neighbors to authorities if they suspect they are housing tenants who have not been registered with the government. Local station News 12 also gave out an email address and phone number encouraging viewers to, “report a suspected illegal rental.”

Maintenance rules and violation fines will also be raised under the new program.

Mayor Peter Cavallaro told News 12 that permitting property owners to call the shots on rentals “victimizes the community as a whole.”

Although the crackdown was launched after complaints by residents, its primary purpose appears to be a way to target landlords and homeowners who rent out rooms in order to help pay the cost of exorbitant property taxes.

Respondents to the News 12 report decried the move as a selfish attempt to prop up house prices at the expense of property rights and personal freedom.

“TAXES for your bloated New York nanny state politicians is what this is all about, they don’t give a damn about the people,” stated one YouTube user.

“Boo hoo hoo, my property value is declining. I know, let’s call the state goon squad to destroy the lives of people that may harm the value of our homes. This ‘community’ action will backfire, causing property values to drop to zero in a zero tolerance ‘community,’” added another.

“Yes! Report an illegal rental ASAP. The American people have raised their voices loud and clear. They’re saying, “State supremacy forever!”, and “Police supremacy over all!” joked another respondent.