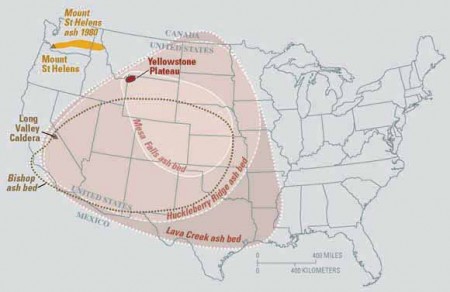 On Sunday, the worst earthquake in about 30 years rattled the Yellowstone supervolcano.  Overall, there have been at least 25 significant earthquakes at Yellowstone National Park since Thursday, but it is the 4.8 earthquake that has many observers extremely worried.  Could such a large earthquake be a sign that the Yellowstone supervolcano is starting to roar to life after all this time?  And if it does erupt, what would that mean for the rest of the country?  As you will see below, a full-blown eruption at Yellowstone would be absolutely catastrophic.  It is estimated that such an eruption could dump a 10 foot deep layer of volcanic ash up to 1,000 miles away and render much of the nation uninhabitable for years to come.  In essence, it would instantly bring the United States to its knees.

It is true that it is normal for Yellowstone to experience up to 3,000 earthquakes a year.  But most of those earthquakes are extremely small and nothing to worry about.

But the 4.8 earthquake that struck on Sunday is definitely raising eyebrows – especially considering what else has been going on at Yellowstone lately.

For example, the scientists that monitor Yellowstone are telling us that the area where the earthquake was centered has been experiencing “ground uplift” in recent months…

A University of Utah release said that the quake area had experienced a “ground uplift” since August and that “seismicity in the general region of the uplift has been elevated for several months.”

I don’t know about you, but the fact that the largest volcano in the U.S. by far has been experiencing “ground uplift” is not very comforting to me.

And there have been reports of strange animal behavior around Yellowstone as well.  For example, the following YouTube video of numerous bison literally running away from Yellowstone has gone viral…

That video was captured during the month of March well before the 4.8 earthquake happened.

Could it be possible that those bison sensed that something was coming?

The danger posed by Yellowstone should not be underestimated.

This is something that I have written about before, but since then scientists have discovered that the Yellowstone supervolcano is actually two and a half times larger than they previously believed it to be…

Late last year a new study into the enormous super volcano found the underground magma chamber to be 2.5 times larger than previously thought — a cavern spanning some 90km by 30km and capable of holding 300 billion cubic kilometres of molten rock.

If the sleeping giant were to wake, the outflow of lava, ash and smoke would devastate the United States and affect the entire world.

A full-blown eruption at Yellowstone would be unlike anything that any of us have ever seen before.  The following YouTube video attempts to portray what would happen to areas within a few hundred miles of Yellowstone…

But of course the devastation would not just be limited to the northwest part of the country.  The following are some more facts about Yellowstone that I compiled for a previous article…

In essence, a Yellowstone eruption would be on the same level as a Carrington event.  Either one would fundamentally change life in the United States in a single day.

Personally, I certainly hope that we do not see an eruption at Yellowstone any time soon.  And actually, I am much more concerned about the possibility of an eruption at other volcanoes in the northwest such as Mt. Hood and Mt. Rainier.

But if the ground keeps rising rapidly at Yellowstone and earthquakes like the one that struck on Sunday keep on happening, then it would be very foolish for us to ignore the warning signs.

And of course you shouldn’t expect the government to warn you about the potential threat of a Yellowstone eruption until the very last moment.  Generally speaking, the government is much more concerned about “keeping people calm” than it is about telling us the truth.

We seem to have moved into a time of increased seismic activity all over North and South America.  In such an environment, it would not be wise to say that an eruption at Yellowstone “can’t happen”.

The truth is that an eruption at Yellowstone could happen at any moment.  Let us just hope that we are all out of the way when it does.