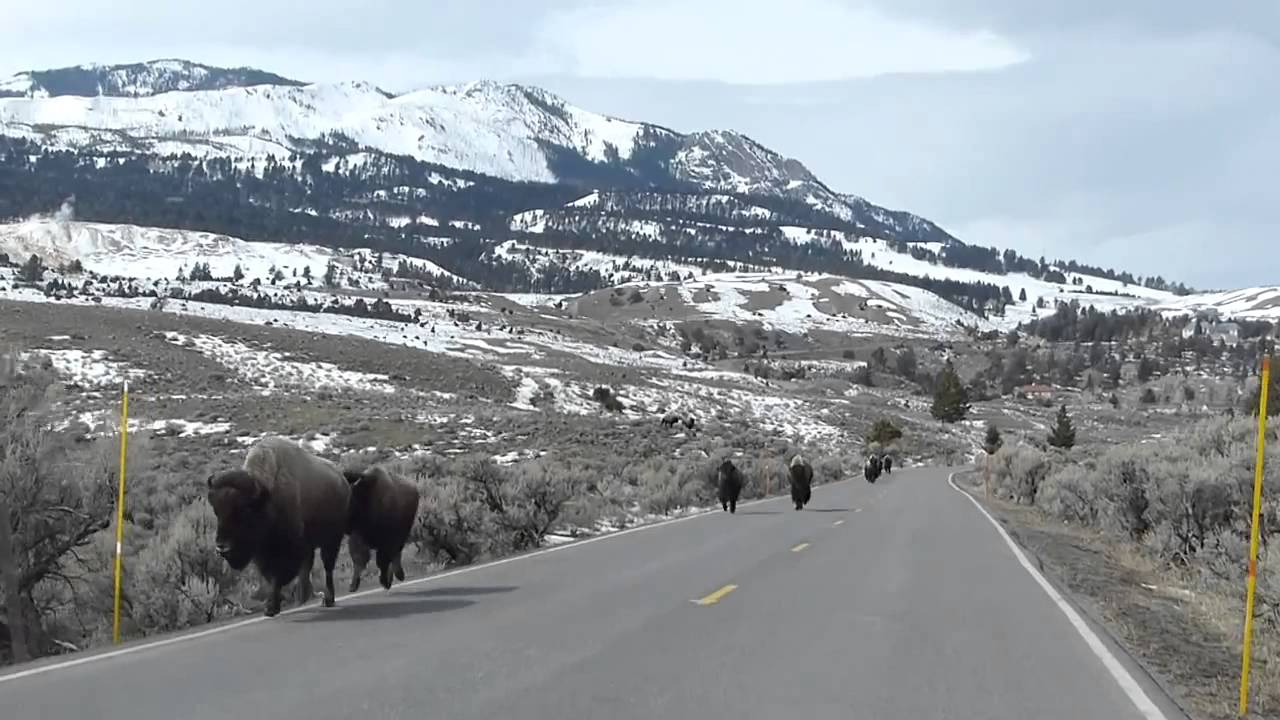 These stories are obviously being written by those who haven’t done much research. I have been guilty of that myself, so I mean no offense. Sometimes we rush to write a story before we have looked at all the pertinent facts.

Bison, not excluding Yellowstone Bison, are migratory creatures. They move to where the food is and away from the elements. What we have just witnessed is, more than likely, a delayed migration due to a particularly long and harsh winter. Their migration normally occurs in late February, but due to the Winter of 2014 being so harsh it would be understandable if that movement was a few weeks later than usual. The below video happened before the 4.8 earthquake at the park and very few of these reports are acknowledging that fact.

The ironic thing is that the Bison really are running for their lives, or more accurately to their deaths, but it is not what you think.

There is an overpopulation of Bison at Yellowstone and it has caused officials to consider the slaughter of hundreds of these beautiful creatures. Their erratic migration patterns were in the news long before the recent Yellowstone quake. It was just buried on the back page.

Why? Because they have been showing signs of leaving the park for some time, in search of food, and this did not start in 2014.

Yellowstone National Park managers are considering a plan that would ship hundreds of bison to slaughter if large numbers of the nation’s last purebred herd migrate out of parkland and into Montana state lands in search of food.

Yellowstone spokesman Al Nash said the park was preparing to capture any animals that cross into Montana, where they are not tolerated. An estimated 4,600 bison now roam the park, far exceeding the target population of 3,000 to 3,500, he said.

Yellowstone biologists have determined that between 600 and 800 bison, also called buffalo, must be culled each year over the next several years to reduce the herd, Nash said.

“In order for us to approach that population target, we’re going to seek opportunities to capture any animals that move outside the park’s boundaries,” he said, adding that just over 100 bison have been removed so far this year through hunts in Montana.

The plan to cull wayward bison is refueling a decades-long debate over management of animals that wander during harsh winters from Yellowstone’s snow-covered high country to seek forage in lower elevations in Montana.

NPS.gov (National Park Service) gives a synopsis of the the migratory patterns of the Yellowstone Bison:

Yes, bison are migratory animals. When and where they migrate depends on a complex relationship between abundance of bison, quality and quantity of summer forage, and winter snowpack. In the Yellowstone area, they move from their summer ranges to lower winter ranges as snow accumulates and dense snowpack develops. The central herd moves both west and north toward park boundaries in winter, and may remain along the west boundary well into birthing season. The northern herd migrates within the park most winters, but will move beyond the north boundary in severe winters.

The claim that Bison are running for their lives may be true because those that are caught may end up between two slices of bread and smothered with cheese.

Please understand that I am not discounting the dangerous possibility of a Yellowstone volcanic eruption. I have been watching the news and researching intently ever since we learned of last weekend’s quake which was the most sizeable in decades.

But the Bison have more important things to worry about than volcanoes. They are trying to avoid being lunch, whether they know it or not.

Update: I have been talking to some people via social media that are residents of Montana. The word I am getting is that many of these animals are diseased and it is probably not in the plans to process the meat for human consumption. Hopefully they can find a way to turn this situation into a positive but as for now it appears that the animals may be killed only for population control measures.