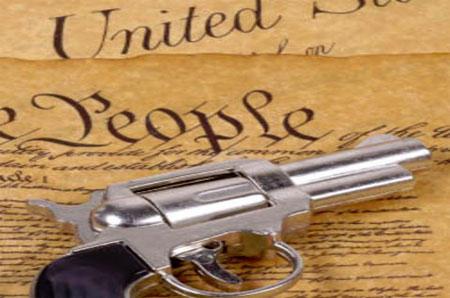 On May 1, 2013, Jordan Klaffer was shooting his gun at targets on his family’s private property in Missouri, as he frequently does.

That particular day, he was interrupted by Officer Jerry Bledsoe, who said he was responding to a noise complaint. Bledsoe gave Klaffer an ultimatum: Give me your guns, or you’ll be arrested for disturbing the peace.

Klaffer recorded the conversation and posted it on YouTube. Here’s the footage:

Klaffer refused to surrender his guns and was promptly arrested for “disturbing the peace”.

To express his opinion that Bledsoe harassed him for exercising his Second Amendment rights, Klaffer decided to exercise his First Amendment rights to bring attention to the incident.

He posted recordings of his confrontation with Bledsoe on YouTube and Facebook, and posted side-by-side photos of Bledsoe and Saddam Hussein on Instagram with the caption “Striking Resemblance.”

Bledsoe didn’t like any of that one bit, so he obtained a court order that required Klaffer to remove all videos, photos, and text referencing Bledsoe from the internet and to prevent him from posting such material in the future.

In fact, Bledsoe claimed that Klaffer was STALKING and HARASSING him in order to obtain the ex parte protection order. The order stated that Klaffer “not abuse, threaten to abuse, stalk, molest, or disturb the peace of Petitioner.”

On February 25, 2014, the ACLU of Missouri filed a suit against Bledsoe on behalf of Klaffer. The organization’s press release explains why they took on this case:

A government order prohibiting criticism of government is the worst kind of censorship,” explains Tony Rothert, legal director of the ACLU of Missouri.

“Gun advocates who fear the government is infringing on the Second Amendment have every right to broadcast their beliefs,” says Jeffrey A. Mittman, the ACLU of Missouri’s executive director. “The ACLU will always push back against government censorship.”

Here is an excerpt of that complaint, which can be read in its entirety here:

Eugene Volokh is a law professor at UCLA who writes for The Washington Post. In an article about this case, he explains how the court’s order violated the First Amendment:

Such an order violates the First Amendment even if it referred to a private person, I think, and certainly when it bars the posting of the name of a police officer whom one is criticizing, and a video of the officer performing his duties. I’ve written in detail about such orders, and why they are unconstitutional, in my One-to-One Speech vs. One-to-Many Speech, Criminal Harassment Laws, and “Cyberstalking”; the article chronicles how harassment and stalking laws — which were designed to stop (among other things) unwanted speech to a person — are now being used to stop unwanted speech about a person. Yet so long as the speech about a person doesn’t consist of true threats or other unprotected forms of speech, it must remain constitutionally protected.

It will be interesting to hear about the outcome of the suit. The First and Second Amendment rights of Americans have been subject to increasing infringement, and it is refreshing to see citizens fighting back.