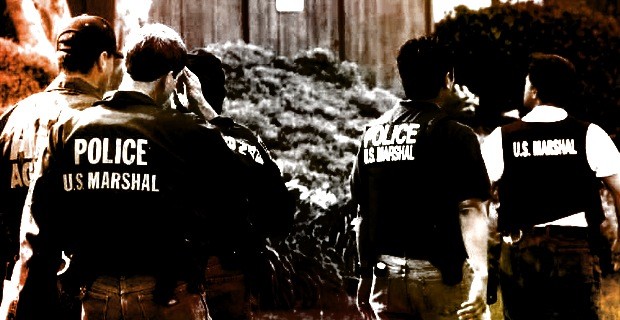 If you live in Albuquerque, it might be time to consider a move, because it sure seems like law enforcement there is hunting the citizenry.

The most recent law-enforcement-related shooting happened on Tuesday, when U.S. Marshals fired at a wanted man and shot him in the head.

That man, Gilberto Angelo Serrano, was pursued by a U.S. Marshals Service task force to be arrested for violating parole and other alleged crimes, including aggravated battery with a deadly weapon, child abuse and being a felon in possession of a firearm, reports ABQJournal.com.

Here’s how bystanders described the scene:

Witnesses said they saw a row of unmarked SUVs pull into the parking lot of a strip mall after 9 a.m. and drive up to a green pickup truck.

They said they saw a woman armed with a gun in civilian clothing fire one shot through windshield from outside the truck, followed by at least two other gunshots from men who stepped out of the SUVs.

All of the witnesses, including Mathew Garcia, a man who was stopped at a Sunset Drive stoplight, said the shooters did not identify themselves as law enforcement, nor could they see badges or identifying vests.

Gabriel and Barbara Valdez were waiting at a nearby methadone clinic when they saw the shooting. They said the man shot was struck at least once in the head, that he wasn’t armed, that none of the shooters identified themselves, and that an ambulance arrived about 10 minutes later. (source)

Officials have not said if Serrano was armed, but witnesses say he was not, and that there was no obvious reason for the U.S. Marshals to shoot him:

Citizens who witnessed the incident confronted the Marshals and questioned the shooting. The following is a video taken by a witness.

Valdez said the Marshals confiscated his cell phone camera as well as his mother’s camera as “evidence,” even though he did not even start recording until after the shooting.

He told KRQE that the Marshal who fired at Serrano yelled to him and then suddenly shot the man:

Here is an interview of his account of the incident:

It sounds like Serrano was not exactly an upstanding citizen, but does that mean law enforcement now gets to act as judge and jury (and sometimes, executioner)?

Bernalillo County Sheriff’s Office is leading a multi-agency investigation into the shooting.