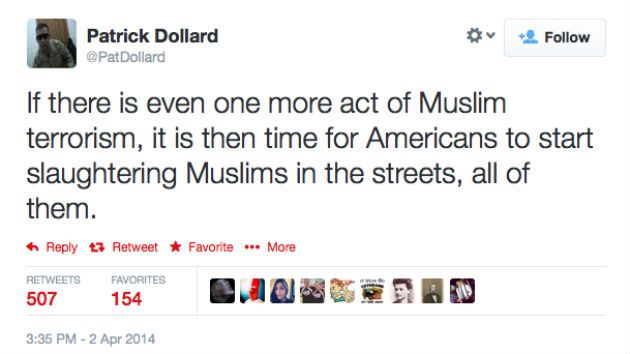 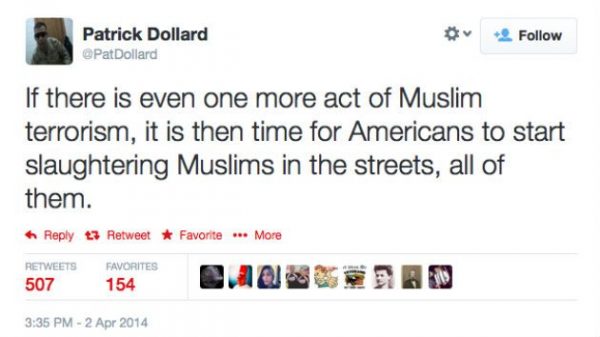 On Wednesday, Ft. Hood military base in Killeen, TX was once again the site of a mass shooting. Four people were killed, including the gunman Ivan Lopez, and 14 were injured. Just one day earlier on April 1st, an ex-Army recruit’s online jihadist threats became public, as the man identified as “Booker“ promised to commit a “Fort Hood-inspired” act of terror. This is not a coincidence, as terrorism is synonymous with Islam. Though no one wants to say it out loud for fear of offending. Enter Pat Dollard, a conservative filmmaker and Breitbart contributor, who has also written about the Muslim Brotherhood, who became a side story right as the shooting took place. Pat Dollard got it right in his tweet. The reaction to this tweet and the firestorm it caused on Twitter, and in other online publications show that Americans are not going to accept the truth about Islam. For this reason, America will lose the war against an enemy that has already come and conquered.

@Chandlej @jimmiebjr BZZZT! Not even close. The lefties don't even come close in the "Calling For The Deaths Of Others" sweepstakes.

Everyone please tell this racist bastard what you think of him calling for a slaughter of Muslims. Thanks. https://t.co/bKwYJKlMIz

Twitchy unleashed a firestorm on Pat Dollard as well, calling his tweet ‘Not just insane, but flat-out evil.’ Was it evil? Calling the religion of hate and jihad out for its atrocities is not evil, but it touched a raw nerve that no one wants to expose. Conservatives went ballistic, as did liberals. Pat Dollard is not going to be out on the street murdering Muslims. But America is under siege by Islam, from the inside out. Calling out Pat Dollard’s tweet as racially insenstive and ignorant is more politically correct propaganda. For it is  Islam that urges the “killing of the infidels.”

While America twiddles it’s collective thumbs, Islamists are viciously murdering Christians in Syria, in actual slaughterhouses. CAIR-Hamas is trying to block a movie about honor killings because it was “produced by Jews,” or so they say. In 2012, CNN reported that “8,500 Islamic terrorist attacks killed nearly 15,500 people,” which was a “69% rise in attacks and an 89% jump in fatalities from 2011.” This coming from CNN, one of the most liberal networks on television. It is time to call a a spade a spade. Pat Dollard is right, and the majority of Americans are 100 percent wrong. America is at war, but the enemy will steadfastly not be named.

So right now, the world is collectively rejoicing that the latest Ft. Hood shooting is deemed “not terrorism,” and that the shooter was an Iraq war veteran, who was mentally ill. This doesn’t change the truth about Islam, nor has terrorism been officially “ruled out.” Regardless, the truth about Islam is too great to ignore. Americans cannot handle the truth about a religion that is anything but peaceful. Pat Dollard exposed this Achilles heel with his tweet. He had the guts and fortitude to speak up, disregarding the collective backlash of Conservatives and liberals alike.

Islamists took down the World Trade Center on 9/11, and Pat Dollard’s reaction to Wednesday’s shooting was one of disgust with the death cult that is Islam. His tweet almost caused as much of an uproar as the tragic shooting itself, which further shows Americans simply will not acknowledge Islam’s horrific truth. There is no peace, no coexistence, and they are coming for each and every “infidel.” Slaughter is the Islamic agenda.