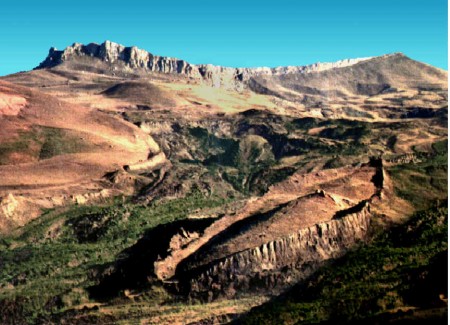 The new Hollywood blockbuster “Noah” has created a tremendous amount of interest in the story of Noah’s Ark.  Traditionally, most people have regarded it as just a cute Bible story to tell children.  But could it be real?  Is there solid evidence that Noah’s Ark actually existed?  If there is real evidence, would you believe it?  What you are about to see is absolutely stunning.  In fact, some of the things that you are about to see are so shocking that many people will simply refuse to accept them.  Later in this article, you are going to see video footage of the physical remains of Noah’s Ark.  This discovery has been known about for quite some time, but the mainstream media has mostly ignored it.  A boat-shaped object that is the exact length that the Ark should be and the exact width the Ark should be has been found on the mountains of Ararat.  Ground penetrating radar shows us how the Ark was laid out, and scientific tests have been conducted on wood and metal extracted from the gigantic buried boat.  If you have never heard about any of this before, prepare to be blown away.  The following are 14 cold, hard facts about Noah’s Ark that you probably do not know…

#1 The Ark was about 500 feet long.  That would make it approximately the size of a World War II aircraft carrier.

#2 It has been estimated that the Ark had an internal volume of more than 1.5 million cubic feet.

#3 According to brand new research conducted by scientists the University of Leicester, Noah’s Ark could have carried at least 70,000 animals without sinking…

Noah’s Ark would have floated even with two of every animal in the world packed inside, scientists have calculated.

Although researchers are unsure if all the creatures could have squeezed into the huge boat, they are confident it would have handled the weight of 70,000 creatures without sinking.

#4 Of course the Ark would not have needed to hold 70,000 animals.  One conservative estimate puts the number of animals on the Ark at about 16,000.  This would have allowed for more than enough room for food, supplies and lots of empty space.

#5 We have discovered at least 250 different ancient cultures that have a story of a massive, cataclysmic flood.  Most of those stories have striking similarities to the Genesis account.

#6 If there really was a global flood, we would expect to find billions of dead things laid down in rock layers all over the globe.  And that is precisely what we find.

#7 We know where Noah’s Ark is today.  Yes, you read that correctly.  As you can see from the YouTube video posted below, the remains of Noah’s Ark have been discovered on “the mountains of Ararat” in Turkey.  This video footage is absolutely stunning…

#8 The remains of the Ark are just as long and just as wide as the Bible says they should be.

#9 Wood from the Ark has been tested, and the tests show that it does contain organic carbon.  That means that the fossilized wood that was discovered was once living matter.

#10 Along with wood, metal was also used in the construction of the Ark.  Iron fittings and aluminum have both been discovered at the remains of the Ark.

#11 Petrified animal dung, a petrified antler and and an ancient piece of cat hair have also been retrieved from the remains of the Ark.

#12 Historical records confirm that people have believed that this is the correct resting place of the Ark for a very, very long time…

The Gilgamesh Epic (650 BC) gives Mt. Nisir as the landing place of the Ark. The local name for the town where the Ark was found is Nasar.

The annals of Ashurnasurpal II of Assyria (833-859 BC) places it south of the Zab river (correct).

Theophilus of Antioch (115-185 AD) said the Ark could be seen in his day in the Arabian mountains. Later Church Fathers also mention the Ark as late as the mid 7th century.

In the 13th century, Willam, a traveler, stated for the first time that Mt. Masis was the Ark location (present-day Mt. Ararat).

Ptolemy’s Geographia (1548) mentions the mountains of Armenia as the place of landing. So does the traveler Nicolas de Nicolay (1558).

#14 The site is now known as “the National Park of Noah’s Ark” and it has previously been officially recognized by the Turkish government.

If you are interested in learning more, you can find additional videos about this incredible discovery here and here.

When I was young, I desperately hoped that Noah’s Ark would be found someday, but I doubted that it would ever happen.

Well, it has happened.

We have found Noah’s Ark.

It is not just a story for little children.

So will you believe the evidence, or will you just dismiss it because it does not fit with your current worldview?