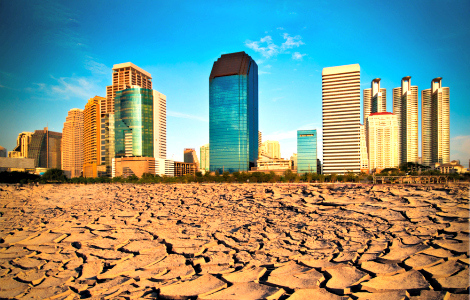 Let’s assume for a moment that in the unlikely event that the Ukrainian  crisis is mitigated without escalating into World War III, we have another dire set of circumstances which have been created that will force the world into conflict.

Let’s further assume for another moment that in the highly unlikely event that the sheep are awakened in this country and America is able to be restored to a previous era of prosperity and relative self-determination, water will be used to enslave the United States. In other words the globalist banksters will keep coming after us until they get what they desire.

A Two Pronged Approach to Enslaving the US

As one examines the trend curve with regard to water, it is apparent that water scarcity will be utilized to manipulate the American people into total bondage under the globalists who have created the shortages in the first place.

In phase two, nation will be pitted against nation in a desperate attempt to promote war between nations as a means of achieving planetary unification. Very soon, America will be forced into water wars in order to secure the precious asset of water for the people. This will force our people into more wars of occupation in a search for water. Meanwhile, every nation that America conquers, is one less country that the bankers have to worry about taking over.

This article will focus exclusively on the banksters efforts to enslave the United States through the manipulation and control of water. Part two will cover how water will be used to create wars of unification on the way to the establishment of the New World Order. As any aware person knows, Agenda 21 is being used as a front for the purpose of increasing the bottom of line of select global corporations.

Global consumption of water is doubling every 20 years, more than twice the rate of human population growth. Also, according to the United Nations, more than one billion people already lack access to fresh drinking water. If the current trend continues, by 2025 the demand for fresh water is expected to rise by over 50% more than the amount of water that is currently available.

In no way, is the United States immune to this dire set of circumstances. By 2030, 47% of the world’s population will be living in areas of high water stress, according to the Organization for Economic Co-operation and Development’s Environmental Outlook to 2030 report. Subsequently, analysts worry that wars of the future will be fought over blue gold, as thirsty people, power-hungry politicians and greedy corporations battle for dwindling resources.

Governments and military planners around the world are aware of the impending problem; with the US senate issuing reports with names like Avoiding Water Wars: Water Scarcity and Central Asia’s growing Importance for Stability in Afghanistan and Pakistan. With rapid population growth, and increased industrial demand, water withdrawls have tripled over the last 50 years, according to the UN.

Red Alert: Water Withdrawals Are Taking Place In the US Right Now

If one controls the water of a nation, they control the nation. In the backdrop of the global water crisis, this is exactly what is happening in the United States through the withdrawal of water.

Water withdrawals are taking place in two distinct phases inside of the United States. First, the infamous corporate raider and robber baron of the oil industry, T. Boone Pickens, is leading the charge to unscrupulously enrich himself as he leads the globalist depopulation efforts to create a series of artificially contrived water shortages. Pickens was one of the first to rush to capitalize on the impending water shortage by his insidious acquisition of the largest underground aquifer in the US, the Ogallala Aquifer, containing a quadrillion gallons of water. This massive underground reservoir extends from Texas to South Dakota. In order to acquire the water and expand his control over the Ogllala Aquifer, Pickens needed more political power. In 2006, Pickens bought off the Texas State Legislature for $1.2 billion. This purchase of water-related law making power has allowed Pickens the ability to accomplish four goals: (1) He created an eight-acre town and an accompanying local government, and subsequently made his tiny municipality into a powerful Water Supply District; (2) As such, Pickens automatically acquired the right to issue tax-free bonds and thereby, giving himself the lucrative benefit of borrowing at a tremendous discount; (3) Now operating as a public entity, Pickens is armed with the power of eminent domain which will allow him to expand his water acquisition potential in which he bullies local residents, along the aquifer, to sell their properties for pennies on the dollar; (4) Pickens used his 1.2 billion dollar bribe money to get the Texas legislature to pay for a 250 foot wide water pipeline corridor all the way to Dallas where Pickens will make an estimated yearly profit of $165 million at taxpayer expense. According to Business Week, Pickens is now the number one owner of water in the United States. He will soon possess the ability to create a waterless wasteland through the heartland of America and who is going to stop him, Obama or the corrupt Texas State Legislature? Pickens isn’t content with his new found power over Texas water supplies. Pickens is in the process of greatly expanding his control over water as he petitioned congress and the Senate Energy and Natural Resources Committee to expand his private/public water district’s power of eminent domain and right-of-way, so that he can operate across state lines as well. As this is fully granted, Pickens will control all water between Texas and South Dakota. Pickens is also in the process of doubling down as he has added his previous wind projects to the water district by proposing a vast $12-billion wind farm, to sit on the same land he is acquiring for his water pipeline. The cost of the water pipeline is estimated at $1.5 billion, which is being financed at taxpayers’ expense through bonds and low interest loans.

Pickens has become the poster child for the phrase “crony capitalism,” and crony capitalism is the least of our worries. The net effect of the Pickens venture is that he will soon control a vast portion of the nation’s water. Pickens plays for the bad guys (i.e. the globalist banksters) and he is being allowed to enrich himself as he furthers the cause of the Agenda 21 takeover of the United States’ most precious resource, water. There is a second front which is being used to create an artificial water shortage in the United States. Perrier, a subsidiary of the multi-national Nestle corporation, has invested heavily in Michigan and the Great Lakes. Locked behind two sets of chain link fence, huge siphoning pumps are deliberately hidden from view in the forest. They are pumping the Great Lakes dry and shipping the water overseas. Much of the Great Lakes water is headed for China, filled in massive cargo bags which are pulled across the ocean by a large supertanker.

By using a gaping loophole in the 2006 Great Lakes Compact, Obama’s appointees are allowing the Nestle Company to export precious fresh water out of Lake Michigan to the tune of an estimated $500,000 to $1.8 million per day profit. Obama’s Federal water managers are allowing the theft and subsequent export of our Great Lakes water out of our country across thousands of miles of oceans into the Asian basin plagued by huge population centers that are suffering from their constant lack of fresh water. Can there be any doubt that Obama truly hates America?

Using Water to Facilitate the Grip of Agenda 21

This opens the door to the wholesale rollout of Agenda 21. By controlling water, the globalists can determine who lives where and under what conditions if they are allowed to control the water. Secondly, populations could be “nudged” into the stack and pack cities that Agenda 21 calls for in which there will be 11 megacities each consisting of six million each. That totals only 66 million Americans. Where are the other 245 million Americans in this plan?

Using Water To Depopulate the USA

A Defense Intelligence Agency report prominently mentions that agriculture uses 70% of the world’s water supply. Therefore, it follows that water shortages will quickly lead to food shortages. And what do the globalists see as the solution to the resulting food crisis which will follow on the heels of the contrived water shortages? The globalists are using this opportunity to promote drought resistant GMO crops. That is right, they are promoting GMO’s on the heels of artificially contrived water shortages!  So, if you don’t die of thirst or break the family budget by attempting to obtain water, you will increasingly find yourself being poisoned by toxic, drought resistant GMO’s. These are the same GMO’s, when examined in French longitudinal studies that demonstrated that lab rats who consumed GMO’s developed fatal tumors and died. Again, the brilliance of this plan is stunning in which an artificial water shortage is created and the public will clamor for GMO drought resistant crops.

This represents a distinct depopulation agenda.

The United States is also being pulled into this unhealthy paradigm of an artificially contrived water shortage, through outright theft, government assisted privatization and subsequent hording. Because of increased privatization of our water supplies, American municipalities are/will experience massive rate increases which are common in the third world.

The next part of this series will be to expose how this plot will be used to start wars around the globe. If the globalists cannot start World War III over Ukraine, they will certainly do so over water in the next decade.