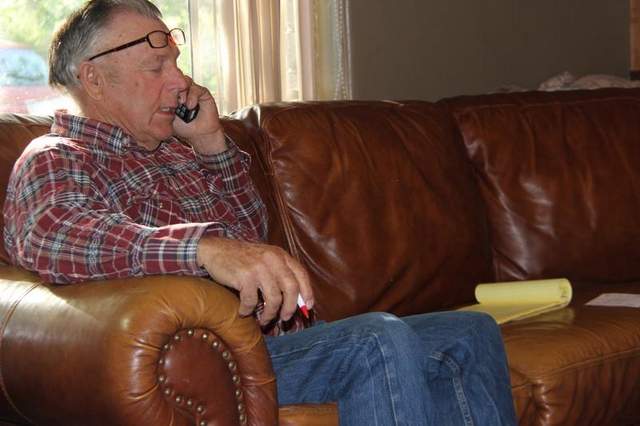 A Ruby Ridge-style standoff is brewing in Nevada, where dozens of armed federal agents are closing in on cattle rancher Cliven Bundy over claims that Bundy has allowed his cows to graze illegally on government land, endangering a protected species of tortoise.

Vowing to take a stand for, “your liberty and freedom,” Bundy says he is prepared to be killed as authorities surround a 600,000 acre section of public land as a result of Bundy violating a 1993 Bureau of Land Management ruling which changed grazing rights in order to protect the endangered desert tortoise.

Bundy’s refusal to recognize federal authority over the land under dispute and his failure to pay tens of thousands of dollars in grazing fees stems from his assertion that his family’s history trumps bureaucracy.

“My forefathers have been up and down the Virgin Valley ever since 1877. All these rights I claim have been created through pre-emptive rights and beneficial use of the forage and water. I have been here longer. My rights are before the BLM even existed,” Bundy said.

Accusing feds of seizing Nevada’s sovereignty, Bundy says he has fought the battle legally, through the media, and is now gearing up to fight it physically.

“Armed agents are forming a a military-like staging area to prevent anyone from approaching the area,” writes Mike Paczesny.

Bundy asserts that his case is emblematic of how America has been transformed into a “police state,” labeling the government’s actions “pathetic”.

Hundreds of federal officials, aided by helicopters, low flying aircraft and hired cowboys, began rounding up Bundy’s cattle on Saturday as Bundy accused them of “trespassing,” adding that the impact will only serve to raise beef prices for residents of Las Vegas 80 miles away.

Feds postponed a similar raid in 2012 over fears the action would spur violence. Bundy has drawn a lot of support from the local community and protesters are heading to the area to demand authorities back off. Officials have created a taped off “First Amendment Area” where demonstrators can voice their concerns. A sign placed inside the area reads “Welcome to Amerika – Wake Up” alongside a hammer and sickle logo.

“The rights were created for us,” Bundy told the Las Vegas Review Journal. “I have the right to use the forage. I have water rights. I have access rights. I have range improvement rights, and I claim all the other rights that the citizens of Nevada have, whether it’s to camp, to fish or to go off road.”

Addressing the justification of seizing the cattle to protect a species of tortoise, Bundy stated, “I’ll never get it. If it weren’t for our cattle, there’d be more brush fires out here. The tortoises eat the cow manure, too. It’s filled with protein.”

The standoff has echoes of the 1992 Ruby Ridge incident, during which Randy Weaver, accused of selling an ATF agent two illegal sawed-off shotguns, became embroiled in a tragic confrontation with the the United States Marshals Service (USMS) and the FBI, resulting in the death of Weaver’s son Sammy, his wife Vicki, and Deputy U.S. Marshal William Francis Degan.

The story also brings back memories of New Hampshire couple Ed and Elaine Brown, who were involved in a nine month standoff with armed law enforcement and feds as a result of their refusal to pay income tax. The Browns were later convicted of “plotting to kill federal agents” because of their refusal to surrender and were both given de facto life sentences.

In a series of YouTube videos, Cliven Bundy and his wife outline the background behind their decision to take a stand against the feds, arguing that their fight is a constitutionally-driven line in the sand to push back against the usurpation of big government.