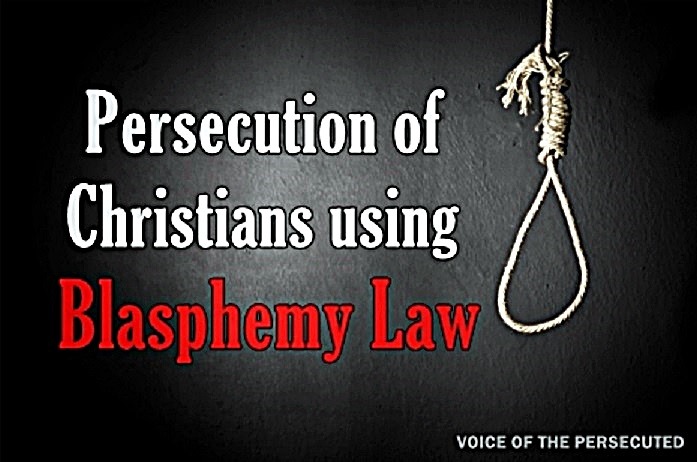 The purported religion of peace and tolerance has once again displayed its zest but this time in Pakistan. According to a news report by The Blaze, a Christian couple in Pakistan has been given the death sentence for allegedly sending a local Imam a text blaspheming the prophet Mohammed. It is unlikely the couple will be executed, according to the BBC, since Pakistan has a de facto moratorium on the death penalty. However, it does not change the fact that, in Pakistan, sharia law exists as evidenced by the blasphemy laws subjected citizens to cruel punishment for insulting the Muslim prophet Mohammed.

The accused couple, Shafqat Emmanuel and Shagufta Kausar, has denied the charges and their lawyer, Nadeem Hassan, believes the trial was conducted unfairly.

Imagine that – an unfair trial in a country that has instituted some sharia laws.

In the report by Sharona Schwartz for The Blaze:

The Imam, Maulvi Mohammed Hussain, of the local mosque in Gojra – a town with a history of violence against Christians – filed the complaint against them last July, accusing them of sending him the text message which he characterized as insulting to the Prophet Mohammed.

According to AFP, the imam said the husband sent the message from his wife’s cell phone. However, the couple’s lawyer said the message was sent from a phone his clients had lost before July.

“The defense lawyer said that the couple had suspected rivals of implicating them into blasphemy case to settle personal scores and that they had ties with the complainant,” AFP wrote.

The BBC reported that critics have argued the blasphemy laws in Pakistan are misused in order to settle personal vendettas and unfairly target members of minority groups.

Shafqat Emmanuel and Shagufta Kausar are in their forties, have three children and are among the impoverished according to their lawyer.

This is just another incident in Pakistan where “tolerance” is shown through the imparting of sharia law. In December, an elderly Pakistani doctor was arrested and accused of blasphemy; his crime was “‘posing as a Muslim’ after reportedly being secretly recorded reading a verse from the Koran.” The man is 72 years old and a member of the Ahmadi faith,” a minority Muslim group often persecuted by the mainstream Muslim community.

Gojra is the same town where a Christian neighborhood was attacked in 2009. The mob burned 77 houses, killing seven people after rumors circulated that a desecration of the Koran had taken place.

While this incident occurred in Pakistan and many may wonder why it should concern Americans, it is an indication of how Islamic sharia law operates. In America, there is still freedom of religion, speech and press. Americans see almost on a daily basis many individuals blaspheme God. It is seen in desecration of religious monuments, speech or unflattering portrayal of Jesus described as “expression art.” We hear of the destruction of the Holy Bible by our own military operating in Muslim countries using the excuse of it being “offensive” should it be found by a non-Christian. However, in the United States, someone is not sentenced to death for any of these actions. It is recognized that individuals have the freedom to practice their religion or not practice a religion, as per their choice.

No one would be sentenced to death for refusing to be Christian or engaging in blasphemy against God. Those who blaspheme against God are punished, but not by a civil government court system. In Islam, those who do not “convert” to Islam can be killed, enslaved or “taxed” and those who blaspheme are killed as part of their sharia “law.” Yes, there are numerous “free will” choices in Islam. News reports are filled with the violence committed by Muslims against those individuals that have been deemed to violate some form of their sharia.

It’s interesting that the term “mainstream Muslim community” was used to describe the group who persecuted a minority sect. It would indicate that the majority of the Muslim community is what most individuals would term “radical” or “extreme.” The majority of Muslims would have you believe that only a small fraction of their religious sect is intolerant, harsh, unyielding and practice an extreme interpretation of Islam. In looking at the rate of Christian deaths in majority Muslim countries and the increased persecution of Christians in those same countries, one would have difficulty subscribing to the “small fraction” of Muslims practicing extremist rhetoric. It must be remembered that Muslims are allowed to “lie” or practice taqiyya in order to deceive those termed “infidels” until their numbers are large enough to overcome resistance. The phrase by a Turkish Imam declaring, “Islam is Islam,” should never be forgotten.

It is also further evidence that the professed “religion of peace and tolerance” is everything, but tolerant and peaceful as exhibited by habitual, continual, exacerbating violence against “non-believers” or those who violate sharia law. What is happening there can happen here if an inch is given or exception made in our justice system to accommodate one “special interest” group. Once that inch is given, how long would it take to get to that mile?