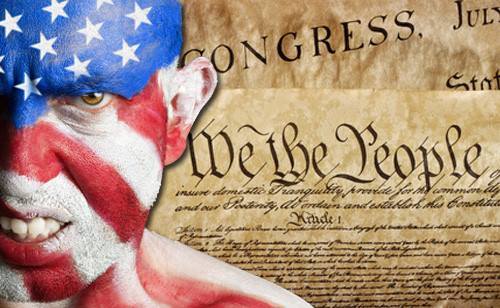 Pursuant to Article 5 of the US Constitution, if 34 states call for a convention, the convention is required to take place. Last week the state legislature of Michigan became the 34th state to demand a Constitutional Convention in the United States. There is no time requirement so a convention could be dragged out for years.  However, if a national convention does take place, then everything is on the table and the basic structure of our government could be changed forever. Subsequently, the Bill of Rights could be done away with in a formal manner.

Most will speak of the potential for such a convention to right the wrongs of the Obama administration. That is an unrealistic view. With a Constitutional Convention, America risks losing everything that separates us from us and China. If a convention does take place in 2016, it is clear to many of us that the seeds of civil disobedience, at the least, could come to the surface. At the most, the seeds of revolution could blossom into a bloody civil war. What would be the tipping point for such a confrontation in which a slumbering people awakens to reclaim its country?

Many of us are wondering what will be the tipping point when Americans, on a massive scale, begin to totally disregard and flagrantly disobey the authority of a government that does not respect the Constitution and American civil liberties. How far can the globalists push the American people before the American people will strike back? What will be the tipping point as we descend into WW III? Will it be an economic collapse? Will it be triggered by mass arrests under the NDAA? Will it be Obamacare?

I have concluded that the globalists who have hijacked our government are trying to provoke a revolution with the intention of crushing that revolution and the spirit of freedom forever. Further, let’s review the more egregious actions by the globalists and it becomes clear that not one of these transgressions against the people has produced the seeds of revolution. Let’s make no mistake about it, the globalists want you to rebel. There are running out of time before most of humanity will rise up. They need to crush freedom, now. Based upon that premise, I constructed a list of the various ways that the globalists are attacking humanity in order to bring the people to their collective knees as they attempt to carry out their expressed desire to “thin out the herd” and to enslave the survivors. As I constructed the list, which consisted of over 30 soft kill methods (e.g. Chemtrails, GMO’s, vaccines, fluoridated water, MSG, the QE Bailouts of 1, 2, 3, 4…, etc.), I came to the realization that globalists could continue to abuse the public in a number of ways and most of us won’t protest in the least.. Despite the fact that on the surface, it seems that our country has become a nation of sheep and appears to be willing to march headfirst toward our own planned demise. However, I am aware that Homeland Security has purchased 1.6 billion rounds of sniper ammunition. DHS is voting with their pocketbook that they strongly anticipate that America may soon be on the verge of standing up to the bankers who have taken over the government. Therefore, I took another long look at all the ways that we are under deadly attack.

Bringing the Average American To Their Knees

The dollar is hanging by a thread. If the dollar hyper-inflates, this will make the Great Depression unemployment numbers look like a walk in the park. We are on the verge of losing our retirements, 401K’s, Social Security, bank accounts and even our property rights.  If and when this happens, the breakdown of society will begin in earnest. Meanwhile, the elite will continue to grab as much of wealth as possible (i.e. MERS mortgage fraud, the Fed printing $40 billion dollars per month to buy real estate, the 2013, 7th Circuit Court of Appeals ruling, that banks can legally steal our deposits). And yet, we still have not stood up to the tyranny.

Groceries have recently risen by 30-40% and a food crisis looms. If and when a war in Ukraine actually breaks out, fuel prices will skyrocket. When the cost of shipping food exceeds the retail value of the food, the game is over. The grocery stores will be empty in a couple of days and the food riots will begin. However, a full scale revolution has not happened even though 25% of American children are going to bed hungry every night. The globalists have even employed a divide and conquer philosophy as a means to deal with social issues.

THE SEEDS OF REVOLUTION?

Yet, not one of these conflicts has resulted in anything approaching a revolution

Will any of this be the tipping point for revolution? No! America has tolerated these behaviors to this point, there is no reason to believe that we will rise up and take up arms against the government over these issues now. How will the powers-that-be provoke America into one final armed conflict in which the last vestiges America are destroyed forever?

The Constitutional Convention Will Be the Tipping Point

Make no mistake about it, the globalists are pushing the Constitution Convention, not the people.  In other words, America, any Constitutional Convention will be run by those who have destroyed this country’s economy and existing Constitution. As a result, nothing good can come out of this event.

Gun Confiscation Is the Ultimate Goal

In today’s America, we have lost every single one of the Bill of Rights under the NDAA and Executive Order 13603. As a result, 9 out of 10 rights, contained in the Bill of Rights, are gone. The only right remaining is the Second Amendment right to bear arms and it hanging by a thread.

You can shout it from the roof tops, there will be a Constitutional Convention and the Second Amendment will be repealed and all gun owners will be criminalized in one stroke of the pen.

High unemployment rates, skyrocketing food prices and water and food shortages, alone, might not be enough to trigger the next civil war. However, if the previously mentioned factors are combined with an all-out attack upon the Second Amendment, the globalists are going to get just what they want, a well-armed and angry America. When the Obamanistas come for the guns, there will be no hiding the intentions of the globalists. The veil will have been lifted. For those who don’t think this eventuality is true, then why did the NRA pick up 100,000 new members in one month last year? Why do gun shows have two hour wait lines just to get in? The tide is turning America and we are about to do what some feel should have happened after the murder of JFK. As noble as the last statement might sound, things are about to get very ugly. I am not a gun enthusiast. I do not belong to the NRA. However, I have reached my limit. My personal line in the sand with this criminal government, is the evisceration of the Second Amendment. I will not submit to registration. I will not submit to a voluntary surrender of my weapon for I know that gun confiscation and impending genocide run hand in hand as there were 17 genocides in the 20th century and each one was preceded with gun confiscation. Therefore, I will resist any attempt to remove the only protection that I possess. And now I believe that I will be in good company as witnessed by the recent behaviors of  my fellow countrymen. And I also know that globalists are aware of this as well and they may get their wish to draw and destroy the dissidents in one fell swoop. This Constitutional Convention idea was NOT the brainchild of the people. It is a part of the plan to strip away the last line of defense that the American people presently enjoy.

Now do you understand why DHS has armed to the teeth?