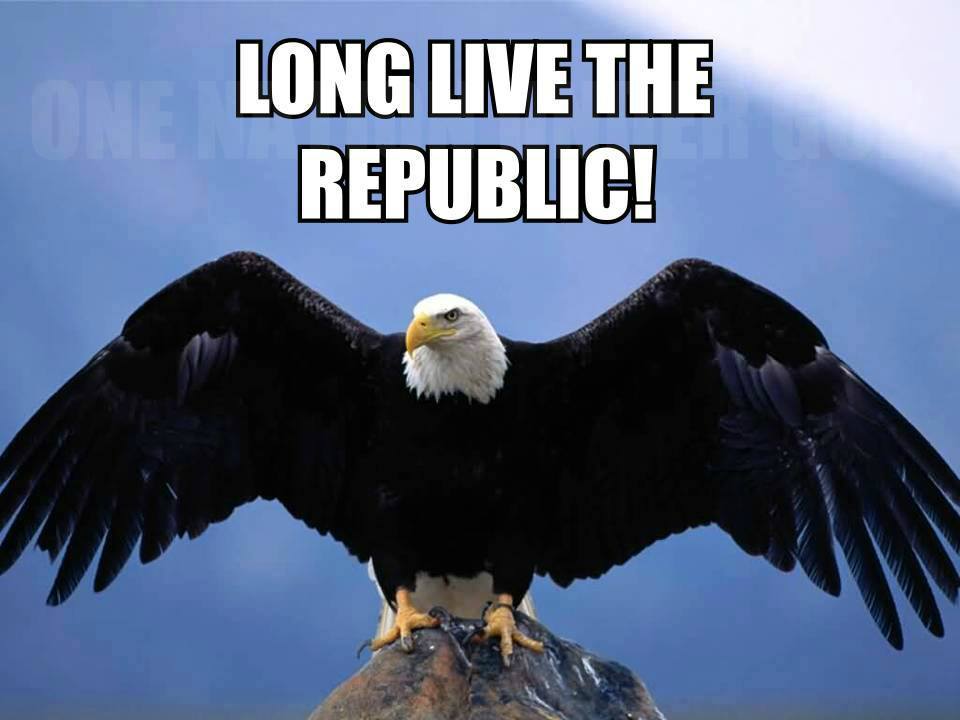 For over two hundred and thirty years the American Republic has weathered wars, epidemics, hostile neighbors, worldwide conflicts, economic disasters, internal struggles, and competing ideologies. Its birth was a long and desperate struggle for independence against the strongest and most advanced military in the world.

In the War of 1812 its capitol was burned to the ground. It suffered the growing pains of expansionism against hostile natives as well as unfriendly claims and competition by Spain, France, Great Britain, and Mexico. It suffered through a tragic and horribly bloody civil war that helped to define the idea of federalism at the expense of states rights and ended once and for all the national shame of slavery. It endured the rigors of industrialization and eventually emerged as the most technologically advanced nation the world had ever seen.

The Republic weathered the stock market collapse and a national drought that sent tens of millions into poverty and many thousands into starvation. And it emerged from its humble origins to proclaim ‘manifest destiny’ and smash the Spanish Empire, German imperialism, Japanese militarism, Italian fascism, the horrors of National Socialism, and eventually the corrupt ideology of Soviet communism. Its armies have faced the Chinese, the Mexicans, the Spanish, the Germans, the Italians, the Japanese, the North Koreans, the Vietnamese, and the petty tyrants of dozens of smaller countries and hot spots. Today it faces the international enemy of Islamic fascism and jihadist fundamentalism.

America has admittedly suffered imperfections and committed many mistakes and miscalculations along the way. For all nations, like people, suffer shortfalls. But through it all the United States has been a beacon of hope helping to point the way towards personal freedom and opportunity. It has freed more people from tyranny, been more generous monetarily, eliminated more evil, created more representative governments and hope, championed more human rights, and been a shining example of what can be right and true than any other nation or people has ever done in the history of the world. It has given women more freedom and opportunities than they ever had before. It ended the evil of slavery and championed the revolutionary ideals that all men are equal before God. This country has provided more opportunity, more hope, more peace, more wealth, and more freedom than any other has dared to contemplate.

America continues to struggle forward into a new century. It faces many challenges and hurdles and a host of enemies which increasingly attack and undermine it from within. Multiculturism and Political Correctness, massive legal and illegal immigration, cultural disintegration and decadence, globalism and statism, and the abandonment of traditional morality and the family structure are all controversies that it must face. Change is not always progress, and the foundational principles of the Republic should never be cast aside.

As the worlds only Superpower it must still face the evils that arise around the globe, weather the never-ending naysayers who attack its predominant position in Western Civilization, and deal with a resurgent Russia as well as a Red China that is really just beginning to flex its political, military, and economic muscle on the global stage.

The Republic faces many problems but we should still have faith in its people, history, ideals, and culture. It has overcome much in its two centuries plus of existence and it will have much to overcome in the next two centuries to come. It still remains that shining city on the hill and I thank God everyday that I live in this country and I am eternally proud to call myself an American.

The Republic may currently be in decline, but it is not dead. And if the Republic and its ideals fall, remember there is no where else to go and no one else to turn too. That alone makes it worth still worth fighting for and defending against all enemies, foreign and domestic.

David Huntwork is a conservative activist, blogger, and columnist and the proud father of three daughters. The son, grandson, and great-grandson of Ministers of the Gospel he brings a unique blended background of theology and ideology to the great debates of the day. He believes that Faith, Family, and Freedom is the formula for success and the key to a good life and a healthy nation. David blogs at TheConservativeCitizen.com. You can contact him at [email protected].