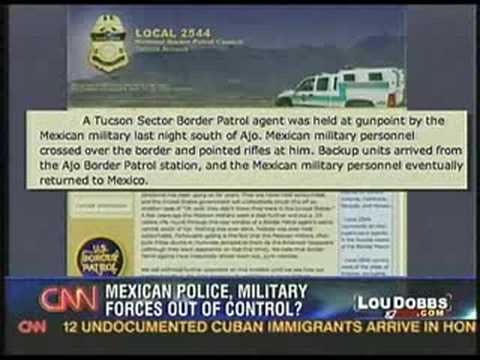 Yes, you read the title correctly. The administration that refuses to seal the border, tells our Border Patrol agents to throw things, run and hide and above all else, don’t use their guns, which we are told they train with using millions of rounds each year, is finally seeing the fruit of their policies. On January 26 of this year, two heavily armed camouflaged soldiers from Mexico actually crossed 50 yards inside Arizona and held American Border Patrol agents at gunpoint in a tense confrontation.

Armed with assault-style weapons, the Mexican soldiers retreated back south after a 35-minute standoff as if nothing ever happened and the Obama administration just let it slide. The unbelievable foray was made public by a mainstream newspaper that obtained government documents with alarming details of the January 26 incident. Specifically, the paper cites the Border Patrol Foreign Military Incursion report and a separate letter from U.S. Customs and Border Protection Commissioner R. Gil Kerlikowske, an Obama appointee who was recently sworn in.

The Mexican soldiers were spotted by a Border Patrol agent entering the U.S. about 2.5 miles west of Sasabe Arizona shortly before 9 a.m. A second federal agent positively identified the two individuals in tan, digital camouflage uniforms, on foot traveling westbound, on the United States side of the International Boundary Fence Line, according to the report obtained by the newspaper. The Mexicans misidentified themselves to U.S. Border agents and claimed to be pursuing drug smugglers, the government documents say.

Kerlikowske admits that the intruders were “confirmed members of the Mexican military” but he asserts that U.S. border officials determined that no further action was necessary involving the matter. Like a loyal Obama lapdog Kerlikowske claims military incursions from Mexico are infrequent though he was apparently forced to admit that there were 23 incidents in the Tucson and Yuma sectors of Arizona since 2010, including three this fiscal year alone.

Mexico denied the altercation, claiming that the men were drug smugglers in military uniforms.

However, Ariel Moutsatsos, minister for press and public affairs at the Mexican Embassy, told reporters, “Those individuals were part of a counter-narcotics operation, which had taken place a few minutes prior on the Mexican side of the border. The two members of the Mexican army did not see any sign notifying them that they were crossing the border.”

Uh huh, and what led them to hold US Border Patrol agents at gunpoint after failing not to know where they were? We didn’t get an answer to that, and a claim that they didn’t know they were across the border is ridiculous.

US officials, who did not wish to be named, claim that the Mexican soldiers are not chasing drug smugglers, but are, in fact, protecting cartels transporting their cargo into the US via the desert.

However, rest assured the Obama administration will be dealing with this matter seriously, right? I mean it was this administration that ran guns across the border into the hands of Mexican drug cartels, which resulted in the deaths of hundreds of Mexicans and at least two federal agents.

Don’t hold your breath that there will be any repercussions though. The U.S. Embassy in Mexico claims that the altercation was “unintentional” and that they work closely with Mexican counterparts to ensure respect for the border. Except, of course, when they don’t.

“The bilateral collaboration in these incidents testifies to the strength of our security cooperation,” a U.S. Embassy official said.

Security cooperation? It does make one wonder just how secure the border is when our own Border Patrol is held at gun point inside US borders by a members of a foreign government’s military, not to mention the invasion of illegal aliens into the country via the same method as these Mexican military personnel.

But this is only one instance. According to Judicial Watch, they have “obtained records from the Department of Homeland Security (DHS) that show Mexican military incursions occur quite often and go unpunished by the U.S. For instance, the DHS documents reveal 226 incursions by Mexican government personnel into the U.S. occurred between 1996 and 2005. In 2007 alone, 25 incursions occurred along the U.S.-Mexico border involving Mexican military and/or law enforcement. The problem has only gotten worse over the years, according to the records obtained in the course of JW’s ongoing investigation.”

If you ask me, this is not “strength of security,” but an act of war by a foreign military. What say you?