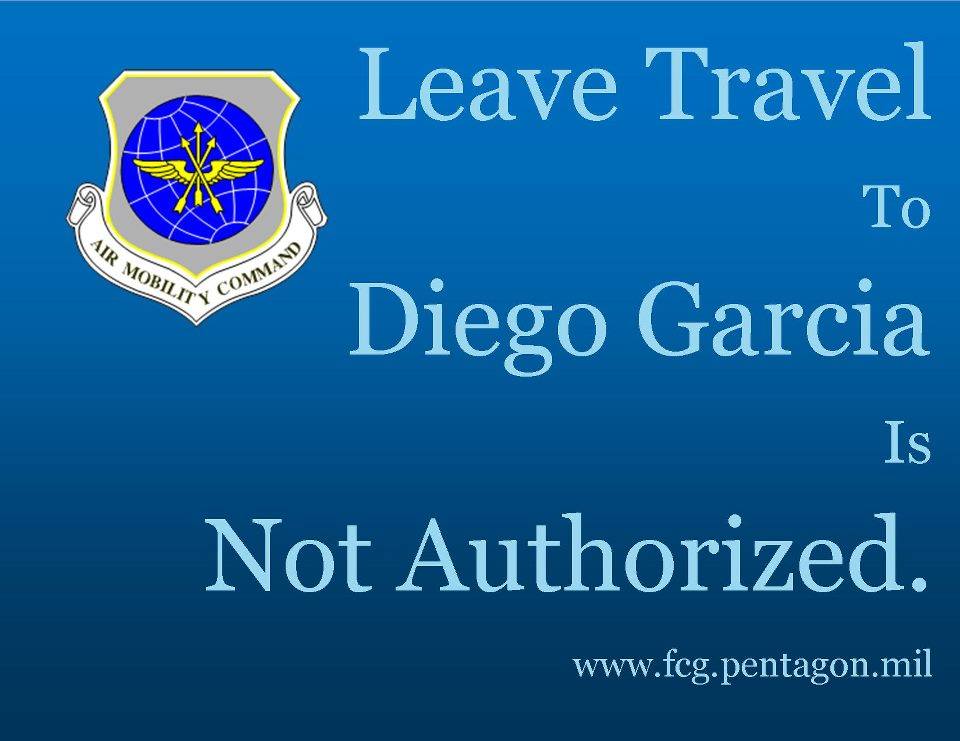 Is this another clue that Diego Garcia may hold the answers of missing Malaysian Flight 370?

The Pentagon has restricted all leave to the Diego Garcia Naval Base in the Indian Ocean. The below image was posted on April 4th to a Pentagon associated Facebook page: 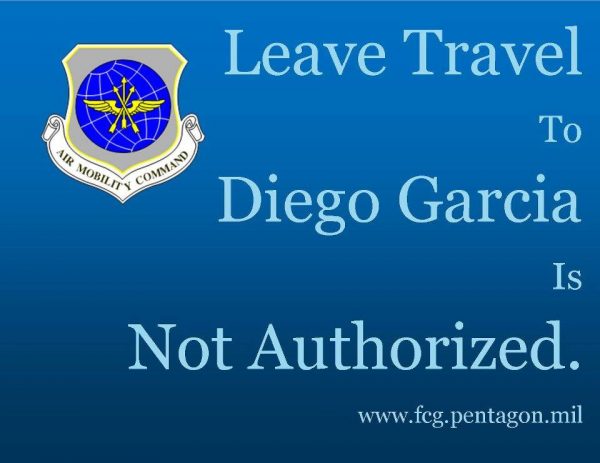 The image was accompanied by the following message:

For additional information on AMC travel, please visit our website at http://www.amc.af.mil/amctravel/index.asp

RedFlagNews is reporting that as of April 4, leave travel TO Diego Garcia, the US military and intelligence base, is not authorized.

The notice was posted on the Diego Garcia Passenger Terminal Facebook page.

Located in the Indian Ocean, Diego Garcia is described by defense observers as the “best-kept secret in the navy”. The base is loaded with advanced observation and detection equipment which should have facilitated the search of the Malaysian airlines plane MH370.

Is MH370 – or evidence of what happened to the plane – being housed there?

This is getting to be an interesting possibility indeed.

Michel Chossudovsky reported last week that the resources of Diego Garcia should have been used extensively in the search for MH370:

Located in the Indian Ocean, the US Diego Garcia military and intelligence base –described by defense observers as the “best-kept secret in the navy”– has a gamut of advanced observation and detection equipment which should have facilitated the search of the Malaysian airlines plane.

But instead, the US military preferred to remain mum on the subject, as outlined by a carefully documented article by Matthias Chang.

Ultimately, the only country with the technical resources to recover the plane – or at least its black box recorder, which could lie in water several miles deep – may be the United States. Its deep-sea vehicles ultimately hauled up the wreckage of AirFrance 447 after its 2009 crash into a remote region of the South Atlantic.

The US has a state of the art spy satellite system, with very precise capabilities of monitoring the earth’s surface, including moving objects. These technologies are part of the United States Space Surveillance Network. The Diego Garcia base “is one of only a handful of locations equipped with a Ground-based Electro-Optical Deep Space Surveillance system for tracking objects in deep space”.  Given the levels of sophistication of these observation technologies, it is highly unlikely that the MH370 flight could have travelled unnoticed over a large span of the Indian Ocean.

So the United States should have been more heavily involved in any search and/or rescue missions and, to our knowledge, they were not. Why is this important?

Well, last week we also ran into some interesting allegations that Philip Wood, an American passenger, allegedly transmitted a message and picture from Diego Garcia. Though the story seems far-fetched, it is entirely possible. The coordinates, taken from the “Image Exif data” clearly showed that the transmission came from Diego Garcia.

Can those coordinates be forged? Certainly but that does not mean that they were.

It also bears mentioning that even if the transmission was in fact sent from Diego Garcia, it does not mean that Philip Wood sent the picture and associated messages. How could his cell have held a charge for that long? If he was really incarcerated, as claimed, wouldn’t his captors make sure that internet access was impossible in the holding area?

Still it is possible and an interesting possibility that I felt was worthy of reporting.

Then, late last week, Philip Wood’s girlfriend, Sarah Bajc, appeared on CNN and dropped a bombshell. She said her sources were stating that MH370 had a military escort and that she believed the plane was intact. She believes that Philip Wood is still alive. She did NOT make any claims that the plane came to rest at Diego Garcia, but her story would seem to fit that possibility.

If that were the case, the obvious question would be why the Americans might be involved. As I reported on Friday, there were 20 employees from Freescale Semiconductor on board that plane. Some believe that they may have been privy to some very advanced military technology that might need protection. Dr. Jim Garrow has claimed that the technology has something to do with the ability to force light to pass through solid substances. That can not be verified but it is an interesting possibility.

None of these pieces of circumstantial evidence prove anything.

However, my contention since early on has been that, in 2014, it seems highly unlikely that this plane could just vanish without someone knowing where it crashed or landed. With today’s advanced surveillance technologies I simply have a hard time believing that.

So does our military cutting off Diego Garcia, as a travel destination, have anything to do with a missing Malysian Plane? I don’t know but it surely seems to be a possibility, no matter how remote.

At this point we should pray for answers whether the passengers are alive or not. These families need closure.

Update 7:24 AM… After publishing this article I decided to do some further research. It simply made no sense to me that leisure travel would be allowed to Diego Garcia in the first place. I have found an official statement by the DoD that Diego Garcia travel is “for official business only.” However, I have also found that lodging is available, through Navy Gateway Inns and Suites, and includes various amenities such as Cable-TV. What I can not determine is if this a new policy or if it is a recent policy change. There is no date accompanying the statement I found. Answering that question would go a long way in determining if this is a real red flag or simply something that has been misinterpreted. If anyone can shed light on this please leave a comment below. Always seek the truth. -Dean Garrison