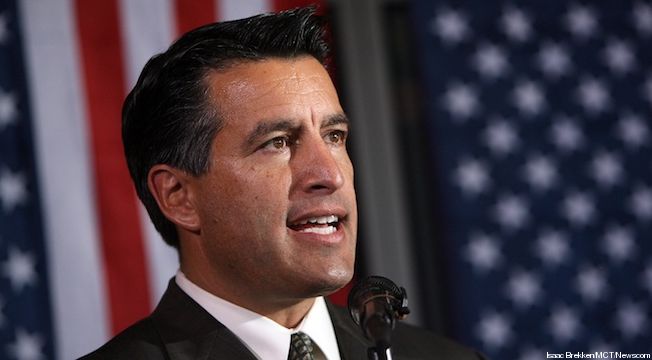 “Constitutional rights sacred to all Nevadans”

Nevada Governor Brian Sandoval has inserted himself into the escalating standoff between cattle rancher Cliven Bundy and federal officials by blasting the Bureau of Land Management (BLM) over their creation of a ‘First Amendment Area’ outside of which free speech is banned.

The ‘First Amendment Area’ set up by BLM agents is a crudely taped off piece of land inside which supporters of Bundy, who is engaged in a long running dispute with feds over grazing rights on a 600,000 acre expanse in northeastern Clark County, are allowed to express their free speech.

However, protesters have completely ignored the area, instead staging large demonstrations on Bundy’s ranch. The only presence inside the ‘First Amendment Area’ are signs which read “1st Amendment is not an area” and another that states, “Welcome to Amerika – Wake Up” alongside a hammer and sickle logo.

“Most disturbing to me is the BLM’s establishment of a ‘First Amendment Area’ that tramples upon Nevadans’ fundamental rights under the U.S. Constitution,” said Sandoval in a statement. “To that end, I have advised the BLM that such conduct is offensive to me and countless others and that the ‘First Amendment Area’ should be dismantled immediately.” 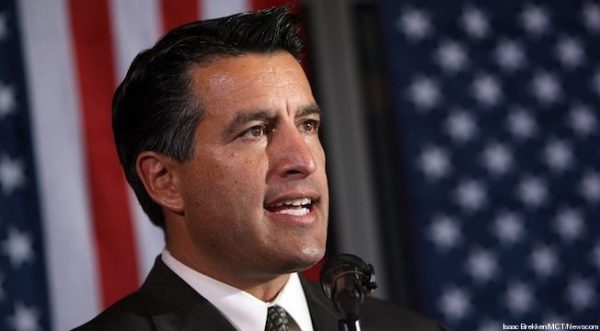 “No cow justifies the atmosphere of intimidation which currently exists nor the limitation of constitutional rights that are sacred to all Nevadans. The BLM needs to reconsider its approach to this matter and act accordingly,” asserted the Governor.

The Bundy family responded to Sandoval’s statement by saying they were disappointed that he didn’t take a more firm stance to back them in their dispute with the BLM, but they were pleased with his sentiments regarding the ‘First Amendment Area’.

The Bundy family came face to face with the consequences of violating the free speech zone on Sunday when Dave Bundy was arrested for taking video footage from a state highway of BLM agents rounding up his family’s cattle. Video footage later proved that armed snipers had their guns trained on the family during the incident.

On Sunday, Cliven Bundy promised to launch a “range war” on federal officials after they began rounding up his cattle. Authorities are justifying the move by pointing out they are simply enforcing a 1993 rule change which prevents Bundy’s livestock from grazing on the land in order to protect the endangered desert tortoise.

Bundy and his supporters see the spat as something entirely different, portraying it as a clash between out of control big government and patriotic American family farmers.

With Bundy’s ranch under constant surveillance from armed agents ensconced inside what Ryan Bundy described as a “military compound,” some fear the standoff could lead to a Ruby Ridge or Waco-style tragedy.