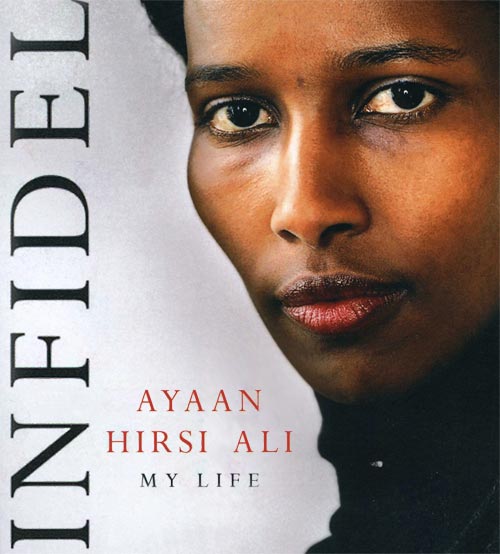 On the eve of the bloody anniversary of the Boston Marathon bombings, Brandeis University (just nine miles west of Boston)  said Tuesday that it would cave to Islamic thugs and bullies and  rescind an honorary degree that it had awarded to Ayaan Hirsi Ali, a campaigner for women’s rights and a fierce critic of Islamic gender apartheid, creed apartheid and supremacism.

Ayaan Hirsi Ali is an extraordinary woman. Arguably one of the most brave and outspoken human rights activists of our time, Ali is a fierce defender of women’s rights in Islamic societies. Born in Mogadishu, Somalia,  and raised in Muslim countries, she suffered the misogyny and relentless oppression of daily life under the sharia and was forced to undergo the unimaginable pain and horror of  female genital mutilation.

“She escaped an arranged marriage by immigrating to the Netherlands in 1992 and served as a member of the Dutch parliament from 2003 to 2006. In parliament, she worked on furthering the integration of non-Western immigrants into Dutch society and defending the rights of women in Dutch Muslim society. In 2004, together with director Theo van Gogh, she made Submission, a film about the oppression of women in conservative Islamic cultures. The airing of the film on Dutch television resulted in the assassination of Mr. van Gogh by an Islamic extremist. At AEI, Ms. Hirsi Ali researches the relationship between the West and Islam, women’s rights in Islam, violence against women propagated by religious and cultural arguments, and Islam in Europe.” (source)

Ayaan Hirsi Ali, under a death fatwa for the past decade, lives under police protection.

Ms. Ali was scheduled to receive an honorary degree from Brandeis University. Who is more deserving of recognition?  Almost as soon as the announcement was made, Muslim Brotherhood groups like Hamas-CAIR and their American sharia enforcers waged a jihad against this honor and demanded Brandeis to rescind the degree.

“We believe offering such an award to a promoter of religious prejudice such as Ali is equivalent to promoting the work of white supremacists and anti-Semites. Granting her an honorary degree is unworthy of the American tradition of civil liberty and religious freedom represented by Justice Louis Brandeis and the great university that carries his name.

“While Ali is free to spew anti-Muslim hate in any venue she chooses, she does not have a similar right to be honored for that hate by a prestigious university.

“Whatever Ali has done in the area of human rights has been irreparably tarnished by her anti-Muslim and anti-constitutional rhetoric.

Vicious supremacists (some of whose leadership has been convicted of terror related crimes) have waged a covert war to impose the free speech restrictions under Islamic law on media and academia. And they have done it. There is a blacklist of voices of freedom, while our worst enemies are feted and paid obscene amounts to spew their hate and lies.

Brandeis caved to these thugs. Have they no shame? A university founded on Jewish values cancels a truth-teller.  Is there no one with any principles left? Even the sniveling NY TImes article would not stand up to this fascism. “Facing growing criticism….” Nonsense. It was Muslim thug groups, their leftist lapdogs and the usual suspects like Rashid Khalidi.

Ayaan Hirsi Ali canceled? And by whom? Clueless mental midgets doing the bidding of fanatical practitioners of the most vicious and extreme ideology on the face of the earth. No one is safe. No one. The Islamic leftist machine destroys anyone that stands in the way of their totalitarian goals.

Ayaan Hirsi Ali lived it. A woman of color, a Muslim from Somalia, she risked everything to be free and she turned her life over to educating the West of the systemic oppression and subjugation of women under Islam while forcing the Islamic world to answer for it.

But Brandeis would sooner partner with the Nazis at al Quds University.

America has come undone, lost our bearings. We must awaken our friends, neighbors, co-workers. We must teach our children. Silence in the face of this totalitarianism is sanction.

The university’s namesake, Louis Brandeis once said, “sunlight is the best disinfectant.” They have all but abandoned his principles or the idea of truth. Yes, Brandeis is in dire need of some disinfectant.

“Brandeis Cancels Plan to Give Honorary Degree to Ayaan Hirsi Ali, a Critic of Islam,” By Richard Perez-Pena and Tanzina Vegaapril, NY Times, 8, 2014

Facing growing criticism, Brandeis University said Tuesday that it had reversed course and would not award an honorary degree to Ayaan Hirsi Ali, a campaigner for women’s rights and a fierce critic of Islam, who has called the religion “a destructive, nihilistic cult of death.”

“We cannot overlook that certain of her past statements are inconsistent with Brandeis University’s core values,” the university said in a statement released eight days after it had announced that Ms. Hirsi Ali and four other people would be honored at its commencement on May 18.

The university said that the president of Brandeis, Frederick M. Lawrence, discussed the matter with Ms. Hirsi Ali on Tuesday, and that she “is welcome to join us on campus in the future to engage in a dialogue.” Universities consider it important to make a distinction between inviting a speaker who may air unpopular or provocative views that the institution does not endorse, and awarding an honorary degree, which is more akin to affirming the body of a recipient’s work.

At first, it was bloggers who noted and criticized the plan to honor Ms. Hirsi Ali, a visiting fellow at the American Enterprise Institute. Within a few days, a Brandeis student started an online petition against the decision at Change.org, drawing thousands of signatures. The Council on American-Islamic Relations, a civil rights and advocacy group, took note, contacting its members though email and social media, and urging them to protest to the university.

On Tuesday, a student newspaper, The Justice, reported on the controversy, and the Council on American-Islamic Relations sent a letter to Dr. Lawrence, referring to Ms. Hirsi Ali as a “notorious Islamophobe.”

In its statement, Brandeis said, “For all concerned, we regret that we were not aware of” Ms. Hirsi Ali’s record of anti-Islam statements, though those comments have been fairly widely publicized.

“You would think that someone at Brandeis would have learned to use Google,” said Rashid Khalidi, a professor of Arab studies at Columbia University, who said he thought Brandeis had arrived at the right position: not awarding a degree, but welcoming Ms. Hirsi Ali to speak.

Having drawn fire for inviting Ms. Hirsi Ali, Brandeis may now take criticism from other camps, whether for disavowing Ms. Hirsi Ali’s views, or for giving in to Muslim activists.

Even some of Ms. Hirsi Ali’s critics say they understand her hostility to Islam, given her experiences, though they think she goes too far. A native of Somalia, she has written and spoken extensively of her experience as a Muslim girl in East Africa, including undergoing genital mutilation, a practice she has vigorously opposed, and her family’s attempts to force her to marry a man against her wishes.

She moved to the Netherlands as a young woman, and she was later elected to the Dutch Parliament. She wrote the screenplay for “Submission,” a 2004 film critical of the treatment of Muslim women. Shortly after its release, the director, Theo van Gogh, was murdered on an Amsterdam street by a radical Islamist, who pinned to the victim’s body a threat to kill Ms. Hirsi Ali as well.

“She has her very real personal story, she has her views, and she’s free to say what she’d like to say,” said Maya Berry, executive director of the Arab American Institute, an advocacy group. “But for an institution like Brandeis to choose to honor someone like this is really disappointing.”

In 2007, Ms. Hirsi Ali gave an interview to The London Evening Standard that was, by her own telling, the most unvarnished public expression of her views to that point, including the “cult of death” comment. She advocated the closing of Islamic schools in the West and said that “violence is inherent in Islam” and that “Islam is the new fascism.”

Later that year, in an interview with Reason, she said, “I think we are at war with Islam,” and said it must be defeated. “It’s very difficult to even talk about peace now,” she said. “They’re not interested in peace.”

Western leaders like George W. Bush and Tony Blair were striking a very different tone, insisting that they were at war with terrorist factions, not Islam as a whole.

Brandeis said last week that it intended to confer honorary degrees on five recipients, including Ms. Hirsi Ali. One of the recipients is Jill Abramson, the executive editor of The New York Times.