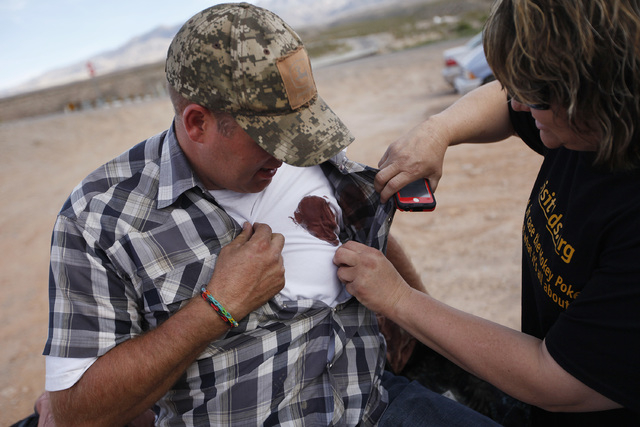 Bureau of Land Management agents assaulted a cancer victim, set a dog on a pregnant woman and tasered Ammon Bundy during a confrontation yesterday as the dispute between Nevada cattle rancher Cliven Bundy, his supporters and the feds threatened to boil over.

Video of the incident shows BLM agents exiting their vehicles near the intersection of Gold Butte Road and state Route 170, a few miles from the Bundy ranch. The BLM claims they were responding to a BLM truck being struck by a protester during an earlier incident. Protesters claimed the agents were there to “punish” them for daring to violate a “First Amendment Area” set up by the feds, outside of which free speech is banned.

Armed with attack dogs and taser weapons, the BLM agents attempt to push the protesters back.

Ammon Bundy, son of Cliven Bundy, was hit by a taser but supporters managed to pull out the barbs before he could be incapacitated.

Cliven Bundy’s sister, Margaret Houston, was also thrown to the ground by a BLM agent.

“I have 11 children, I’m 57 years old and they threw me to the dirt….I was just taking pictures, I just said get out of here,” said Houston, a recovering cancer victim, later telling a news station that she was also hit by a vehicle.

Asserting he was prepared to die for his land, another Bundy family relative stated, “I just saw federal agents throw my aunt on the ground, I saw my cousin get tased three times, I saw them pull dogs and sick it on a pregnant woman….I got hit by multiple vehicles because I wanted a couple of questions….this is America and they are the aggressors, we are not the aggressors.”

Protesters chanted “no BLM” as the standoff came to an end and BLM agents began to leave while being yelled at to “get out of here!”

According to the Las Vegas Review Journal, “serious bloodshed was narrowly avoided” during the confrontation.

The Bundy family is currently under constant surveillance by around 200 armed federal agents in a military compound near the ranch. Authorities are enforcing a law that forbids grazing rights on federal land under the justification of protecting an endangered desert tortoise. Bundy and his supporters insist that the spat has nothing to do with unpaid grazing fees or tortoises and everything to do with an out of control big government asserting its power over patriotic Americans.

The feds have rounded up 352 of Bundy’s animals so far. Armed militia groups are now heading to the area to express support for Bundy while making assurances that they only intend to document the situation and have no interest in sparking violence.

Yesterday, Nevada Governor Brian Sandoval blasted the feds’ handling of the situation, adding that the BLM’s establishment of a ‘First Amendment Area’ “tramples upon Nevadans’ fundamental rights under the U.S. Constitution.”

The Bundy family came face to face with the consequences of violating the free speech zone on Sunday when Dave Bundy was arrested for taking video footage from a state highway of BLM agents rounding up his family’s cattle. Video footage later proved that armed snipers had their guns trained on the family during the incident.

Sen. Dean Heller, R-Nev. also publicly issued a statement expressing “great disappointment with the way that this situation is being handled.”

Watch another video of the confrontation from yesterday below.