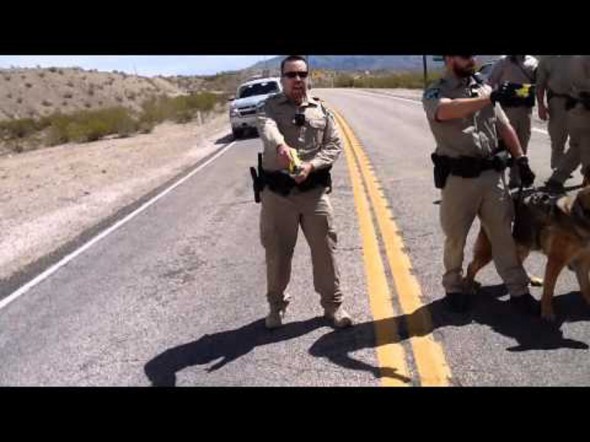 Spencer Schillig thrown to the ground, handcuffed for demonstrating against seizure of cattle

Bureau of Land Management agents assaulted and arrested two brothers who were protesting on behalf of Nevada cattle rancher Cliven Bundy last night, threatening the men with tasers and detaining them for hours.

The BLM claimed Tyler and Spencer Schillig were trespassing as they walked near a federal holding pen where some of the cattle that the federal agency has seized from Bundy were being held.

Spencer Schillig told Infowars reporter David Knight that his intention was not to interfere with but to protest the federal operation. He obeyed orders to stop but was quickly thrown to the ground and handcuffed, sustaining injuries to his head and neck.

“No warning at all, and I was not being aggressive physically in any way,” said Schillig, adding that he was detained for 2 hours before being charged with interfering with an agency function and disorderly conduct and violent behavior.

Tyler Schillig was also arrested while a third brother was not arrested.

The incident followed a confrontation between protesters and BLM officials the day before during which Bureau of Land Management agents assaulted a cancer victim, set a dog on a pregnant woman and tasered Ammon Bundy.

The BLM is currently rounding up Cliven Bundy’s cattle to enforce a regulation in order to protect an endangered desert tortoise after 600,000 acres of public land was reclassified as federal property. Bundy and his supporters assert the move represents big government gone rogue and have vowed to take a stand.

Yesterday, 20 cowboys defied the federal blockade to round up around 30 head of cattle. They were confronted by BLM agents but the feds were outnumbered and had to back off.

A ludicrous ‘First Amendment Area’ set up by the BLM which was completely ignored by protesters and subsequently scorned by the Governor of Nevada was taken down yesterday.

“It took five minutes. They hooked a truck onto it, and bing, bang, boom the fence was gone,” Bunkerville resident Jim Olson told the Las Vegas Review Journal. “Of course the publicity has just been horrid, and they (BLM officials) are not handling it very well.”

State lawmakers from Arizona to Washington are heading to Nevada to show support for the Bundy family as the story garners national attention. Numerous militia members under the banner of the Oath Keepers organization have also arrived on the scene, with many more to follow.