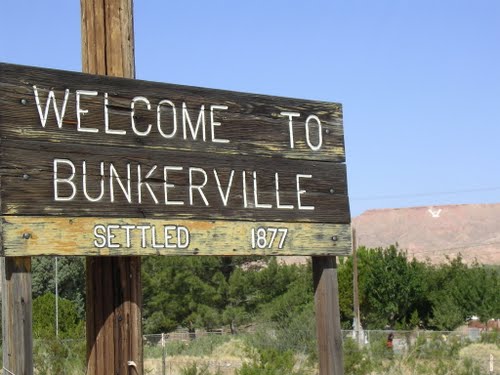 Earlier today we reported on the fracking potential of this land. Chris Carrington now takes it a step further by exposing the mining potential. And…the fact that the federal government willfully slaughtered 700 of the turtles they are claiming to protect. -Dean Garrison, Editor

There are literally hundreds of mines in Clark County, Nevada. So many that you have to wonder how the land above doesn’t collapse. 101 of these mines are in the Bunkervillearea, and of those 101 mines 58 are in Bureau of Land Management areas. The list of minerals underground in the BLM area mines is impressive. Click on the links to find out more about the minerals.

These are just the minerals in mines on BLM land. Other mines in the immediate area contain a huge variety of minerals including Olivine, sometimes known as Peridot, which is the next big thing in green energy. While on the subject of energy…

In 2009 Interior Secretary Ken Salazar authorized the BLM to open four renewable Energy Coordination Offices. These offices were set up to expedite renewable energy development on the National System of Public Lands. They were located in Wyoming, California, Arizona and Nevada. A National renewable energy Office has also been opened at the BLM head office in Washington D.C.

Okay, back to minerals.

The government owns the rights to minerals both on and under land that is in its ownership. The only way around this is a Color of Title which in short means that if someone has used public land without issue, and without knowing it was public land for 20 years or more and can prove that they have improved  that land, they can purchase it from the government and they then have full ownership of all mineral rights on that land.

Many of the minerals on the public land around Bunkerville have a high value, either in their basic form, such as the precious metals, or for their industrial applications.

Muscovite is a fine example. Also known as Mica. From geology.com:

While ground mica might sell for $300 per metric ton, sheet mica for specialty uses can sell for prices up to $2000 per kilogram. Mica has several properties that make it suitable for very special uses, and it is abundant in the Bunkerville area:

1) it can be split into thin sheets

3) it is stable when exposed to electricity, light, moisture and extreme temperatures

Beryllium is another example. The United States Geological report on Beryllium (2010) states:

“Due to its high costs beryllium is only used in applications where its properties are crucial. Therefore, it is hard to substitute. Nevertheless, certain metal matrix or organic composites, high-strength grades of aluminum, pyrolytic graphite, silicon carbide, steel, or titanium may be substituted for beryllium metal or beryllium composites. There are some more possible substitutes in specific alloys, but often combined with a loss in performance.” (source)

There is only one mine in the area that contains the high value metals platinum and Palladium. It’s on BLM controlled land and it’s owned by Glencore Xtrata. Here’s the link. You are only allowed three free clicks so if you want a copy for any reason bear that in mind.

Glencore Xtrata has given the mines the official name – Bunkerville Project.

Now I have to be honest and tell you I found this by accident. I had searched every which way from Wednesday to find out everything I could about Bunkerville, the area, the people and why the standoff at the Bundy Ranch is happening. An inadvertent click and I was faced with something called the Bunkerville Project and Glencore Xtrata. The thing is the link there is the only place I can find ANYTHING about Glencore Xtrata having a presence in Nevada. All the official mining lists fail to mention them as owners or even interested players in the area. In addition, you can Google until you are blue in the face trying to find a link between Glencore Xtrata and Bunkerville but nothing comes up. Hits by the hundred…but the Bunkerville bit crossed through in grey underneath the listing.

Oil and gas are also considered to be minerals and they are therefore owned by whoever has the mineral rights to the  land.

In the United States and a few other countries, ownership of mineral resources was originally granted to the individuals or organizations that owned the surface. These property owners had both “surface rights” and “mineral rights”. This complete private ownership is known as a “fee simple estate”.

Fee simple is the most basic type of ownership. The owner controls the surface, the subsurface and the air above a property. The owner also has the freedom to sell, lease, gift or bequest these rights individually or entirely to others. (source)

So when the BLM sold gas leases to six companies a few weeks ago they were perfectly within their rights to do so. At an auction, in Reno Oil and Gas leases were sold to six different companies for a total of more than $1.25m (source). The leases were for land in Elko County, Nevada.

With everything from gold to uranium , muscovite to platinum lying in the ground it’s ridiculous for the government to claim they are merely trying to protect the desert tortoise. Nobody believes it, especially when just a few months ago they killed 700 of them at the Las Vegas sanctuary in order to save money. The Bureau of Land Management currently funds the conservation and research center with fees inflicted on those who disturb tortoise habitats. During the housing boom in the early 2000s, the conservation center had plenty of cash, since developers were frequently fined for disturbing such habitats. But since the recession, the BLM has struggled to meet its annual $1 million budget.

Over the past 11 months, the BLM has only accumulated $290,000 in federal mitigation fees that developers are forced to pay. (source)

Sadly, his days are numbered courtesy of the BLM

The standoff in Bunkerville is about money, nothing more and nothing less. It’s likely that companies such as Glencore Xtrata intend to start mining in the area, and they can’t do that with cattle wandering around. They will need to have the area around their operations fenced and secure, so the Bundy cattle have to go, one way or another.