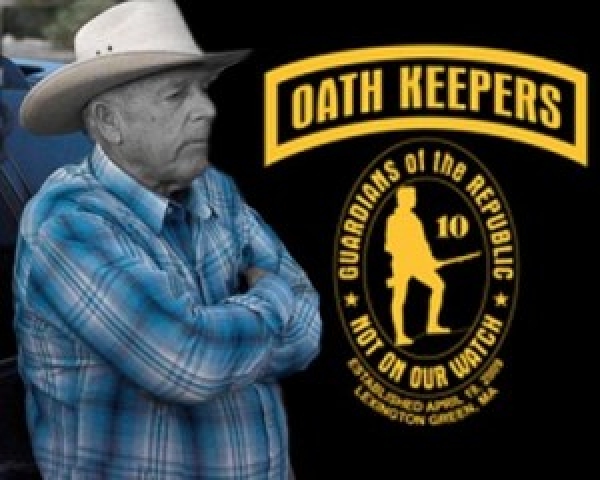 Things are escalating quickly in the public land use dispute between the Bureau of Land Management (BLM) and a 67-year-old cattle rancher and his family.

While Bundy’s family has grazed cattle on the land in question since the 1870s, the state decided to officially outlaw cattle grazing in the area in an Agenda 21-esque move back in 1998 under the guise of protecting the environment for the endangered desert tortoise.

Now BLM says that, not only has Bundy has refused to pay the federal government for “grazing rights” for the last 20 years, but they have officially declared that his cattle are now “trespassing” on what is supposed to be public land.

As reported yesterday, apparently that’s worth calling out a fully militarized federal force, including nine helicopters and a multitude of agents and even snipers, to descend on Bundy’s ranch to impound his cattle.

This picture was posted on The Truth About Guns blog April 8th by author Robert Farago: 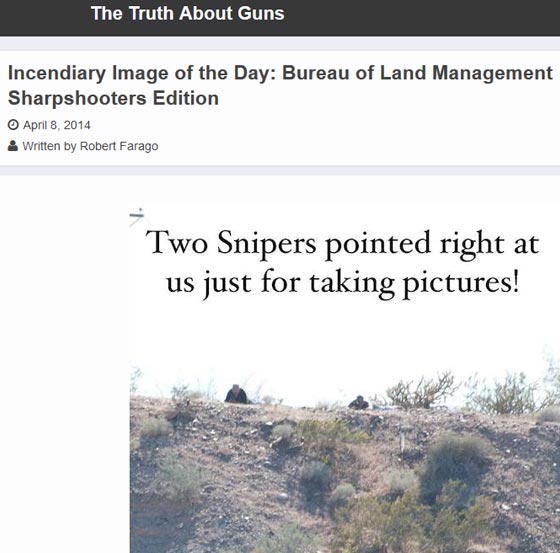 Bundy’s son Dave has already been arrested, reportedly for filming feds outside the BLM’s designated “First Amendment Area” (the feds were even thoughtful enough to put up a sign for it).

Wednesday, video surfaced of protesters, including Bundy family members, being tased, thrown to the ground and threatened with K-9s by BLM officers.

In response to the mounting dispute and worries this could become the next Ruby Ridge or Waco, militias from all across the country, including Texas, Montana, Utah, New Hampshire, and Florida, have mobilised to stand with the Bundy family and others protesting the BLM.

Now Oath Keepers, a non-partisan association of 40,000 current serving and former military, police, and first responders who have pledged to fulfill their oaths to ‘defend the Constitution against all enemies, foreign and domestic,’” has released a statement that they, too, will stand by the Bundys against the corrupt actions of this government.

It reads in part:

This is not about cattle.  This is about power, and the trampling of rights.  It’s about a systemic power grab and abuse of power by the federal government as it runs roughshod over the rights of honest, hard-working rural Americans and over the rights of all the Western states.  This is not an isolated incident.  It is but the latest in a long train of abuses aimed at subjecting rural Americans to absolute despotism while destroying the property rights, economy, and independence of the rural West, in particular, and eventually wiping out all of rural America.  This is an attack on all of the West, which is why patriotic legislators and lawmen from all over the West are answering the call to defend it.

And it is not just ranching that is under attack.  It is also mining, farming, logging, fishing, oil and gas, and any other industry that uses natural resources or the land.   This is a full spectrum, frontal assault on the rural West.   Ultimately, it is about bankrupting and impoverishing independent rural Americans to bring on a planned depopulation of the West.

This is truly a range war, and it is being waged by all three branches of the federal government, including complicit federal judges who “make it legal” through their willful rulings that strip away any meaningful redress or shelter for ranchers and farmers who have worked the land for generations only to now be told that they can no longer do so because of one endangered species or another.  Entire regions of the West are being shut down and impoverished using this tactic.

In this case, the Bundy family has run cattle on that same range since 1877 and they used to have fifty-two neighboring ranchers who did the same.  Now, using the Desert Tortoise as the weapon of choice, the federal government has run all the other ranchers in Clark County, Nevada out of business, and Cliven Bundy truly is the last man standing.   And it is also about all Nevadans being “prohibited” from using their own “Public Land” and the fact that the Feds were imposing their will over the state and it’s people at gun-point.

Unless We the People begin to take a meaningful stand now, in full support of our patriotic state public servants who are willing to lead us, the domestic enemies of the Constitution will not stop until the West is a land of ghost towns, devoid of people, and we are all crammed into city slums, totally dependent and weak, with no protection of our rights, like third-world urbanized peons under the arbitrary and capricious control of corrupt dictators.

The statement also called out Nevada Governor Sandoval — who has publicly criticized the BLM for “intimidation” and trampling upon Nevadans’ fundamental rights with so-called “First Amendment areas” but done little else — for not showing up in person himself and ordering the Nevada Highway Patrol to stand between the people and an “out of control” BLM. Nevada State Assemblywoman Michele Fiore showed up yesterday to stand vigil, saying, “we are here because the Governor is not.”

Oath Keepers is calling on anyone who can make it to Bunkersville, Nevada to peacefully stand with Cliven Bundy and his family and to stand up for the Constitution of the United States of America and the rights of the people against a corrupt government that would subvert us all:

We therefore call on all liberty-loving Americans who can possibly make it to Bunkerville, Nevada to join us in this vigil, NOW, in direct support of oath-keeping Western lawmakers and lawmen as they stand guard over the rights of the people and begin to push back against federal abuse.  Come take a meaningful stand, in a real fight where it counts the most – in our states.  This is far, far more important than any trip to Washington D.C. to wave signs and yell at a deaf and blind Congress, White House, or Supreme Court.  This is where the real battle is, and where you belong.  This is where you can make a real difference, and begin the restoration of the Republic, from the bottom up.

In other news, Natural News has just reported that the BLM is cashing is hardcore to the tune of millions on fracking operations in the very land from which they are trying to evict the Bundys. (Hat tip: Jason Rivera)