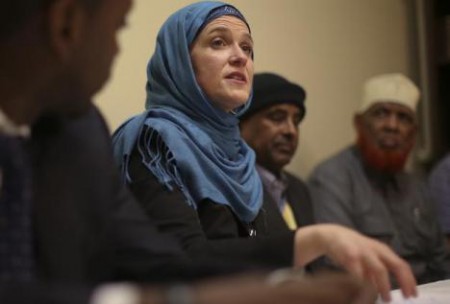 Minneapolis is a hub for Somali Muslims, so much so that they have taken to politics to “get a seat at the table.” It’s not too hard to get in, because the powers that be have already kowtowed to Sharia. Minneapolis mayor Betsy Hodges took sharia submission a step further, in donning a full hijab when meeting with Somali Muslims. Was this to appeal to a lobby that is growing in power and prominence? It’s likely, but she also importantly positions herself to fill in her city staff. Any bets on who will fill one of these positions? Wearing a hijab is more than just wearing a “headscarf.” It is a powerful statement of Islamic submission. This is what Minneapolis mayor Betsy Hodges is conveying.

In her first 100 days in office, Minneapolis Mayor Betsy Hodges has held hands with the Dalai Lama and traveled to the White House. She has spent a fifth of her time traveling for business: Three trips to Washington, D.C., two to New York City and one to Portland, Ore. But she has not pushed many new plans, instead building her own team and deepening relationships, particularly with Somali-Americans.

And at a time when growing Minneapolis is a priority, Hodges has yet to appoint people to two of the most important positions in the city, the director for economic development and the city coordinator. The Cradle-to-K Cabinet she touted on the campaign trail to support early childhood health and education is not yet filled.

Betsy Hodges is making inroads with the Somali Muslim community. The only way to do this successfully is don the most distinctive article of clothing Muslim women wear. The hijab nauseatingly signifies everything that is deadly about Islam. It is brutally misogynistic. “The Quran gives Muslim men permission to beat their wives for disobedience, but nowhere does it command love in marriage.  It plainly says that husbands are “a degree above” wives.  Unlike a man, she must also cover her head – and often her face.” She must wear a hijab to hide herself, because she is not worthy to be seen. Minneapolis mayor Betsy Hodges is signaling solidarity with Sharia law, in wearing the offensive hijab.

“I figure in a year, no one will care that it took extra time to hire my staff … but they will care if we get it wrong,” said Hodges, a council member for eight years before winning last fall’s mayoral race.

On another day, hours after she lost the Southwest light-rail vote, she visited a Somali mall on E. 24th Street in a blue hijab, accompanied by her Somali liaison, Abdirahman Muse. Hodges’ office said she is fulfilling many of the promises she put forth in a 100-day plan for the Somali community, including asking the city attorney for a review of small business regulations.

In an upstairs room, Somali shopkeepers praised her for showing up, and poured out their concerns through translators, telling her they needed more space to park, more opportunities for idle youth, and more Somali police officers.

“The parking issue is challenging,” she told them. “And I will be honest, there are not easy solutions.”

After February 28th, 2014 was declared “Hijab Day” in Minneapolis, it is easy to see that the city of Minneapolis is imposing Sharia on its citizens. The population of Somali Muslims continues to grow in number and power, and influence, but the Minneapolis mayor is expressing sharia compliance. So goes the city of Minneapolis, and the entire United States. This is not willful ignorance, but acceptance and compliance on the part of those in power. Submit to sharia by force. It is happening, even if it is not overtly obvious. Betsy Hodges proves the point.

Somalis in the Twin Cities say that they are moving into politics to “have a seat at the table.”

For years, they’ve been on the receiving end of what the public has given them, whether it’s been financial aid, housing, schooling or medical care. Now they would like a say in what they get, if anything, and how it is given.

The emphasis needs to be placed on having a “seat at the table.” They don’t want a seat at the table, they want to devour the table, and to take out anyone who does not accept sharia law. From the looks of how events are unfolding in Minneapolis, finding people in favor of full sharia compliance should be as easy as finding decent snow shovels. It’s already in place.