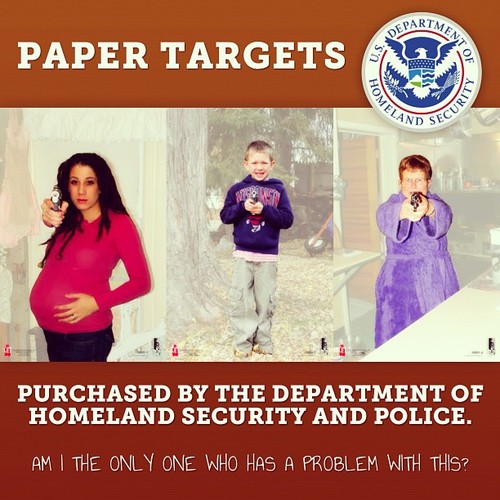 Many talk about the fact that Americans have an estimated 300 million privately owned hand guns as the reason why no foreign power, or even our government, can subjugate the people. I am compelled to disagree. If our government ever became abusive enough that the people felt the need to rebel, there is a new generation of super weapons being developed which would doom any rebellion.

Although Yamamoto once refused to invade the United States following his attack upon Pearl Harbor because there would be “an American with a gun behind every blade of grass”, these super weapons would have changed his mind, thus, making America vulnerable to tyrants and foreign invaders. As a result, the window to resist martial law occupation and even an invasion is quickly closing.

Who will ever forget the well-publicized DHS paper targets, depicting the following targets, as a reminder as to who DHS feels is the real enemy.

The rules of Guerrilla warfare are about to change. Although many of the weapons described below are not yet deployed, it is merely a matter of time. Afghanistan is proving to be the beta testing ground for many of these weapons as is Iraq.  The following technological breakthroughs in military technology have very little value on the battlefield in a conventional war. These weapons systems are anti-guerrilla orientated and they are designed for Americans who will soon try to put a stop to the unfolding tyranny of the bankers who have hijacked our government. We are entering into a new type of guerrilla warfare with extreme counter-measures designed and created by DARPA which is the top secret research arm for the Department of Defense.

DARPA’s sole purpose is built around the goal of developing more efficient and greater means of killing. For those of you who have not figured out that we are about to enter American hunting season and you are the game, you should know that if these weapons systems are ever deployed in sufficient numbers, the game is over. 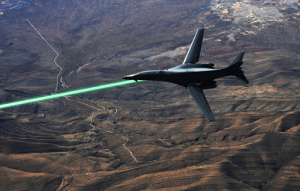 Project Endurance, is referred to in DARPA’s 2014 budget request as being tasked with the development of “technology for pod-mounted lasers to protect a variety of airborne platforms from emerging and legacy EO/IR guided surface-to-air missiles.” The budget explains that it will be the first application of DARPA’s much-touted Excalibur laser defense system, which developed lasers powerful enough to use as weapons.

Project Endurance is capable of producing drones, armed with lasers, which could shoot down inbound ICBM’s with a nuclear payload. Further, the system comes equipped with facial recognition software which is capable of reading the inscription of a dime from a 100 miles away. The implications for  hunting down and dealing with political dissidents are stunning. 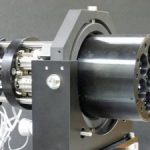 Controlling the electromagnetic (EM) spectrum is a major asset in military operations. The Marines recently developed and subsequently demonstrated an excruciating painful “heat ray,” a weapon that blasts intruders with a wave beam that targets skin and makes victims feel like they’ve stepped in front of a blazing oven, but without killing them.

Robot soldiers are coming. Some of the prototypesn reach speeds up to 30 mph. In times of civil unrest or combat, imagine your neighborhood was forcibly evacuated, these robots would make excellent clean up troops. Armed with facial recognition, rebel forces leaders could be targeted and eliminated.  There will nowhere to run and nowhere to hide.

Every Move You Make, We’ll Be Stalking You 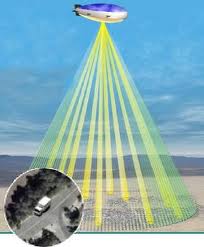 In a nowhere to run and nowhere to hide scenario, DARPA, has developed technology which allows the military to spy on entire cities with its Large Area Coverage Optical Search-while-Track and Engage (LACOSTE). LACOSTE is a program of imaging technology that will allow for “single sensor ,day or night, ongoing tactical surveillance of all moving vehicles in an urban area. LACOSTE will eventually be able to identify individual humans in the same manner with the next generation of facial recognition software. This surveillance system is being integrated into department store video surveillance, the street light turned spy Intellistreets as well as all traffic cameras. If the globalists want to find you, you better have a “cloaking” device to hide behind. More importantly, most guerrilla activities are designed to occur under the cover of darkness. The cover of darkness is no longer an ally for future American rebels. 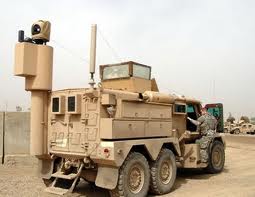 Many gun owners mistakenly believe that they are going to be able to carry out acts of guerrilla warfare and/or terrorism against an illegitimate government as they begin to lock-down the country under a martial law takeover. Thwarting most ideas of a successful revolutionary effort can be found in the Battlefield Optical Surveillance System (BOSS),which is a device that can be mounted on a truck that scans and deciphers the landscape with lasers and sensors. When it sees the almost imperceptible glint of a rifle scope, or more amazingly it also recognizes you through your retinas as the detection device “paints” you with a laser beam, just prior to your demise.

And even in the unlikely event that you can slip into firing range of your intended target, the Boomerang countermeasure system uses an array of microphones which will be able to instantly decipher the speed and direction of your shot, based on the muzzle report and the shock wave of the bullet as it zips past. Immediately, Boomerang knows where the shot came from, and even what kind of weapon was utilized. This system will reduce all future sniper missions to a Kamikaze endeavor. Therefore, it is a safe bet that prior to moving globalist controlled forces into an area to conduct a roundup, BOSS and Boomerang will be employed to detect and possible resistance and eliminate the resistance by calling in a drone strike. 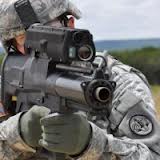 If a drone is unavailable the XM-25 is a “smart” grenade launcher. The weapon is portable and can be carried to the battlefield by a soldier, or even better, a DARPA killer robot who has orders to search and destroy a specific target which will be identified by facial recognition. Once you are located, the X-25 possess a laser range-finder built in to the weapon that can detect the distance to the wall or trench that you’re hiding behind and then blow you and your cover to oblivion. 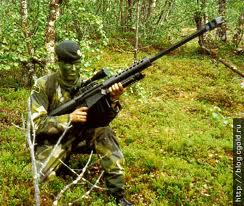 On your last trip to your local gun range, how close to 100% was your accuracy? You might want to consider that the other side has a sniper countermeasure called EXACTO, or the Extreme Accuracy Tasked Ordnance. EXACTO is the first ever guided small caliber (“smart”) bullet. If you’ve ever watched a heat-seeking missile follow a fighter jet on the big screen, then you would comprehend the idea of DARPA’s intention for creating a maneuverable and flexible bullet, which is controlled by a guidance system, that moves with the target and adjusts in mid-flight and to eventually shatters a human skull.

Maybe someone in your neighborhood struck a deal with al Qaeda and obtained a couple of RPG’s that the late Ambassador from Libya sold to the terrorists before he was murdered by the administration to make the trail go cold. You might feel that you had a chance against the armored personnel carriers which will be used by DHS. Or, maybe you could shoot down a Predator B drone prior to it launching 100,000 micro drones designed to attack troops at your position. Unfortunately for your forces, the other side possesses the Gizmodo Iron Curtain (GIC) countermeasure can protect a moving vehicle from an incoming RPG, by detecting the projectile and then detonating it. The next generation of GIC’s will be able to do the same with bullets.

It does not take a rocket scientist to project the next development using this technology. which would be employed to protect drones and other planes. When the globalist forces advance upon rebel positions, they will be nearly impervious to harm and free to carry out their mission. Do you remember the 2700 armored personnel carriers obtained by DHS? In the not too distant future, we will witness the fact that these vehicles will be virtually indestructible.

The following weapons systems constitute a game changing event. There is no way that a civilian insurgent force has the capacity to counter this technology. We know about the drones and they are deadly enough, but the MAV’s and the Killer Robot Super Soldiers are virtually invulnerable. If the coming guerrilla war is to have a chance for success, the masses have to aroused into action very soon for we are only a few years away of seeing the deployment of this technology.

America does have the capacity to resist tyranny with some degree of success as our people have more resources than any other guerrilla force in world history. America has successful military experience in its ranks in sufficient numbers to make a lot of difference. However, the key to saving America is twofold: (1) America would have to abandon its “soft” mentality; and, (2) the 10% that are awake would have arouse the majority in the time we have left. The guerrilla suppressing technology is so thorough and so completely devastating, that if the globalists are allowed to bring this technology to fruition in sufficient numbers, the game is over and the fate of humanity is sealed. For America falls to the globalists, then humanity will follow. Do I think that these two challenges can mitigated? Yes, I do. Do I think we in the alternative media will arouse a sufficient number of people to make a difference? The odds are far less than 50%.  If you share the same world-view as I do that the alternative media may not be successful in arousing America before it is too late, then you need to ask yourself what are you doing to prepare to survive in the NWO?