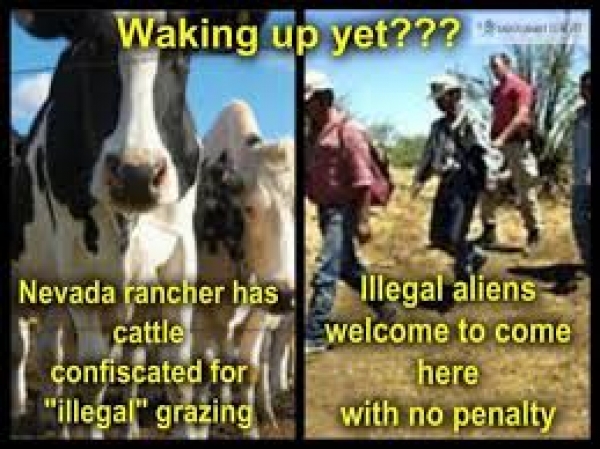 I recently received an email from Sheriff Richard Mack updating me on the recent happenings with regard to the Bundy case and Bureau of Land Management (BLM).

The Constitutional Sheriffs and Peace Officers Association (CSPOA) have traveled to Nevada to stand with the Bundy family. Additionally, the Oath Keepers have done the same. An estimated 5,000 militia types from Western states have also made their way to the Bundy property as well.

Sheriff Mack and CSPOA are responding to the storm brewing between Nevada rancher Cliven Bundy and the BLM. They have responded by stating that the all-too-frequent bullying of individual citizens by various militarized Federal agencies have usurped the Constitution and they have vowed that the forces of tyranny can be stopped. In fact, as CSPOA claims,  it’s an epidemic that “must be stopped”.

I have learned that Sheriff Mack is leaving early Saturday morning for an emergency trip to Bunkerville, Nevada, along with other members of the CSPOA posse to stand with the Bundy’s and find a peaceful resolution to this conflict (i.e., the feds going home). The name is “Bunkerville”, is both ironic and appropriately named, don’t you think? The case involving Cliven Bundy is yet another case of David vs. Goliath in what has become an all-to-familiar scene in which some agency of the Federal government swoops in, flashes their badges and guns and seizes control of the private property of an American taxpayer without so much as offering the pretense of the due process of law.

As this case was unfolding, I mentioned that this was a classic Agenda 21 case (e.g. land confiscation, fracking, etc.). However, this case has now taken on a life of its own and has become more important than a beleaguered rancher facing off against the forces of tyranny.

This is now a case of America vs. the tyranny of the federal government and who is going to blink first?

I do not think any of us could have predicted that this case would generate the attention among awakened Americans that it has. Yet, interestingly, the MSM is strangely quiet on this issue involving the Bundy family vs. the BLM.

The Arizona Legislature Stands With Bundy

In a case of “I would never have believed this in a million years”, the Arizona State Senate President Andy Biggs and the Arizona House of Representatives Speaker Dave Livingston are both in agreement that Arizona should be involved in supporting CSPOA and Oath Keepers in going to Bunkerville, Nevada. These two leaders of the Arizona Legislature have vowed to support the Cliven Bundy family. This stunning development cannot be overstated, and yet, there is more. Additionally, State Senators Al Melvin, Chester Crandall, and Kelly Ward along with State Representatives Brenda Barton, Bob Thorpe, Kelly Townsend and Warren Peterson are all planning to be at the Bundy ranch by Sunday morning. All of these local government officials are planning to attend the Press Conference Monday afternoon with the CSPOA and Oath Keepers along with the Bundy’s and other sheriffs and public officials from across the country.

The Oath Keepers Declare Their Position

It is my distinct privilege to announce that the Oath Keepers have pledged their full support for Cliven Bundy and are helping to lead the charge in challenging the tyrannical actions of the federal government. The following press release is from the Oath Keepers.

“A Delegation of state legislators, lead by Washington State Representative Matt Shea, along with a  delegation of current serving Sheriffs, lead by Sheriff Richard Mack of the Constitutional Sheriffs and Peace Officers Association, and military and police members of Oath Keepers, are converging on the site of a stand-off between federal law enforcement and Nevada Rancher Cliven Bundy, to prevent bloodshed and to stand in defense of hardworking rural Americans who are under assault by a runaway federal government.”

The expressed support state legislators is monumental and could prove historically significant because what happens over the next 72 hours at this ranch could potentially change the course of American History.

There are several possible outcomes regarding the brewing confrontation which could come to a head this weekend. Here are just a few possible scenarios which could play out in the next few days.

The BLM Backs down and Withdraws Its Occupation Forces This would be the prudent move. The BLM, in order to prevent too many in the public from finding out about their escalating level of tyranny, shy away from the confrontation and quietly withdraw the scene while vowing to return. I do not see this happening.

It Is Randy Weaver and Ruby Ridge All Over Again?

The readers may recall that Mrs. Weaver, at Ruby Ridge, was brutally murdered by the FBI for pointing a loaded baby at the FBI for which she was promptly shot in the head while standing in her kitchen. Nobody from the FBI was ever brought to justice for this heinous act. The point being here, is that if some trigger-happy BLM agent opens fire on a Bundy family member. If this happens, what will the local militia do? If they fire back, then all hell could break lose.

In this scenario, there is no doubt that DHS would get to roll out some of their newly acquired 2.2 billion rounds of ammunition to go with their 2700 armored personnel carriers. If further bloodshed were to occur, the fallen civilian victims would become martyrs. We would very likely see riots breaking out all over the country in which buildings would be burned and authorities would be defied. Personally, I do not believe that this incident can go so far as to prompt a revolution on its own. However, this issue carries the distinct possibility of defining the sides for a possible civil war in this country in the future. Again, the fact that prominent state legislators are so clearly opposed to the federal government on this issue will ultimately serve as a dividing point between the two sides if blood is spilled.

What Direction Will This Take? The Bundy fate is spelled out in this map.

In this case, the Obama administration holds all the cards. Many of us in the media feel that Obama would like nothing better than to draw a group of dissidents out in the open and crush them as a sign of absolute subjugation of the American people. Some feel that the globalist forces will avoid confrontation and continue on their steady path of conquering America one Agenda 21 policy at a time.

If I were Obama, I would choose the latter path, because it is the path of least resistance. However, we have learned that Obama is impulsive and therefore, all bets are off.

There is one thing that we can all be sure of, we are indeed watching history in the making as this has become a case of Constitutional supporting Americans vs. the Brown Shirts of the Obama administration.