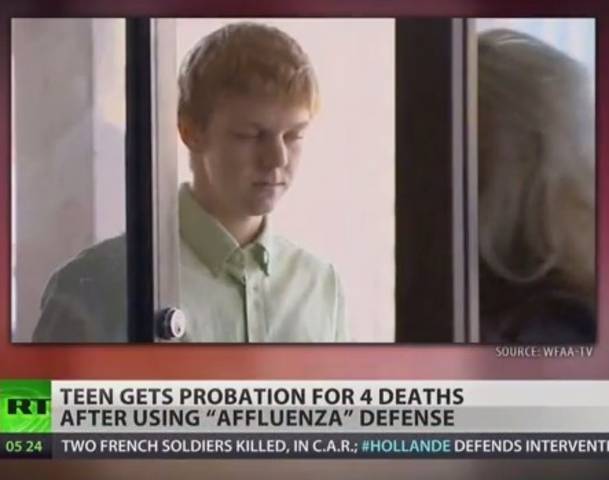 Poor little rich boy Ethan Couch is back in the news again.

You may recall the horrible case last year in which the boy from a wealthy family was prosecuted  for drunkenly mowing down and killing pedestrians while flinging two of the passengers from his truck. Using the “affluenza” defense, it was said that young Ethan could not be sent to jail for his actions because he was just too darned rich to be punished. An attempt a couple of months later to prosecute him for a related crime reaped no better results, and punishment that included time behind bars was still not forthcoming.

Ethan was sentenced to rehab and the public was assured that his parents would be footing the bill for the swanky facility. (Here’s an article about the original choice of facilities – apparently this is no longer his rehab destination.)

Now, however, in an astonishing turn of events, his parents will be required to pay a maximum of $1,170 per month. While that might sound like a lot of money to some of us, it doesn’t even pay for a full day and a half at the facility, which bills $750 per day to “rehabilitate” wealthy young addicts and criminals. (source) Ethan’s father owns Cleburne Metal Works, a company with approximately 30 employees and a yearly turnover estimated at $15 million. (source)

There is no word yet on who will be responsible for a bill that could potentially exceed a quarter of a million dollars, but I think we can all guess that the taxpayers are a likely choice. I don’t know about you, but I’m not too delighted to see our tax dollars go to support this little hoodlum in designer clothes. I’d much rather see those payments go to the families who lost loved ones due to Ethan’s drunken antics.

At this point, the continuing debacle can no longer be laid solely at the feet of Ethan or his parents. This series of outrages now rests firmly on the shoulders of the so-called “justice” system.