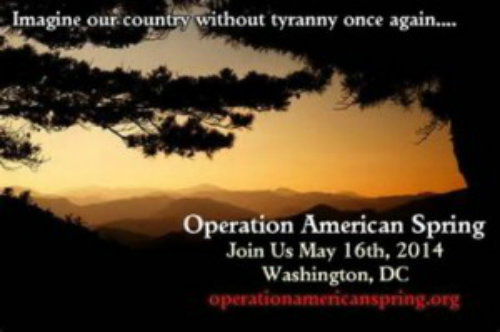 A Patriot movement, called American Spring, is set for next month. And what the government has just done may have sealed the fates of the attendees.

Friday, the State Department, whose primary function is diplomatic relations overseas, has put in a request for over 1.5 million rounds of 4 types of ammunition, 9 mm, 5.56x45mm, and 7.62x51mm and 7.62x39mm. Included in the solicitation was weapon cleaning and spare parts.

The request breaks down the ammunition as follows:

In the past five years, the State Department has requested the following ammunition. Note the quantity, and the frequency:

The April 2008 solicitation was marked “***URGENT***”, and was completed three weeks before the State Department renewed of the contract for Blackwater Worldwide, whose employees killed 17 Iraqi citizens in 2007.  Patrick Kennedy, then Undersecretary of State stated, “We cannot operate without private security firms in Iraq.”

In December of 2013, the organization, “Patriots for America” posted on their webpage a movement called, “American Spring”. Here is a video from that website:

The movement, led by retired US Colonel Harry Riley, is meant to be a peaceful effort to unseat President Obama from office, and request that all participants be unarmed and act in a civil manner. From the website:

Mission: Restoration of Constitutional government, rule of law, freedom, liberty “of the people, for the people, by the people” from despotic and tyrannical federal leadership.

Phase 1 – Field millions, as many as ten million, patriots who will assemble in a peaceful, non-violent, physically unarmed (Spiritually/Constitutionally armed), display of unswerving loyalty to the US Constitution and against the incumbent government leadership, in Washington, D.C., with the mission to replace with law abiding leadership. Go full-bore, no looking back, steadfast in the mission.

Phase 2 – One million or more of the assembled 10 million must be prepared to stay in D.C. as long as it takes to see Obama, Biden, Reid, McConnell, Boehner, Pelosi, and Attorney General Holder removed from office.

Consistent with the US Constitution, as required, the U.S. Congress will take appropriate action, execute appropriate legislation, deal with vacancies, or U.S. States will appoint replacements for positions vacated consistent with established constitutional requirements.

Phase 3 – Those with the principles of a West, Cruz, Dr. Ben Carson, Lee, DeMint, Paul, Gov Walker, Sessions, Gowdy, Jordan, should comprise a tribunal and assume positions of authority to convene investigations, recommend appropriate charges against politicians and government employees to the new U.S. Attorney General appointed by the new President.

*All actions in Phase 2 & 3 will be consistent with the U.S. Constitution.

Colonel Riley has correctly assumed two things: There may bloodshed, and the administration will do what it can to quell dissent.

The “American Spring” is to take place in Washington DC on May 16th. What may happen, and will happen, may be two entirely different events. But given this Administration’s efforts to destroy the Constitution and stay in power, anything can happen.