Like I said on a previous post yesterday regarding similar Islamic insurgencies in Sweden and across Europe,  we see a continuing escalation of this low-grade civil war in Europe. What next, walled off city-states?

One thing is for certain. Europe is going to explode.

But what is paramount and top priority is — the silencing of critics of  Islam. That is the obsession of the EU and member states. Sharia compliance.

PARIS — Violent crime can happen anywhere and to anyone and for many reasons, but in Muslim-controlled parts of France, it has become especially dangerous to be white.

Surveillance camera video shows white French being beaten up by predominantly Muslim immigrant gangs in the Metro and on the street.

Islamic immigrants consider it their territory and whites enter at their own risk. The French call them “sensitive urban zones” — no-go zones where the police don’t enter or don’t enforce the law.

Some call them little Muslim caliphates inside the borders of France.

“And it’s like that because these parts of the country are in the hands of drug traffickers, gangs and imams [Islamic leaders],” French commentator Guy Milliere explained.

A French report says almost 1 in 5 French have been victims of racist insults or worse. A few cases have even gone to trial.

“Some of those who launch racist attacks on whites use Islam as the reason they do it. They may not even speak Arabic, but they still use Islam as a ‘flag,’” Tarik Yildiz, a French sociologist, said.

Yildiz, author of the book, Anti-White Racism, is not native French but is the son of Turkish immigrants.

“My book is viewed as politically incorrect and breaks a taboo: the idea that immigrants could oppress whites,” Yildez said.

It’s a reality for a Frenchman named Max, who asked that CBN News not use his last name.

He’s been attacked more than once by immigrants and still has a bruise under one eye from the latest attack when we interviewed him.

“(Generation Identitaire) is a youth organization which seeks to protect our local, national and European identities,” Max said.

“We encourage all our members and militants to keep a certain level of physical fitness. Self-defense is a part of it, obviously,” Max said.

As the French Left’s grand experiment in multiculturalism goes up in in the flames, some quarters of French society are dividing into tribalism and ethnic identity.

At a Paris café, CBN News discussed the problem with anti-Islamization activists Pierre Cassen, of the website Riposte Laique, and Christine Tasin of Résistance Républicaine.

“The French people are increasingly living in fear.  They fear the imposition of Islamic law and the organized violence against any French person, including the police,” Cassen said.

“The republic is in danger,” Tasin warned.

Generation Identitaire members now go out on a security patrols.

CBN News asked Yildiz if, by pretending there isn’t a problem, the French establishment and media are only helping to ensure that more native French will seek out groups like Generation Identitaire for protection.

“Exactly,” he replied. “If the state will not punish these people and the media will not talk about it, the victims will get increasingly frustrated and become racist and we will have a confrontation.”

But not only is the problem being largely ignored, the French Left and many mayors actively promote the growth and spread of sectarian Islam, for their own good reason: Muslims have become an important constituency of the Left.

In fact, 93 percent voted for socialist President Francois Hollande in the last election.

Former Muslim Pascal Hilout took CBN News to a mosque in the Paris district of Barbes that the city government of Paris is paying to renovate.

The name of the mosque is in Arabic, so perhaps the French don’t realize that they’re paying to renovate a mosque named “Conquest” (Al-Fath).

Hilout said the mosque is like a separate nation inside France: “Lebanonization,” Hilout called it.

“The lebanonization or balkanization of France is beginning already with the help of the state of France,” he said.

“Lebanon” is a word many use to describe France’s future as a divided nation gripped by sectarian conflict.

“The French feel out-numbered, out-maneuvered and in the minority,” Cassen told CBN News. “If things continue at this rate, we will have the same situation as in Kosovo or Lebanon…civil war. 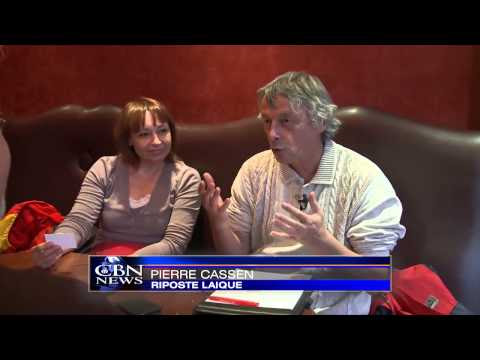