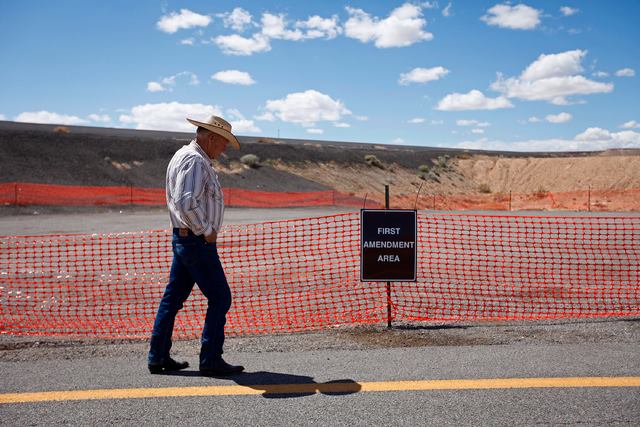 Editor’s Note: Merijoe sent this to me Saturday, before the developments of the weekend. I didn’t get it published in time. However, since the situation is obviously not resolved I thought I would share it with you. Some of the information on the cattle confiscation is now obsolete but this is a good first hand account of how the situation came to be. -Dean Garrison 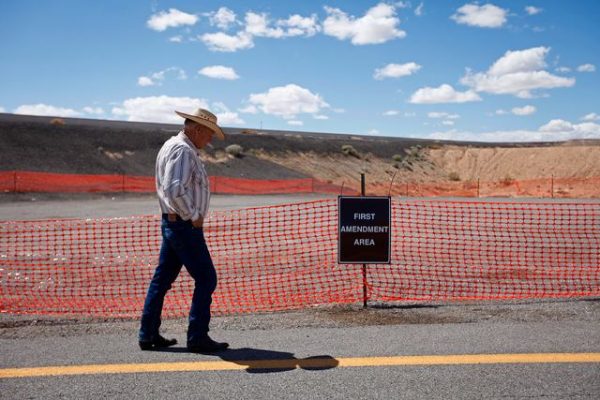 I’ve been hearing, seeing and getting involved a lot since the BLM take over of Cliven Bundy’s ranch and the confiscation of his property for not paying fees-which, by the way, he tried to pay.  He was refused because he was paying the fees to the county and not to their bogus administrative department, run by faceless, un-elected, non-oath-taking, goons who are appointed by the state to do what they want with lawlessness, immunity and impunity. The Bureau of Land Management (BLM)–the name tells you what they are supposed to do. Back in the 1800’s this agency would collect fees from the cowboys in a trust and use it to make any necessary repairs to the land. Nowadays, those days of managing…not so much.

News now is Harry Reid and the Chinese have been in cahoots for 2 years for Bundy’s property. It seems Harry is interested in having a solar project on that property and the underground of Bundy’s ranch is also rich with water, gas and oil…fracking companies are calling him too.

Bundy owns his land and pays for his own repairs, but the government has found an excuse to strong arm him into leaving and are exercising their bully power by insisting on a show of force with the use of hundreds of costumed brown shirts, snipers, vans, and even the setting up of little fenced off areas with signs that say first amendment area. You are allowed to exercise your 1st amendment rights only if you are penned up in these designated areas.

His son was even beaten and thrown in jail because he dared film outside of the gestapo designated pens. When Cliven tried to call 911 to find out where his son was they told him if he didn’t get off the phone he would be arrested and anybody from that day forward who called 911 was told the same thing. So, they pay taxes for police but are threatened with jail if they use 911 because the feds are trying to show that they’re the bosses. And the governor? the sheriff? someone? crickets.

All so that they can take his 900 cattle away.

Here is a letter written by Mr. Bundy’s daughter that explains the background:

I have had people ask me to explain my dad’s stance on this BLM fight.

My great grandpa bought the rights to the Bunkerville allotment back in 1887 around there. Then he sold them to my grandpa who then turned them over to my dad in 1972.

These men bought and paid for their rights to the range and also built waters, fences and roads to assure the survival of their cattle, all with their own money, not with tax dollars.
These rights to the land use is called preemptive rights.

Some where down the line, to keep the cows from over grazing, came the bureau of land management. They were supposed to assist the ranchers in the management of their ranges while the ranchers paid a yearly allotment which was to be use to pay the BLM wages and to help with repairs and improvements of the ranches.

My dad did pay his grazing fees for years to the BLM until they were no longer using his fees to help him and to improve.

Instead they began using these money’s against the ranchers.

They bought all the rest of the ranchers in the area out with their own grazing fees.

When they offered to buy my dad out for a penence he said no thanks and then fired them because they weren’t doing their job.

He quit paying the BLM but, tried giving his grazing fees to the county, which they turned down.

So my dad just went on running his ranch and making his own improvements with his own equipment and his own money, not taxes.

In essence the BLM was managing my dad out of business.

Well when buying him out didn’t work, they used the indangered species card.

Well that didn’t work either, so then began the threats and the court orders, which my dad has proven to be unlawful for all these years.

It’s come down to buying the brand inspector off and threatening the County Sheriff.

Everything they’re doing at this point is illegal and totally against the constitution of the United States of America.

Now you may be saying,” how sad, but what does this have to do with me?” Well, I’ll tell you.

They will get rid of Cliven Bundy, the last man standing on the Bunkerville allotment and then they will close all the roads so no one can ever go on it again.

Next, it’s Utah’s turn. Mark my words, Utah is next.

Then there’s the issue of the cattle that are at this moment being stolen. See even if dad hasn’t paid them, those cattle do belong to him.

Regardless where they are they are my fathers property. His herd has been part of that range for over a hundred years, long before the BLM even existed.

Now the Feds think they can just come in and remove them and sell them without a legal brand inspection or without my dad’s signature on it.

They think they can take them over two boarders, which is illegal, ask any trucker. Then they plan to take them to the Richfeild Auction and sell them.

All with our tax money.

They have paid off the contract cowboys and the auction owner as well as the Nevada brand inspector with our tax dollars.

I just received this information and am hoping this piece will get the attention of some Americans who stand with Cliven Bundy.

The Cattle are going to be transported to the Euclid Stockyard in California. It is scheduled for Monday and could be sooner than that. They are going to be auctioned Wednesday.

Folks, I ask that you spread this to the four corners of the internet! If you are in California, you will be of great asset on this one.

Euclid Stockyard Information is as follows:
Euclid Stockyards Inc
Address and phone redacted because of the cows being back in Bundy’s possession. -Ed