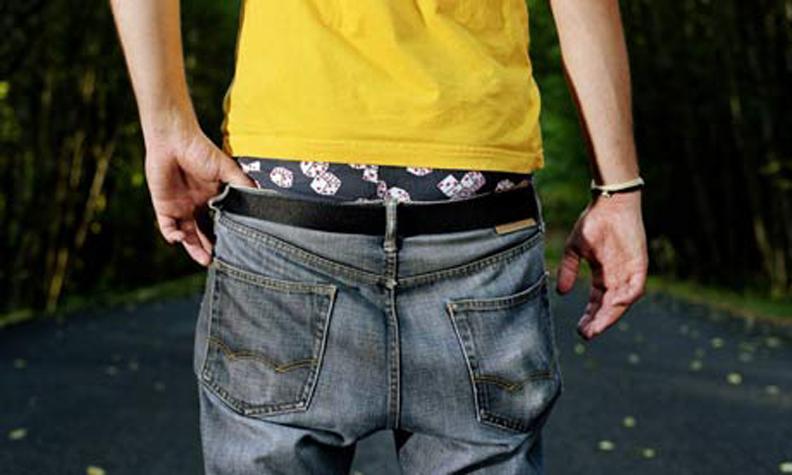 America has been duped into believing that Common Core State Standards are the panacea for all problems educational. Politicians and educational purveyors have sold America on the concept that Common Core will solve everything, that is, with just a little more money. And then a little more. And then a little more until all of the money is syphoned into supporting Common Core, an untried, un-researched program that has been rejected by the only actual educators that were part of the initial Common Core Validation Committee. And then, you must surrender the minds of your children to the political correctness of Common Core. However, the truth is that there are so many problems in education that need to be addressed before we can talk about reforms of actual academic standards that a discussion of Common Core State Standards is pointless. These diaries will try to uncover the serious problems that underlie our failing school systems. When we are willing to honestly address the serious problems in our schools and within our culture, then we can talk about academic standards. Until then, here follows an expose of the average urban classroom.

Standing outside my classroom today between class periods, I noticed an administrator walking past student after student violating the dress code: banned hoodies with hoods up, pants belted around boys’ thighs displaying their boxers and cracks of their behinds, pants that were anything but khaki, and bright pink or red sweaters when the only approved color is the school blue. Additionally many students in the hall had cell phones out and ear buds in. The administrator said nothing to anyone, but walked through the hall serenely exiting down the stairs.

I walked into my room to start class and glanced around. There was not one student in the room NOT in violation of the dress code.

During my planning period, I walked past a classroom where a new administrator, who was a teacher last year, was currently teaching one section of French. Her students were talking, wandering around the room, cell phones blatantly out, hoodies up, and little specific teaching was taking place. How will students take her seriously as an administrator when she is soft on discipline and structure in her own room?

There is a theory expounded in 1982 by social scientists James Q. Wilson and George L. Kelling that a broken window left unrepaired is likely to lead to more broken windows as is explained here:

“Consider a building with a few broken windows. If the windows are not repaired, the tendency is for vandals to break a few more windows. Eventually, they may even break into the building, and if it’s unoccupied, perhaps become squatters or light fires inside.

The equivalent of a broken window in schools is an unenforced rule.

Over the years I have spent much “emotional capital”, as expressed by one teacher, on trying to enforce the dress code in my schools. If it was a published policy chosen by the school administrators, I felt that it was my job to enforce it. In fact, I have been reminded repeatedly that it was my job. However, I have found year after year, school after school, that the administration is unwilling to enforce its own rules; therefore, parents feel no obligation to follow the rules and students constantly push against the rules as teens are wont to do.

In fact, I have been criticized for enforcing the dress code. One former administrator actually accused me of having a problem with black female sexuality because I tried to enforce the code that HE co-wrote. Fellow teachers often feel no obligation to enforce school rules or policies either. They don’t want to waste their “emotional capital”. Sadly, they do not realize that in saving their own emotional capital they are costing other teachers theirs and are destroying students’ ability to learn in a safe and predictable environment in the process.

Many adults involved with urban students, including administrators, parents, teachers, and especially politicians, argue that we cannot hold urban students accountable or expect them to follow rules of this kind. I say that they are profoundly mistaken. This attitude is deeply destructive to the learning environment. This is the lowered expectations of soft racism. This stance is exactly the opposite of what urban students, indeed of what any students, need to be successful.

Sometimes the argument is that urban students come from chaotic and unpredictable environments; therefore, we cannot hold them accountable to the normal standards. How is this outlook helpful to these students? It is not. It is also profoundly mistaken indeed. Students whose home or community lives may be unstable should be certain that school is a bastion of safety and predictability. They should know exactly what to expect when they walk in the door. Are they breaking a rule or are they not? Will the rules be applied to everyone or will some skate while others have the book thrown at them? Will the adults be adults and reassure them that the adults have control over the school?

Every day in every urban school in America, there are students who show up ready to learn, ready to follow rules, kids who are raised to be respectful, kids whose parents care for their future, yet every day these same students have their education stolen by a system that allows chaos in the schools. Even most of those students who cause the chaos would start to grow or even thrive in a stable school environment. School should be a haven, not just a continuation of disorder. That does not mean that zero tolerance attitudes should take over. There are children and parents who find themselves in difficult conditions in any school, but exceptions to any rule (and there should be exceptions at times) should be limited, individual, and private.

As Oscar Newman, in his 1972 book, Defensible Space states “The negligence of society towards any form of a ‘broken window’ signifies a lack of concern for the community” and “this is a clear sign that the society has accepted this disorder.” When schools fail to enforce their own rules, they communicate to students that the adults accept disorder. How can the students then feel safe? An atmosphere of fear pervades the schools, and fear leads to further disorder. As psychologist Dr. David Swanson stated in regard to raising children: safety first, future second, happiness third.

Children are not safe and cannot thrive when they live in a daily atmosphere of fear and disorder.

Eric Holder, our Attorney General, recently made the statement that black children should not be disciplined as much as children of other races even if those black children have clearly broken rules and laws. I was outraged. Because I am a white middle-aged woman, many people jump to racist conclusions about my outrage and assume that I really just want black children to be punished, but exactly the opposite is true. I want black children and all children to have a safe and engaging environment in which to learn. Instead of Mr. Holder’s uninformed and inexperienced suggestion that urban students be held less accountable than they currently are, they should be held reasonably accountable from the first day of school. The school to jail pipeline about which Mr. Holder professes to be so concerned would dry up to a trickle.

It is the nature of children to push against boundaries even though they really crave order and predictability. It is the job of adults to make clear the boundaries and to help children become fully functioning members of a civil society. When we abdicate this responsibility, we fail our children.

Dana R. Casey is a veteran high school English teacher of more than two decades in an East-coast urban system. She is a life-long student of theology, philosophy, and politics, dedicated to the true Liberalism of the Enlightenment, as defined by our Founders and enshrined in our Declaration of Independence, Constitution and Bill of Rights.