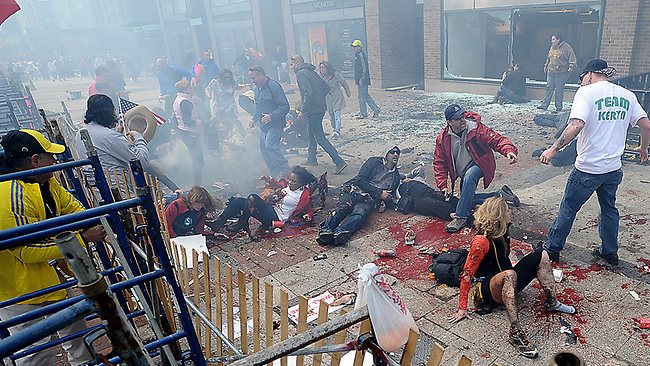 On the one-year anniversary of the jihad bombing of the Boston Marathon that caused multiple deaths, including  a little boy and a mom, and casualties in the hundreds, the New York Times is running  sympathy propaganda commiserating with the jihad filth Tsarnaev.

First line of the article: “He cannot mingle, speak or pray with other prisoners. His only visitors are his legal team, a mental health consultant and his immediate family, who apparently have seen him only rarely.” This holy warrior should have been sentenced to death by a military tribunal.

This is moral inversion. Sick and depraved, the NY Times has sunk to an altogether new low. Is it any wonder, their circulation is in the tank and sinking? These bastards deserve to go out of business.

Tsarnaev’s restrictions are designated for those who pose the greatest threat to others. But the NY Times poo poos that, because “there is little of substance to suggest that Mr. Tsarnaev, 20, and his brother Tamerlan were anything but isolated, homegrown terrorists.” So what? What difference does it make if they are waging jihad with a group? They blew up the Marathon, targeting thousands of families. They are part of the global jihad.

The NY Times has really gone over to the dark side. And they are not alone.

He cannot mingle, speak or pray with other prisoners. His only visitors are his legal team, a mental health consultant and his immediate family, who apparently have seen him only rarely.

He may write only one letter — three pages, double-sided — and place one telephone call each week, and only to his family. If he reads newspapers and magazines, they have been stripped of classified ads and letters to the editor, which the government deems potential vehicles for coded messages. He watches no television, listens to no radio. He ventures outside infrequently, and only to a single small open space.

It has been nearly a year since police officers found Dzhokhar Tsarnaev in a suburban Boston backyard, hiding in a boat there, wounded by gunfire. Today he passes time in a secure federal medical facility, awaiting a November trial on charges that he helped plan and execute the Boston Marathon bombing a year ago on Tuesday, which killed three people and wounded at least 260, and a killing and kidnapping spree that forced an entire city into lockdown. 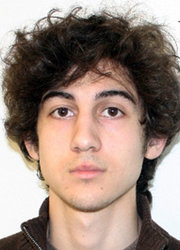 Now it is his turn to be effectively walled off from the outside world, imprisoned under so-called special administrative measures approved by the United States attorney general. The restrictions are reserved for inmates considered to pose the greatest threat to others — even though, privately, federal officials say there is little of substance to suggest that Mr. Tsarnaev, 20, and his brother Tamerlan were anything but isolated, homegrown terrorists. A court order bars his legal advisers and family from disclosing anything he has told or written them.

Court documents and a snippet of a phone conversation with his family, released before the measures were imposed, offer glimpses into his life. Last May, he told his parents in Dagestan that “everything is good,” that he was eating meals of chicken and rice and that supporters had deposited about $1,000 in a bank account set up on his behalf.

And he gets cards and letters: at least a thousand so far, many, his lawyers have written, from people urging him to convert to Christianity. But there are others as well, from admirers and backers who believe he is innocent.

Crystel Clary, a single mother in Wisconsin who turns 35 on Tuesday, is one of them. She says she has written Mr. Tsarnaev 10 times beginning a month after the April 15 bombing, offering moral support and news tidbits about such things as Eminem’s latest album and new movies. Prison authorities returned birthday and Valentine’s Day cards, she said, stating that she is not approved to write to Mr. Tsarnaev. Ms. Clary said that the letters had not been returned, and that she had not received any replies from Mr. Tsarnaev. Her Twitter account nevertheless features photographs of Dzhokhar Tsarnaev and Tamerlan, who was killed by the police during a manhunt for the two men.

“You can tell he didn’t do it,” she said. “There is too much suspicious stuff going on in this case.”

What happened in Boston last year was terrible and tragic but to now describe the emotional torture we are enforcing on guilty Tsarnaev is primitive at best.

In court documents, prosecutors appear to have amassed an arsenal of evidence from thousands of pages of documents and terabytes of digital information, including what they say is Mr. Tsarnaev’s hospital-bed confession and a call for others to wage holy war against Americans.

They are fodder for 30 criminal charges against him. Seventeen of them carry the death penalty. The federal court in Massachusetts, seldom accused of hurrying a case along, has given the two sides 19 months to prepare for a trial that the prosecution says could last three months.

UPDATE: The NY Times is not alone. Salon is working furiously to insure that this jihad murderer not get the death penalty.