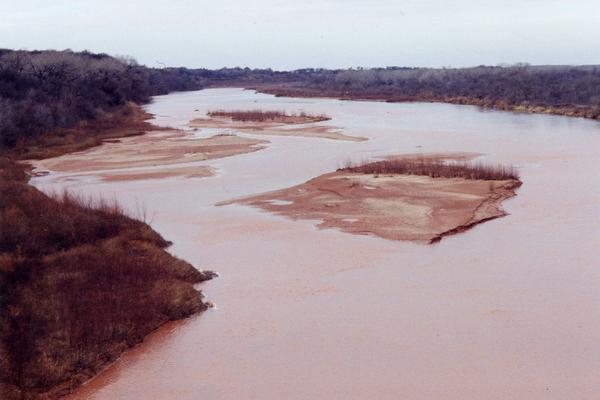 The story of Cliven Bundy has dominated the news, and admittedly my attention, for over a week now. But the history of the situation is not often discussed. Before Harry Reid and a Chinese energy company ever came into the picture, over 50 neighboring ranches were effectively “managed” out of business by the BLM and forced to sell. Bundy’s daughter reports that the BLM stopped making improvements, which are supposed to be the rationale behind the fees, and started buying out the neighbors. Now, Cliven Bundy is the last man standing in an area that used to be dominated by family ranches.

Is this agency really about “land management” or is it more about “land confiscation and procural?”

There are other stories emerging of BLM land grabs in Colorado and Texas and today I want to summarize what is happening along the Red River in Texas.

The Red River is the traditional border between Texas and Oklahoma. It is also home to many ranches, much like those in Nevada, that have been passed down through generations. Faye Higbee reports:

The Red River is the boundary between Texas and Oklahoma…or is it?

Byers, Texas along the Red River — The BLM stole 140 acres of the Tommy Henderson ranch thirty years ago. They took his land and paid him absolutely nothing. He sued and lost. Now the BLM is using that court case as precedent to do it again. The problem is, the land they want to seize is property that ranchers have a deed for and have paid taxes on for over a hundred years.

The BLM claims that about 90,000 acres (116 miles along the Red River) have never belonged to Texas in the first place. They will seize the land and it will seriously change the boundaries between the two states.

Think about what we just learned. This land should have never belonged to Texas in the first place? Think about that. Only the most serious crimes have no statute of limitations. The BLM wants to take the private property of families that have owned it, in some cases, for over a hundred years.

No crime has been committed. This is not the fault of the owners. Taxes have been paid and deeds have been issued.

Does this sound ethical to you?

As in the case with Bundy, legal and ethical are not always synonymous. We are living in a time of tyrants. They are perverting our laws to their liking and using them to advance their agenda with whatever means are necessary.

Since 1803 when the Louisiana Purchase was completed, there has been a controversy over the boundary between Oklahoma and Texas. The boundary is supposed to be the vegetation line on the south side of the Red River. But the River has moved over time. The problem is the definition of that boundary line- Oklahoma and Texas each use different semantics to define it. And the BLM is finding ways to use the disputed words to give them the ability to seize the land.

Open grazing of cattle has always been a common law right in America. It is time for the American people to rise up against the theft of private lands and property by a government that is out of control. Ranchers have contacted Texas Representative Mac Thornberry for assistance. We will monitor this situation as it progresses.

You can the entire story at Uncle Sam’s Misguided Children. I have also posted a short video below.

This is by no means an easy situation to deal with. However, it doesn’t appear in the spirit of justice for the BLM to simply take the land and offer no compensation as they did previously with the Henderson family. I’d rather see my tax dollars going to compensate a rancher than to see it buying weapons in Syria. What about you?

Cliven Bundy may have been the best thing to happen to America in many years. Whether he is an unconstitutional squatter as some believe, or an American hero as I believe, it does not matter in this context. He is shining some much needed light on the Bureau of Land Management. Suddenly stories like this Red River land grab, that are generally ignored by the national media, are becoming part of public awareness and as Faye suggests…

It is time for the American people to rise up against the theft of private lands and property by a government that is out of control.

I think that if we put our minds to it we might even find a few more reasons to rise up.

Yes America, the government is out of control.