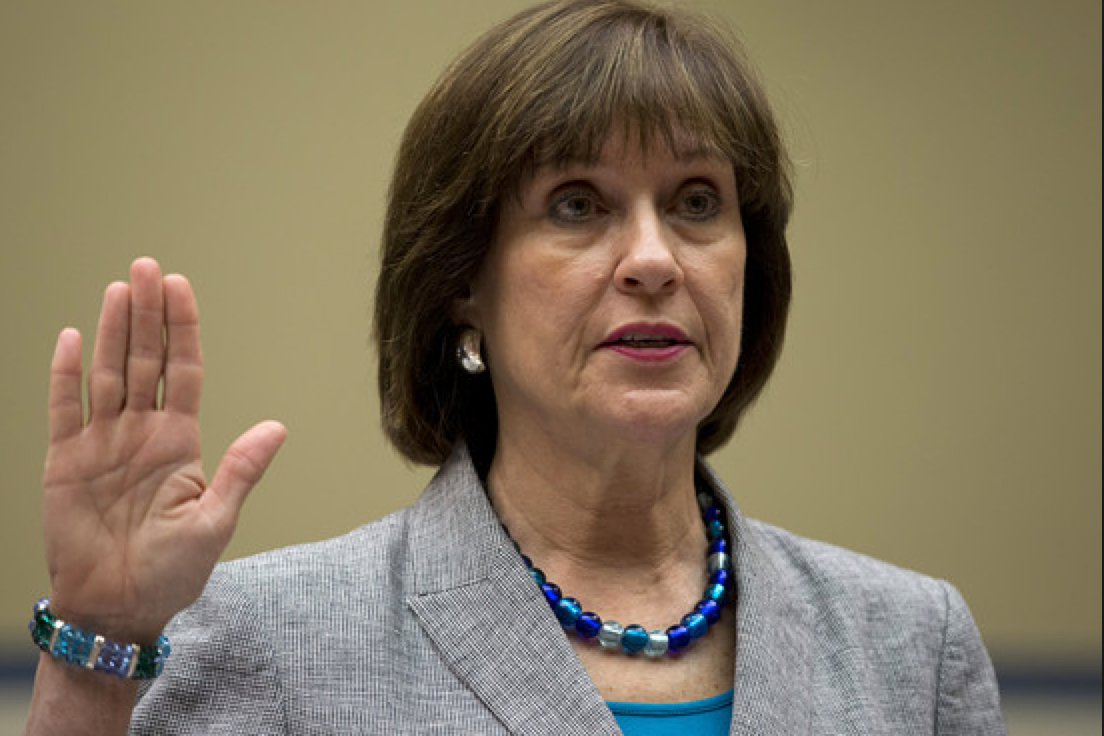 This is the latest bombshell to emerge from the recent cache of documents released to Judicial Watch under the Freedom of Information Act. First, it reveals what liars Obama’s appointees are. Secondly and more importantly, the fascist tactics employed by the Obama administration call for a mass purge of the government.

The idea that the tyrannical Obama government meant to prosecute political speech using the most powerful government agency in the United States is terrifying and treasonous. Treason not by one, but by Obama’s fifth column. And the enemedia’s cover and complicit silence is a declaration of war on the America people.

“These new emails show that the day before she broke the news of the IRS scandal, Lois Lerner was talking to a top Obama Justice Department official about whether the DOJ could prosecute the very same organizations that the IRS had already improperly targeted”

We are under siege by the Democrat party.

Democrats in Congress were involved. Rep. Elijah Cummings (D-MD) appears to have led the anti-constitutional attack on free speech in the House. Sen. Sheldon Whitehouse (D-RI) led it from the Senate.

Get to work, volunteers. Support principled candidates — get out the vote.

May 9, 2013, email reveals IRS plans to meet with Department of Justice over whether to prosecute groups that “lied” about plans for political activity

(Washington, DC) – Judicial Watch today released a new batch of internal IRS documents revealing that former IRS official Lois Lerner communicated with the Department of Justice (DOJ) about whether it was possible to criminally prosecute certain tax-exempt entities. The documents were obtained as a result of an October 2013 Judicial Watch Freedom of Information Act (FOIA) lawsuit filed against the Internal Revenue Service (IRS) after the agency refused to respond to four FOIA requests dating back to May 2013.

I got a call today from Richard Pilger Director Elections Crimes Branch at DOJ … He wanted to know who at IRS the DOJ folk s [sic] could talk to about Sen. Whitehouse idea at the hearing that DOJ could piece together false statement cases about applicants who “lied” on their 1024s –saying they weren’t planning on doing political activity, and then turning around and making large visible political expenditures. DOJ is feeling like it needs to respond, but want to talk to the right folks at IRS to see whether there are impediments from our side and what, if any damage this might do to IRS programs.

I think we should do it – also need to include CI [Criminal Investigation Division], which we can help coordinate. Also, we need to reach out to FEC. Does it make sense to consider including them in this or keep it separate?

Lerner then “handed off” scheduling the issue to Senior Technical Adviser, Attorney Nancy Marks, who was then supposed to set up the meeting with the DOJ.  Lerner also decided that it would be DOJ’s decision as to whether representatives from the Federal Election Commission would attend.

Democratic Rhode Island Senator Sheldon Whitehouse had held a hearing on April 9 during which, “in questioning the witnesses from DOJ and IRS, Whitehouse asked why they have not prosecuted 501(c)(4) groups that have seemingly made false statements about their political activities.”  Lerner described the impetus for this hearing in a March 27, 2013, email to top IRS staff:

As I mentioned yesterday — there are several groups of folks from the FEC world that are pushing tax fraud prosecution for c4s who report they are not conducting political activity when they are (or these folks think they are). One is my ex-boss Larry Noble (former General Counsel at the FEC), who is now president of Americans for Campaign Reform. This is their latest push to shut these down. One IRS prosecution would make an impact and they wouldn’t feel so comfortable doing the stuff.

So, don’t be fooled about how this is being articulated – it is ALL about 501(c)(4) orgs and political activity

But in an email sent a few minutes earlier, Lerner acknowledged prosecutions would evidently be at odds with the law:

Whether there was a false statement or fraud regarding an [sic] description of an alleged political expenditure that doesn’t say vote for or vote against is not realistic under current law. Everyone is looking for a magic bullet or scapegoat — there isn’t one. The law in this area is just hard.

The documents also include email exchanges showing that before Lerner’s May 10, 2013, speech to the American Bar Association blaming “low-level” employees in Cincinnati for targeting tax-exempt organizations, the IRS Exempt Organizations division was scrambling to defuse the emerging targeting scandal:

The new documents obtained by Judicial Watch also include emails exchanged after Lerner’s May 10 ABA speech:

The Judicial Watch FOIA requests came on the heels of an explosive May 14, 2013, Treasury Inspector General report revealing that the IRS had singled out groups with conservative-sounding terms such as “patriot” and “Tea Party” in their titles when applying for tax-exempt status. The IG probe determined that “Early in Calendar Year 2010, the IRS began using inappropriate criteria to identify organizations applying for tax-exempt status to (e.g., lists of past and future donors).” According to the report, the illegal IRS reviews continued for more than 18 months and “delayed processing of targeted groups’ applications” preparing for the 2012 presidential election.

Lerner, who headed the IRS division that handles applications for tax-exempt status, refused to testify at a May 2013 hearing before Rep. Darrell Issa’s (R-CA) House Oversight Committee, demanding immunity concerning her role in the targeting scandal. Lerner retired from the IRS with full benefits on September 23 after an internal investigation found she was guilty of “neglect of duties” and was going to call for her ouster, according to news reports. On April 9, 2014, the Ways and Means Committee referred Lois Lerner to the DOJ for criminal prosecution. On April 10, 2014, the House Oversight Committee voted to hold Lerner in contempt of Congress.

“These new emails show that the day before she broke the news of the IRS scandal, Lois Lerner was talking to a top Obama Justice Department official about whether the DOJ could prosecute the very same organizations that the IRS had already improperly targeted,” said Judicial Watch President Tom Fitton. “The IRS emails show Eric Holder’s Department of Justice is now implicated and conflicted in the IRS scandal.  No wonder we had to sue in federal court to get these documents.”

Writing at PJ Media, Bryan Preston well summarizes the implications of this horrifying scandal that makes Nixon look like a shoplifter at the Dollar Store. (thanks to Bad Blue) 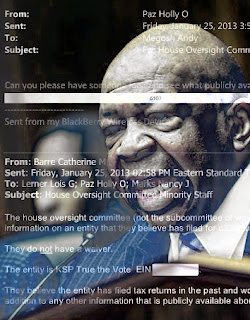 The implications of today’s email disclosure are stunning and terrifying.

Lois Lerner intended to use her position atop the IRS’ tax exempt approval office to coordinate the prosecution of political speech. The Department of Justice under Attorney General Eric Holder had at least tentatively bought into that. The Federal Elections Commission was being roped in as well. Lerner’s emails prove that beyond doubt.

Democrats in Congress were involved. Rep. Elijah Cummings (D-MD) appears to have led the anti-constitutional attack on free speech in the House. Sen. Sheldon Whitehouse (D-RI) led it from the Senate.

Two days before Lerner was forced to publicly disclose the scandal, she was moving forward with an insidious plan to stamp out conservatives and Tea Party activists’ ability to organize and raise money, by working with the IRS commissioner’s office and the Department of Justice. At the same time, there was no plan for any government crackdown on groups who agreed with President Obama. The traffic was entirely one-way. It was nakedly political, and everyone involved knew it. They also had reason to believe that they would succeed, or they would not have engaged in it. DOJ would serve two roles: Prosecute conservatives, and protect the bureaucrats who were pushing those prosecutions.

Any conservative who sits on the sidelines in 2014 bemoaning candidates that aren’t to his or her liking is effectively a co-conspirator with the Democrats in the active destruction of this Republic.

We have a President, an Attorney General, a ranking member of the House Oversight Committee, the IRS, the FBI, and heaven knows what other alphabet soup agencies conspiring to jail political opponents. Kind of like Venezuela, but with more debt.

That, my friends, is fascism, straight up.

So when you sit out the next election because you couldn’t find the perfect Republican candidate, don’t act surprised when this corrupt, lawless, totalitarian Democrat Party comes after you and your group.

So you can mobilize to stop this, or you can echo Alexander Solzhenitsyn in his masterful The Gulag Archipelago. It related to the greatest regret of those in the slave labor camps:

What would things have been like if every Security operative, when he went out at night to make an arrest, had been uncertain whether he would return alive and had to say good-bye to his family? Or if, during periods of mass arrests, as for example in Leningrad, when they arrested a quarter of the entire city, people had not simply sat there in their lairs, paling with terror at every bang of the downstairs door and at every step on the staircase, but had understood they had nothing left to lose and had boldly set up in the downstairs hall an ambush of half a dozen people with axes, hammers, pokers, or whatever else was at hand? –Part I The Prison Industry, Ch. 1 “Arrest” (p13, The Gulag Archipelago, Collins 1974)

The radicals in the Obama administration today attack us confident that the Republican “leadership” will do nothing to stop them. That is why the lesson of Cliven Bundy is so crucial: Democrats must be reminded at each turn that their safety will vanish if they turn to violence. 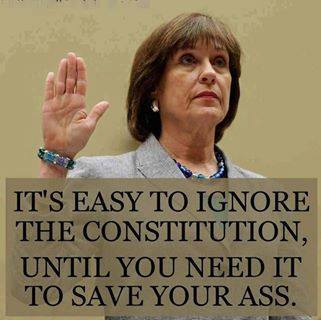