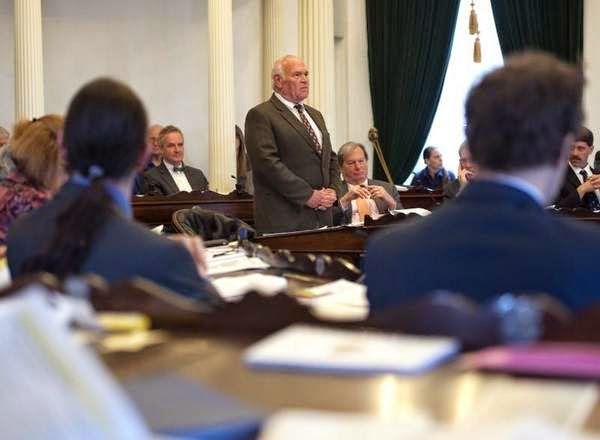 We are saying people have a right to know what’s in their food.

On Tuesday, the Vermont Senate cast its votes for a bill that would require GMO labels on food products.Campbell and other bill supporters believe the bill is legally airtight. Nevertheless, they carved out a fund for legalities, such as if food producers who are sure to dislike the bill decide to sue.A vote of 26-2, however, demonstrates a great desire from the Senate and its constituents for labels bearing GMO knowledge, beginning in July 2016.

Wednesday marks the day it goes back for a vote before going to the House, and Governor Peter Shumlin has shown signs of the likelihood of signing.Other states like Connecticut and Maine passed laws; but, similar to Vermont, are delaying implementing until more states join in to allow time and protection from being sued. In case you were wondering why labeling efforts take so long once they pass.When Sen. David Zuckerman, P/D-Chittenden introduced the bill on the floor, he noted questionable safety of GMO foods because the FDA relies on testing done by biotech companies and food producers – not independent, impartial sources. The two opposing voters mainly expressed concerns of legal expenses, noting the time they had trouble after requiring milk labels telling consumers about bovine growth hormones. Senators on the fence were persuaded by Vermont residents who expressed a desire to have more food transparency and flooded them with emails and calls. Consumer polls and surveys have shown that the majority of Americans would rather have GMOs listed on the label, than not. Also a concern, is that 60 other countries have either enacted GMO bans or labeling laws and GMOs appear in the vast majority of store foods, as they dominate North American soy, corn and canola crops.Some farmers were upset because they view the label as pointless, saying, “This labeling bill will not tell them anything other than ‘GMO something.’” But also view it as a way to alarm consumers, fail to educate them and claim the nutritional value is the same. Well, Sen. Joe Benning, R-Caledonia, took that same argument and turned it on its head, saying a label can inform people how many carbohydrates there are without declaring that they are evil.He added:

I know what carbohydrates can do to my body. Some people in this room that’s exactly how they feel about GMOs.

And he’d be right if you consider the amount of people who wish to exclude GMOs for allergenic, immune system and inflammation concerns. Since independent testing of patented crops is nearly impossible to gain permission to do, groups like the Institute for Responsible Technology have demonstrated information from doctors and dietitians reporting disease reversal for their patients who completely remove GMOs from their diets.State initiatives like these and around 20 others may fall prey to a new federal bill just introduced, that could banish all state efforts to label GMOs. The Safe and Accurate Food Labeling Act of 2014 is being called the DARK Act by opponents because it would ban state measures to label and defer to the FDA – who relies solely on the word of Big Biotech.Source:http://www.burlingtonfreepress.com/article/20140415/NEWS03/304150009/-1/rssHeather Callaghan is a natural health blogger and food freedom activist. You can see her work at NaturalBlaze.com and ActivistPost.com. Like at Facebook.