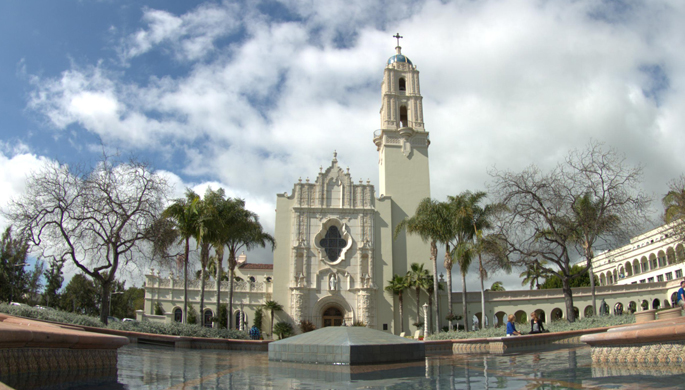 Catholic universities in the United States regularly sponsor not just non-Christian, but downright anti-Catholic, speakers and events, including pro-abortionists.

But the University of San Diego (USD) in southern California has gone even further with a drag show a week ago “starring” a transvestite-sodomite-satanist.

Despite the pronouncement of the Vatican’s Congregation for Education that its two prior drag shows were a scandal, USD held its third drag show on Thursday, April 10.

The master of ceremonies for the event was the local professional transvestite/drag queen Tootie Nefertootie (below). His website reveals him to be a gay activist who aggressively promotes same-sex marriage.

For his last diabolical selection of the evening, Tootie lip-synced the lyrics from the song “Good N’ Evil” by Linda Eder:

Good and evil –
And their merits –
Men have argued through history –
As well they should!
My philosophy
Any child can see –
“Good is evil –
And therefore
All evil is good”

Tootie stripped off the black robe but kept on the goat-horned headdress with a skimpy outfit. The headdress resembles the satanic symbol Baphomet, usually portrayed as a half-human and half-goat figure. The goat-horned image of Baphomet is the symbol for the Church of Satan.

The day following the drag show, during his Friday morning Mass at Casa Santa Marta, Pope Francis warned us that the Devil still exists and that he [the Devil] doesn’t want anyone to follow Christ. Also, in another speech on Friday, April 11, Pope Francis recognized the importance of gender when he made the following statement: “it is necessary to reaffirm the right of children to grow up in a family, with a father and a mother capable of creating an ideal environment for their development and emotional maturity.”

An article from the official Vatican News Service, Zenit, entitled “Gender Is Not A Choice”, illustrates some of the problems that result when society accepts the position that gender is malleable.

The drag show concluded with a student representative of  USD Gay Pride thanking  “the school for letting this happen…[because]…as you know some people may find this conversation uncomfortable…[however]…this is a testament to our…Catholic identity and our mission and values as a Catholic school to promote diversity and inclusion.”

The USD officials present at the drag show (some of whom participated as speakers and judges), again publicly maintained the university’s party line that the Catholic Church actually endorses “gender nonconformity”.  Donors listed at the bottom of the program include Urban Mo’s, part of Mo’s Universe, which is a group of gay restaurants and bars in Hillcrest.

The president of the U. of San Diego is Mary E. Lyons, Ph.D. Here’s her contact info:

The bishop of the Diocese of San Diego is Cirilo Flores, D.D., J.D. Here’s his contact info: