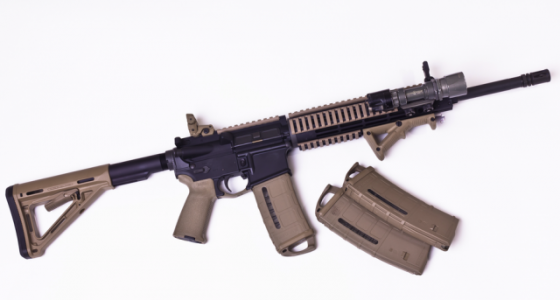 In what is believed to be the first arrest in Connecticut under the new unconstitutional laws signed by Governor Malloy in December, a 65-year-old Milford man was arrested after he allegedly shot at a squirrel in his yard on Monday morning.

James Toigo now faces numerous charges following the alleged shooting. According to Officer Jeffrey Nielsen, those charges are as following:

In case you were wondering, no, it wasn’t a neighbor that called the police on Toigo. According to the New Haven Register:

Police officers were directing traffic in the area of Housatonic Drive when they heard a gunshot nearby, according to the release.

Upon investigation, Toigo was taken into custody after police said he shot the squirrel.

Police said they also found an unregistered assault rifle, as well as three large-capacity magazines, in Toigo’s home. Both the firearms and the magazines were taken, the release said.

Officer Nielsen was not available to provide an answer, but Freedom Outpost did leave a message should he return the call, we will provide his statement as an update to the article.

Toigo was arrested and his guns, along with his semi-automatic rifle and three large capacity magazines were seized.

“As the investigation progressed the officers seized several firearms from the home for safe keeping,” Nielsen said. “That included the assault rifle and the three high capacity magazine he did not have registered.”

Again, Officer Nielsen needs to understand what an assault rifle is. This would be helpful when you are actually charging someone with possession of such an item.

Furthermore, Nielsen did tell the Register that he believed the majority of guns were registered. However, though he believes that, the police department is keeping all of Toigo’s guns in their possession until his hearing on May 13, 2014.

In any event, Nielsen said that Toigo will have to petition the police department to have his guns returned.

Hmmm. So if he were to win the case flat out, he would still have to petition the police to get his guns? They wouldn’t just automatically be returned to him? That seems very out of place. However, what I find most disturbing was that the police went into his home, presumably without a warrant and took all of his guns, even though he used one that didn’t fall under Connecticut’s new ex post facto laws. You see? Gun Control is really all about gun confiscation, and don’t let anyone tell you any different.