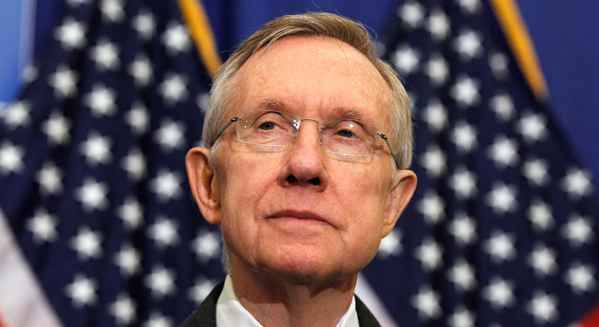 I have to hand it to Senate Majority Leader Harry Reid (D-NV), at least on this one statement, he got it right. Yes, Patriots showed up in Bunkerville to help protest the Bureau of Land Management’s land grab and protect Cliven Bundy and his ranch, and yes, it’s a sign that Harry Reid, Democrats and tyranny are all in big trouble.

Appearing on KSNV’s What’s Your Point?, Reid berated the Bundy family and protesters saying, “If anyone thinks by any figment of their imagination that what happened up there last week was just people rallying to somebody that was oppressed, 600 people came in armed. They had practiced. They had maneuvered.”

“If there ever was an example of people who were domestic violent terrorist wannabes, these are the guys, and I think that we should call it that way,” Reid concluded. “We have a situation that is really untoward.”

Obviously Harry Reid would have opposed the Founding Fathers in their struggle against tyranny. They met the tyrannical government of their day with arms, and they not only bore their arms, but they used them against the aggressors.

Reid was then rebuked by Senator Dean Heller (R-NV). He said, “What Senator Reid may call domestic terrorists, I call patriots. We have a very different view on this.”

“It’s a pretty broad brush when you have boy scouts there. You have veterans at the event. You have grandparents at the event. And these are people who, as long as they’re not promoting violence, in my opinion…” said Heller as Reid interrupted with disgust.

“Promoting violence?” Reid interjected. “There were sniper rifles. Talk to Sheriff Gillespie – automatic weapons. That’s grandmothers? That’s boy scouts? I hope not, because we got more problems with boy scouts than whether they can have gay leaders, if that’s the case.”

Reid wants to hide the fact that snipers were from the federal government pointing their weapons at unarmed protesters and the Bundy family.

Senator Heller said that he took “more issue with BLM coming in with a military army of individuals with snipers. I was talking to individuals at the event, and to have your own government with sniper lenses on you – it made a lot of people very uncomfortable.”

Senator Heller told the hosts of the show that he would be calling for hearings on Capitol Hill to see why the situation was handled in the thuggish manner that it was.

Of course, Harry Reid appealed to the criminal element in Washington, namely Attorney General Eric Holder, along with Clark County Sheriff Douglas Gillespie,
Secretary of the Interior Sally Jewell and FBI chief James Comey as to what should be done.

As far as I’m concerned, we should be thinking of what should be done to eliminate huge sections of the tyrannical federal government and all those such as Senator Harry Reid, who applaud the heavy handed measures of the BLM against American citizens who have not committed a crime, but will push legislation that is unlawful and unconstitutional for criminal illegal aliens to come into the country and provide them with the fruit of America’s labors, as well as citizenship.