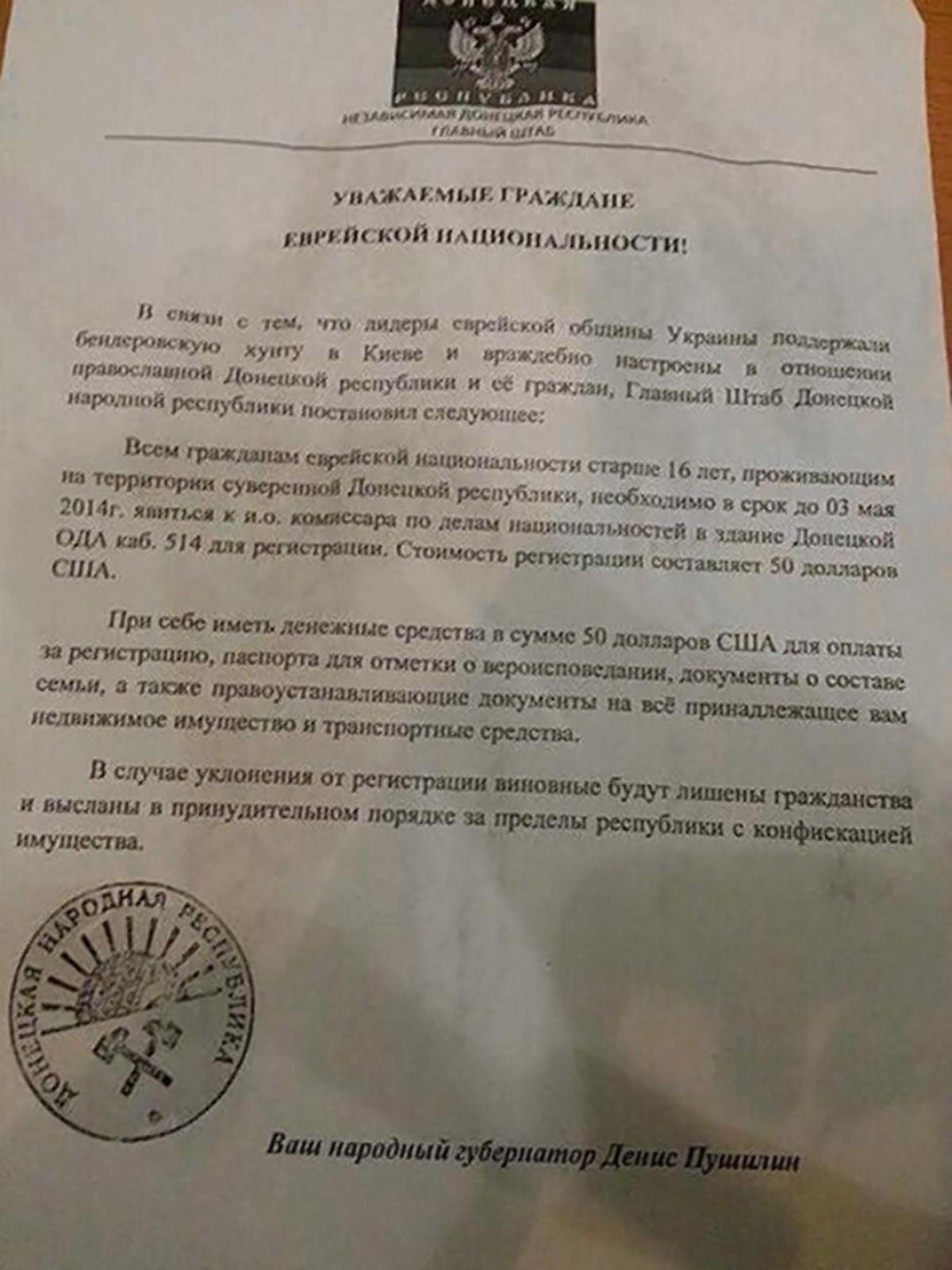 Just days after flyers were reported sent to Jews, demanding that they “register” in the Ukraine or face deportation, a Ukranian synagogue has been firebombed. There were no reported casualties, but the incident has sent shocks through a region already reeling from the reported Nazi-like distribution of flyers demanding that Jews identify themselves. Jewish identification allegations have been denied by pro-Russian forces in the area, with one saying, “TNR‘s Russian-American reporter Julia Ioffe concludes, ‘the Jews of Donetsk and eastern Ukraine may have been asked by a leaflet to register, but it has not been enforced nor are any Ukrainian Jews registering themselves.'” But there is no iron clad proof the incident did not happen, or that Jews in the Ukraine are not in a precarious position. They were in 1941 and they remain so today. But the firebombing of a Ukranian synagogue in Nikolayev is further proof of the rabid anti-Semitism in the region.

The video of the Ukrainian synagogue firebombing is chilling. An attack in the middle of the night, is deliberate provocation for Jews living in the area. With the Hitleresque flyer that reportedly circulated this past week, this is but one more painful incident. It is proof of the precarious position Jews in the Ukraine have been put

in. Their safety is in question. Any legitimate claim that someone did not deliberately distribute the flyers telling Jews to register or face deportation is put into question. When a Ukranian synagogue is firebombed after such a horrific incident, something foul and evil is surely happening in the Ukraine.

The main synagogue in the Ukrainian city of Nikolayev reportedly was firebombed.

The synagogue was empty of worshippers when it was firebombed early Saturday morning, according to the Chabad-affiliated Shturem.org website.

The attack was recorded by the Ukranian synagogue’s closed circuit security camera. Hopefully, the camera footage will lead to the arrest of the perpatrators. The attack happened at 2 a.m. Saturday morning, and there are no shortage of possible suspects. Where to start in a region so tainted by virulent ant-Semitism?

The footage was posted by Yisroel Gotlieb, son of the city’s chief rabbi, Sholom Gotlieb.

One firebomb was thrown at the door of the synagogue, which was unoccupied at the time, and another was lobbed at a window, according to the blog.

Tomim Yisroelik Gottleib, son of Shliach Rabbi Sholom Gottleib, told Shturem that miraculously a person passing by the shul was equipped with a fire extinguisher, and immediately putout the fire that had erupted, preventing massive damage.

If the passerby had not been in the right place at the right time, the Ukranian synagogue could have been destroyed. In February 2014, the Giymat Rosa Synagogue, in Zaporizhia, southeast of Kiev was also firebombed. At the time a statement was issued, saying, “Jewish religious officials have expressed concern that law enforcement’s preoccupation with the political turmoil and rioting would leave Jewish institutions exposed to violent forms of anti-Semitism.” The damage to this synagogue was mostly cosmetic, and the perpetrators were also caught on security cameras. But none the less what the officials said at the time has come to pass. The political turmoil in the Ukraine has left Jewish institutions exposed to violent anti-Semitic attacks.

Reports of rising anti-Semitism in the Ukraine after Russia’s recent occupation of Crimea were highlighted last week when fliers, reminiscent of the pogroms of a century ago, were distributed outside of a synagogue on Passover. The origin of the fliers is yet unknown, and debate has focused on whether they were from Russian or Ukrainian groups, from officials or designed to appear so, or if they were intended as some kind of a KGB-style subterfuge created to use anti-Semitism as a lever in the conflict.

The fliers, distributed in Donetsk, were addressed to “Ukraine nationals of Jewish nationality,” alerting Jews to pay a fee to register their names on a list and to show documentation of property ownership, or face deportation.

Regardless of who distributed the fliers, the situation in the Ukraine is perilous for Jews. Hitler is rising again, and Nazism is rearing it’s disgusting head. In all of Europe, the plight of Jews is frightening. Thought the media will not report it, the days of Jews experiencing any safety in Europe is over. In June 2013, as reported by Frontpage magazine, “Dr. Dov Maimon of the Jerusalem-based Jewish People Policy Planning Institute paints a bleak picture for European Jewry. As Maimon puts it delicately, “European Jewish life has quite possibly reached a negative inflexion point.”

The days of a fruitful and peaceful existence in Europe is over for Jewish citizens. Sickeningly, Satan’s minions from Hell have come to wreak havoc in the region. That means the freedom of religion for Jewish citizens is a distant memory.