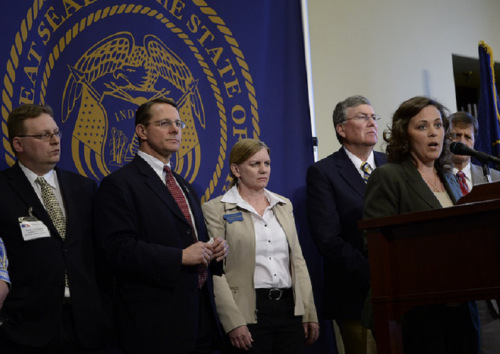 On Friday, lawmakers from 9 western states gathered in Utah to have joint talks about taking control of federal lands within their borders. More than 50 political leaders, including lawmakers and county commissioners, convened at the Legislative Summit on the Transfer for Public Lands to speak about a common goal: wresting control of lands within their states, rich with oil, timber and minerals from the federal government.

The move comes in the shadow of the Bureau of Land Management’s standoff in Nevada against Cliven Bundy. However, the summit was planned long before what took place in the past couple of weeks.

The summit was organized by Rep. Ken Ivory (R-West Jordan) and Montana state Senator Jennifer Fielder. Even US Senator Mike Lee (R-UT) was in attendance and addressed the group over lunch.

According to the Salt Lake Tribune:

Fielder, who described herself as “just a person who lives in the woods,” said federal land management is hamstrung by bad policies, politicized science and severe federal budget cuts.

“Those of us who live in the rural areas know how to take care of lands,” Fielder said, who lives in the northwestern Montana town of Thompson Falls.

“We have to start managing these lands. It’s the right thing to do for our people, for our environment, for our economy and for our freedoms,” Fielder said.

The intent was never to take over national parks and wilderness created by an act of Congress Lockhart said. “We are not interested in having control of every acre,” she said. “There are lands that are off the table that rightly have been designated by the federal government.”

A study is underway at the University of Utah to analyze how Utah could manage the land now in federal control. That was called for in HB142, passed by the 2013 Utah Legislature.

“Utah has been way ahead on this,” Fielder said.

Fielder is correct. Utah has led the way in its demands for the federal government to turn over lands that it owns to the state. She also said five task forces or other analyses were underway to get a handle on costs and benefits.

Idaho Speaker of the House Scott Bedke echoed Fielders comments, stating, “It’s time the states in the West come of age,” Bedke said. “We’re every bit as capable of managing the lands in our boundaries as the states east of Colorado.”

Nevada has tried to gain control of their own land several times. Lawmakers passed Senate Joint Resolution 27, which concluded: “RESOLVED, That the Legislature of the State of Nevada hereby urges the Congress of the United States to consent to the amendment of the ordinance of the Nevada constitution to remove the disclaimer concerning the right of the Federal Government to sole and entire disposition of the unappropriated public lands in Nevada …”

There is a video that sums up why the Western States would want to do this, even before the BLM’s dangerous fiasco at the Bundy Ranch. It has an appeal in it so we are in effect giving a free ad away, because the info in the video is short and highly informative.

The Constitution is clear about federal government control of land. According to Article I, Section 8:

To exercise exclusive legislation in all cases whatsoever, over such District (not exceeding ten miles square) as may, by cession of particular states, and the acceptance of Congress, become the seat of the government of the United States, and to exercise like authority over all places purchased by the consent of the legislature of the state in which the same shall be, for the erection of forts, magazines, arsenals, dockyards, and other needful buildings;

As for Cliven Bundy, the Bureau of Land Management has not actually taken him to criminal court. In fact, a spokesman for BLM told Prairie County Commissioner Todd Devlin that they thought Bundy may have prescriptive rights to the land he is grazing his cattle on. According to Devlin, that is why the BLM won’t take him to court.

While Dr. Ron Paul has pointed out the serious nature of bringing armed federal agents and declaring a no fly zone over the ranch area is characteristic of authoritarianism, Dr. Joel McDurmon has rightly pointed out the root of the problem, and that is publicly owned land. Where should we draw the line at state or federal owned land? Why not have all land in the hands of private citizens? I’m for states’ rights, but at the same time, and land owned by states or the federal government should be none at best or minimal at worst.

For more on the issue of federal controlled land and its impact on the states and economy, check out American Land Council.