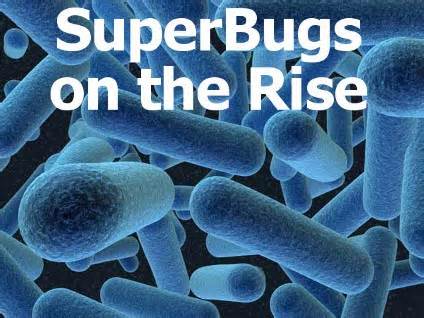 Bacteria increasingly are becoming resistant to antibiotics as a result of indiscriminate over-prescription of antibiotics as well as the misuse of antibiotics in the food given to corporate food animal factories. (Note: Antibiotics are useless against viral infection like the common cold.)

Already, there is a strain of bacteria that is resistant to the strongest antibiotics which appeared in hospitals. Now, this bacteria has moved beyond the hospital environment to U.S. homes.

Benjamin Fearnow reports for CBS Atlanta, April 22, 2014, that the anti-biotic resistant “superbug,” Methicillin-resistant Staphylococcus aureus (MRSA), is resistant to many of the strongest antibiotics.

Although recent prevalence has been limited to hospitals and nursing homes, a new study of 161 New York City residents who contracted the MRSA infections finds that the these people’s homes were “major reservoirs” for the bacteria strains, HealthDay reports.

The Centers for Disease Control and Prevention (CDC) notes that in communities outside of health care settings, most MRSA strains are skin infections that are spread by physical contact, such as the sharing of towels or razors. Athletes, military barracks, prisons and other close-quarter living areas are at an increased risk of contracting and spreading the bug.

But the new study shows that the MRSA has spread into average U.S. homes.

“What our findings show is it’s also endemic in households,” lead researcher Dr. Anne-Catrin Uhlemann, of Columbia University Medical Center in New York City, tells HealthDay, from the study published in the Proceedings for the National Academy of Sciences.

According to a report released by the CDC last September, more than 2 million Americans get drug-resistant infections each year. And about 23,000 die from these diseases that are increasingly resistant to the strongest antibiotics that doctors use to fight the infections.

Ultimately, the research showed that many homes outside of just those affected by MRSA were “major reservoirs” for the MRSA strain, USA300, which HealthDay notes is the primary cause of MRSA infections in communities throughout the country.

Bedding, clothes and other everyday surfaces used by someone affected by MRSA are suggested to be cleaned by bleach and hot water, although Uhlemann says the role of surfaces in transmitting the disease is not “well delineated.”

“We can’t just treat the person with the infection,” Uhlemann told HealthDay. “We have to attempt to remove the (MRSA) colonization from the home,” and another MRSA expert not involved in the study added that the new study “confirms what we’ve suspected all along.”

Correct bandaging, protection of wounds, and hand-washing were suggested by experts as the best ways to protect family members and others whom one may come in physical contact with regularly, thereby spreading the bacteria to others.

The CDC has estimated that nearly one-in-three people carry staph bacteria in their nose, and typically feel no symptoms of sickness. About 2 percent of people carry MRSA.

The World Health Organization has previously stated that the overuse of antibiotics has become so common that even normal infections may become deadly in the future, due to the evolution of these bacteria strains.

“It is not too late,” CDC director Dr. Tom Frieden said to CBSNews.com during a press conference. “If we’re not careful, the medicine chest will be empty when we go there to look for a lifesaving antibiotic for someone with a deadly infection. If we act now, we can preserve these medications while we continue to work on lifesaving medications.”

Dr. Henry Chambers, chair of the antimicrobial resistance committee for the Infectious Diseases Society of America, told HealthDay he agreed, and that “about half of antibiotics prescribed aren’t needed.”

A report earlier this month found that the drug-resistant bacteria caused a fatal blood infection in a Brazilian patient, according to Live Science. His body had developed a resistance to the powerful antibiotic vancomycin – used widely to treat the infection – during the course of his stay at the hospital.