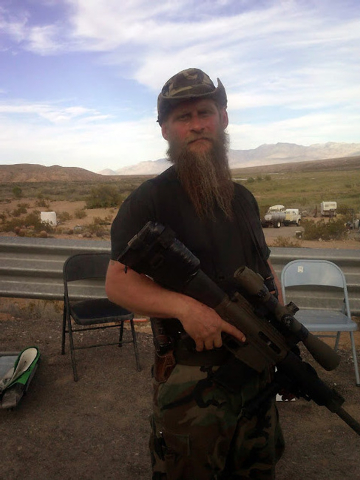 A week ago I got involved in a conversation with several of my Facebook Friends. We were discussing the possibility of the feds infiltrating the protest and militia crowd at the Bundy Ranch. The general consensus was that it was simply common sense. Of course they would attempt to do that if they had not already.

There is a distinct possibility that these militias were infiltrated long ago. It may not have happened this month.  Why wouldn’t the federal government try to infiltrate groups, if it felt those groups posed a threat? The government has called us “potential terrorists” for some time and we have now been labeled domestic terrorists that finally fulfilled our potential. It feels great doesn’t it?

Of course they would have tried to infiltrate. Chances are that while the BLM/Cliven Bundy situation developed they might have simply tried to reinforce what was already in place. If there are not feds on the inside I would be very surprised.

One man, among the self-described militia, says at least two federal agents went undercover to gather information and are preparing to make arrests. This latest information is causing increased tensions among those who say their goal is to protect rancher Cliven Bundy. Around 50 people remain at the ranch, many living in tents, and are prepared to stay for weeks, even months. The men say they took an oath to protect, but they are worried there is a rat in the ranks.“When you pledge your life and your fortune, you’re prepared to give it up,” said Bobby Bridgewater, an Oath Keeper.

An atmosphere of uncertainty now surrounds the Bundy ranch. The so-called security guards aren’t sure, but they believe it’s possible federal agents are among them, posing as militia.

“You don’t know until you actually catch somebody,” Bridgewater said. “It is always something that we’re always thinking about.”

Whether it is paranoia or common sense depends on who you are talking to but, again, I believe this is a completely valid concern. Sheriff Richard Mack, in an interview with Ben Swann, reported over a week ago that his sources, at the BLM and Vegas Metro, told him that a raid was already being planned:

According to Mack, the so-called retreat was nothing more than theatrics. “It was a ploy to get people to back off, to get people out of the way. They weren’t expecting us to get this amount of people here. They were surprised by the numbers and so they wanted a way to get us out of here. This was a ploy to get us out of here and then they’re going after the Bundys.”  Mack said that when he was at the Bundy ranch on Saturday there were an estimated 600 to 800 protesters present when federal agents were releasing the cattle.

Again, this would seem logical. Regardless of how just or constitutional the BLM’s actions were, the federal government is not about to back off and give Patriotic Americans a reason to feel that they are regaining control.

It is simple psychology.

If Patriots are allowed to feel that they have won then the government begins to lose control and things could snowball quickly. I fully expect that there will be a strong response by the federal government, whether bloodshed results or not.

We should all expect that. We just don’t know when it is coming.

I must admit that I am taken aback if only 50 remain at the Bundy Ranch. Keep in mind that this could be a media spin but, if true, it is unacceptable. If that is the level of focus and commitment in America then we have to find a way to overcome it.

I won’t sugarcoat it. It is embarrassing.

That does not negate the fact that the 50 who allegedly remain are heroes to many.

Below is the video report from Channel 8, Las Vegas: