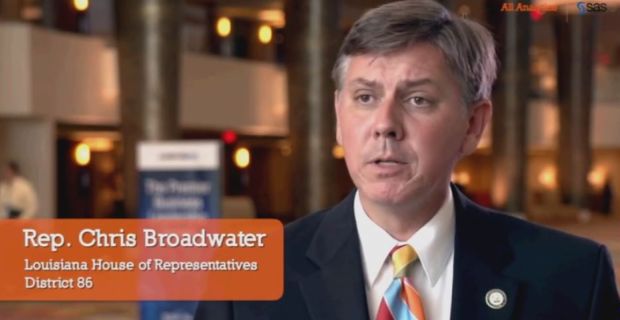 Authorities in Louisiana are compiling a database of information on every citizen in order to identify people who are “a risk to the state,” as well as pinpointing future criminals in an effort to allow the state to “intervene in that person’s life”.

Details of the program were recently divulged by Chris Broadwater, Republican member of the Louisiana House of Representatives from District 86, in a YouTube video which can be viewed above.

The Comprehensive Person Profile, developed by software company SAS, uses information from every agency of state government to compile personal data entries on Louisiana residents which are centralized on one database.

Originally set up to combat fraudulent workers’ compensation and unemployment insurance claims, the program was expanded to create a “centralized data warehouse” that allows “every agency within state government” to both submit and access data on every person within the state.

The purposes of the database, in the words of Broadwater, are to “detect fraud” and to identify people who are “a risk to the state down the road based upon the information we know about the individual,” enabling authorities to quickly identify “an individual who is going to be at risk of incarceration down the road,” a process that sounds an awful lot like ‘pre-crime’.

Broadwater remarks that the state having such a treasure trove of information about each individual will allow authorities to “intervene in that person’s life”.

The program is also being introduced under the guise of making the lives of Louisiana residents “better” by way of things like speeding up the process of renewing a driver’s license. Broadwater notes that during this process, state workers would be able to access information about the applicant’s children and make recommendations about health insurance.

Very little information about how the state of Louisiana is actually using the program is in the public domain besides what Broadwater reveals in the video above.

Activist outfit The People, LLC is calling on citizens of Louisiana to support Rep. Schroder’s HB 1076 (data privacy) bill, which would go some way to nullifying that information that could be shared with the state database.