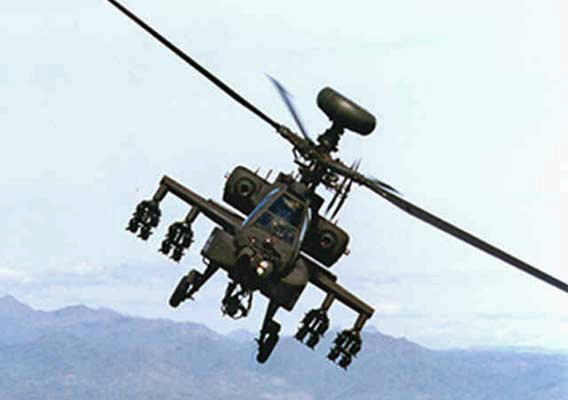 According to reports, the Army National Guard is pushing back against a plan to send every one of its 192 Apache attack helicopters to the active duty Army. Some may think this is no big deal. However, this is coming from an administration that loathes the military and wants to weaken America to the point that it cannot defend herself. The trade would replace the Guard’s attack helicopters with 111 UH-60 Black Hawks, basically transport and utility helicopters. This trade comes amid claims that there are deep budget cuts, according to Obama’s own sequestration. Make no mistake, this is an attack on the Second Amendment.

The restructuring would also eliminate three of 13 combat aviation brigades from the Army, while the Guard would phase out its entire fleet of OH-58 Kiowa Warrior scout helicopters, which have been in use for nearly five decades.

This shakeup of Army air assets amounts to some $12 billion in cost-saving measures through fiscal year 2017, Army Chief of Staff Gen. Ray Odierno told members of the Senate Armed Services Committee at a hearing Tuesday.

“None of us like what we’re having to do,” National Guard Chief Gen. Frank Grass told members of the Senate Armed Services Committee on Tuesday, the military website Defense One reported. “My big concern right now is figuring out how I’m going to move, and how many states I’m going to have an impact on, and what’s the cost of facilities and to retrain pilots. I’ve got to tackle that because the decision’s been made.”

Earlier this month, Grass told the House Appropriations Committee that the Guard “provided an alternative solution” that would transfer 40 percent of its Apaches into the active Army. This would allow the Guard to keep six attack battalions. They currently have eight.

“These are very difficult decisions and there will be more difficult ones yet to come,” she said. “His focus now is to determine the impacts and how best to implement the decision.”

According to the News & Observer:

Some military analysts have said that having a well-trained, combat-ready reserve force kept the country from having to re-institute a draft. At times during the post-9/11 conflicts, the guard has made up 50 percent of deployed troops.

“The National Guard right now is the best led and the best trained it has ever been,” said Col. Brian Pierce, commander of the 449th Theater Aviation Brigade, which oversees the 1-130th. “In my opinion, there is no difference between the two organizations now.

“But if we don’t look like them, and we don’t have the same capability as the active-duty component, how are we going to function as that strategic depth and that combat reserve?”

It’s not clear what would happen to the guard’s Apache attack battalions if the Army’s plan is carried out, which would only happen if it is incorporated into the federal budget. Some members might be transferred to other units, and a few might enter or return to the active-duty force.

The difference in flying a Black Hawk and Apache are night and day and that challenge of the Apache is greater, said Chief Warrant Officer Christopher Wilson.

“It’s not even comparable,” he told the News & Observer before boarding an Apache to perform an annual evaluation of a pilot. “This is one of the most sophisticated and advanced attack helicopters in the world. Flying this air frame is not like anything else.”

Wilson, 45, has served in the Guard for 20 years. He is a veteran of the first Gulf War, Afghanistan and Iraq.

National Guard Association spokesman John Goheen warned that this will present problems down the road due to lack of experience.

“We’re just going to squander that experience? These are some of the most experienced pilots and maintainers in the Army. Basically, we’re going to say to them, ‘Get out, or we’re going to have to retrain you in something else.’ Where is the savings there?”

“They don’t want to be in a service that isn’t in the fight,” Goheen said. “Ours is a force full of people who want to be on their feet, with a rucksack on their back, doing things, getting their hands dirty. If the nation goes to war, they want to contribute. It’s not a team you can put on the bench, and I think that’s the fear.”

According to Maj. Gen. Gus Hargett, who heads up the National Guard Association, he believes the entire issue is an insult to those that serve in the Guard.

“For me personally, I’m insulted by it. Most guardsmen that I talk to, they feel insulted,” he said. “They feel like they are now being told after 12 years of war that somehow they are just not the equal to the active guys.”

While some continue to push the idea that Black Hawks are best suited for dealing with natural disasters, something the Guard has been involved in many times, Gen. Hargett says the Guard already has plenty of Black Hawks.

“You know, we filled the skies of New Orleans (during Hurricane Katrina) with Black Hawk helicopters from the Guard,” he says. “How many can you put in the sky at one time? How many do you need at one time?”

In the event of another war and the Army depleting the Guard’s Apaches, it will lead to less reserves being available. “We will have no Apache helicopter pilots sitting on the bench to go in the game,” Hargett said.

All 50 governors sent Barack Obama a letter opposing the removal of the Apaches from the Guard.

According to the letter, the governors called for reconsideration, understanding what it is to be the head of the executive branches of their respective states. “Two years ago we opposed efforts to dramatically cut personnel and equipment from the Air National Guard,” the letter reads. “Congress subsequently chose not to impose the cuts and called for a National commission on the Structure of the Air Force. That commission recently concluded that the Guard is a cost-effective and invaluable force that should be a critical component of the total force structure. The commission’s conclusions and the ongoing Army debate strengthen the case for a similar independent review of the Army’s future force structure and active and reserve component mix.”

First, we continue to spend more money at the federal level than we did in previous years. Second, this is rather curious coming from the Obama administration, as it takes helicopters that can be used by the states to defend themselves, and keeps reservists properly trained. Additionally, it simply replaces them with fewer “flying transport” helicopters, more useful for natural disaster recovery operations than fighting.

We’ve pulled out of Iraq. Our forces are lingering in Afghanistan. There should be no need to transfer the Apaches from the National Guard to the US Army. Lest you think this is not planned, consider how many millions of dollars are being spent on the Obamas vacationing every single month of the year. As a friend of mine has said, this doesn’t smell right. There is something amiss here and I think we all have a pretty good idea what it is.

Meanwhile, Rep. Joe Wilson (R-SC) introduced a bill in January that is languishing in committee, which would block the transfer. Wilson issues a statement saying, here were times during Operation Iraqi Freedom when the Army National Guard represented 50 percent of the Army’s combat power.”

Wilson’s bill has bi-partisan support from 41 Democrats and 111 Republicans. It also calls for a commission to study the proposed changes. Of course, Obama says that’s not necessary. Why? It’s because this is exactly what he wants. Make no mistake. This is as much an attack on the Second Amendment as any legislation that targets the guns you own.

UPDATE: It has just come to my attention that the treasonous Obama administration just pledged 10 Apache helicopters to Egypt on Tuesday. Where do you suppose those Apaches will come from? RT reports:

Delivery of the choppers is intended to aid in counterterrorism operations, the Pentagon said in a statement Wednesday, but comes only months after the US first suspended military aid to Egypt after the country’s interim government began harshly cracking down on dissidents and protesters.

According to the statement released by the US military on Wednesday, Defense Secretary Chuck Hagel told his Egyptian counterpart, Col. Den. Sedki Soby, that US President Barack Obama has authorized the decision to deliver the helicopters.

Next, the Pentagon said, US Secretary of State John Kerry “soon will certify to Congress that Egypt is sustaining the strategic relationship with the United States and is meeting its obligations under the 1979 Egypt-Israel Peace Treaty.” That deal between America’s top Middle East ally on Egypt has for decades allowed Cairo to stand as one of the largest recipients of US military and economic aid.

“The Army’s Aviation Restructuring initiative should be monitored closely. In addition to introducing legislation, Congressman Wilson will continue to work on this issue with House Armed Services Committee Chairman Buck McKeon while crafting this year’s National Defense Authorization Act (NDAA). He and many other Members remain deeply opposed to the Army’s plan to remove all AH-64 Apache helicopters from the Army National Guard and will work closely with all interested parties to ensure these resources remain intact.”