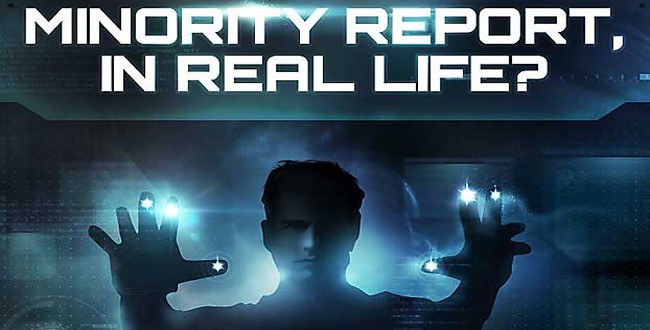 With revelations that the National Security Agency has collected some 20 trillion phone calls and emails via an expansive nationwide surveillance network, most Americans have already come to the realization that everything they do is being monitored.

But many shrug off Big Brother’s prying eyes by suggesting that, since they aren’t doing anything wrong, they have nothing to worry about.

That may have been true several years ago, but the digital surveillance systems of today are far more advanced than most people understand. No longer are these machines simply recording the data and storing them in some historical archive to be pulled at a later date should the government ever have reason to take a closer look at your personal life.

The next generation of systems are being used to actively monitor your digital interactions, surfing habits, conversations and daily sentiment in an effort to predict your future behavior. Nowhere is this more apparent than in the systems currently operating within the social media sphere.

Researchers at the University of Virginia funded by the U.S. Army recently demonstrated that they can not only gather information from your personal Twitter account just like the NSA, but also aggregate and analyze that information with advanced predictive algorithms designed to determine what you’re going to do next. In this case, the researches focused specifically on predicting crime by individuals, as well as in crime “hot spots” around the country.

Here’s the kicker. The algorithms being used don’t just look for obvious keyword phrases associated with criminal activity like “I’m going to kill you” or “meet me later and we’ll give him a beat down,” but focus in on routine activities, geo-location, and aggregate historical information to calculate the chance of a particular individual being involved in a crime at some point in the future.

Researchers at the University of Virginia demonstrated tweets could predict certain kinds of crimes if the correct analysis is applied.

A research paper published in the scientific journal Decision Support Systems last month said the analysis of geo-tagged tweets can be useful in predicting 19 to 25 kinds of crimes, especially for offenses such as stalking, thefts and certain kinds of assault.

The results are surprising, especially when one considers that people rarely tweet about crimes directly, said lead researcher Matthew Gerber of the university’s Predictive Technology Lab.

Gerber said even tweets that have no direct link to crimes may contain information about activities often associated with them.

Gerber said Twitter data can be relatively easy to use because tweets are publicly available, and many of them are tagged with location information.

In addition, researchers, themselves, do not need to go into the high-crime areas to study the information.

Instead, “I send our algorithms to these locations and see what people are talking about,” Gerber said.

“The computer algorithm learns the pattern and produces a prediction.”

The study was funded by the US Army, which Gerber said uses similar techniques to determine threats in places such as Iraq and Afghanistan.

It’s no surprise then, that police departments all over the country are interested in the new technology. The New York Police Department has already showed asked for a demonstration.

To give you an idea of how this technology can be used to not only predict traditional crimes but domestic terrorism related activity, consider an earlier report out of Auburn, NY which indicates that the Department of Homeland Security is asking local businesses to keep an eye out for terrorists going so far as to provide retailers with a shopping list of possible items a terrorist might purchase such as MRE’s (Meals Ready to Eat), flashlights and other products readily available at local surplus shops and camping stores. The implications of these new algorithms, which will be taught that anyone discussing the purchase or ownership of these types of items should be flagged for review and visited by Homeland Security personnel as a person of interest, are staggering.

With the definitions for domestic terrorism being expanded to include everyone from kids making gun-like gestures with their hands to Americans joining a large protest against government over-reach, it’s only a matter of time before just about every American with a gripe or opposing view is flagged, investigated and incarcerated for a “crime” that they “may” commit in the future.

Though the notion may seem far fetched to some, this technology is being designed for a reason. Given the ever expanding intervention and interference of government into our lives on every level by way of relentlessly supplanting our protections under the U.S. Constitution, are we to believe these developing technologies won’t be used strike fear and compliance into the hearts and minds of Americans?